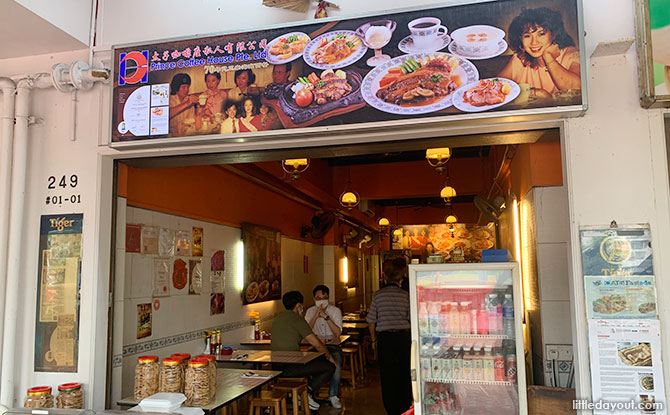 Situated in a shophouse along Beach Road and a stone’s throw from Arab Street is Prince Coffee House, a throwback to the 1970s with a menu of both Western and local Chinese dishes.

In the past, there was a strong connection between the Hainanese in Singapore and the British army, hence leading to the rise of many Hainanese Western restaurants. Places such as The Ship, Mariners’ Corner and ColBar are some of these establishment that survive to this day. Another old school place which serves up Hainanese Western food is Prince Coffee House.

We paid a visit for lunch and made our way into the narrow shophouse. The tables had red chequered settings, a hallmark of many old school Hainanese eateries.

The main entree selection on the menue included Grilled Pork Chop, Trio Lamb Chop, Grilled Chicken Chop and Fried Fish & Chips. These are between $15 to $16. The Grilled Tenderloin Steak is $32 and so is the Prince’s Special Ox-Tail Stew.

We also had a Set Lunch (available between 11 am to 2 pm) and the menu items for the day was Chicken Cutlet. 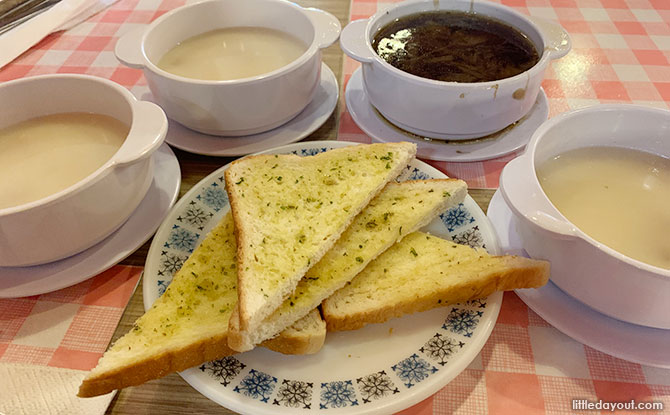 The entree items can be “topped up” to a set with soup, drink and dessert for $4.

The food isn’t bad. In fact, the Hainanese Pork Chop, which came on a pile of fries and covered with tomato sauce and onions, was quite tender and crisp on the outside. The Grilled Pork Chop was a decent sized portion and juicy too.

For a selection of other Hainanese western food, you can check out The Ship (especially its Chicken Maryland) and Mariners’ Corner.