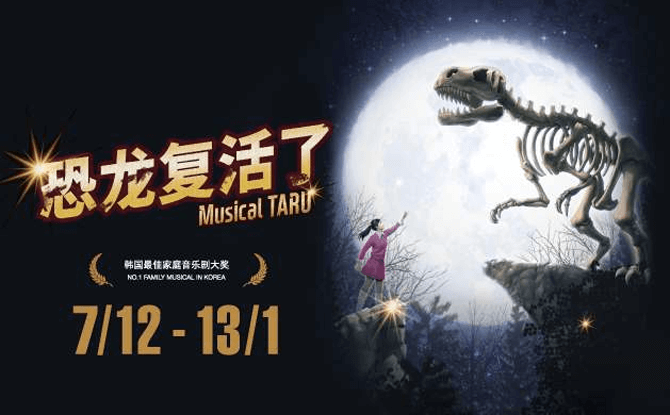 Musical TARU is now on stage at Resorts World Sentosa till 13 January 2019. This family-friendly musical adventure features dinosaur puppetry and a “night-at-the-museum” storyline. Originally a Korean production, the version on the Resorts World Theatre stage is presented in Mandarin with English surtitles.

The story of Musical TARU is based on the adventures of a pair of siblings and a budding archaeologist. The trio find themselves together inside a natural history museum late one night. As it so happens, a lunar eclipse occurs while they are at the museum, magically bringing the museum’s exhibits to life.

So what exactly is TARU, you may be wondering?

TARU is the name of the museum’s baby T-Rex fossil – similar to how the Lee Kong Chian Natural History Museum calls it own “baby” dinosaur fossil, Twinky. Unfortunately, TARU has gone missing and it is left to the three adventurers to track him down with the help of museum’s re-animated exhibits.

One of the highlights of Musical TARU, which will appeal to kids in the audience, is the dinosaur puppetry. This includes a 2.5 metre tall T-Rex fossil which roams around the stage.

The show also features kid-friendly themes such as friendship, parental love and exploration. You can also expect plenty of music and dancing too. Kids will appreciate the joke and physical comedy.

Those who may be worried about following the Chinese dialogue can read the English surtitles by the side of the stage.

The Resorts World Theatre version has also been adapted for the local audience by setting it in Singapore. It is part of the three-market theatrical collaboration involving Singapore, Taiwan and South Korea.

Musical TARU at Resorts World Sentosa features a local and overseas cast. Taiwan-based actor and singer Wong Jinglun plays the role of Da Fa, the archaeologist. Taiwanese singer Freya Lim is Cleopatra, one of the museum exhibits brought to life and local singer, Ling Xiao, is the museum’s comedic Curator.

Musical TARU runs for approximately 80 minutes without intermission. Tickets are available through SISTIC.