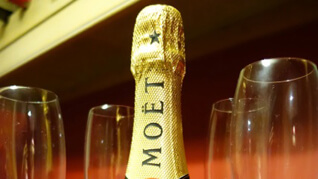 Ever since our little boy J turned 3, he has shown an increased curiosity and awareness about the happenings around him and his immediate environment. With that in mind, we did some research about Christmas traditions in UK (which is where we are now based) and tried some out over Christmas.

We had glittery reindeer food (a mixture of cereal, birdfeed and glitter) for J to sprinkle in the garden to guide Rudolph to our house; we also put out a mincepie for Santa and a carrot for Rudolph by the fireplace.

The next day, J was most impressed to see a bite in the mincepie and a half-eaten carrot and presents laid out under our Christmas tree. While I had some reservations about leading my boy to believe in Santa and Rudolph, I decided that it was a lot of fun for the young in the lead-up to Christmas and does seem to give some sort of “structure” to the event.

With Mission Christmas successfully carried out, it started me thinking about doing something for New Year… hence Mission New Year Resolutions 2014.

Daddy Low and I are not active people when it comes to making New year resolutions. We like to have some quiet time with a nice drink to reflect on the year coming to an end and ruminate about a possible list of “resolutions” to set some direction for the coming new year. However, we usually do not have the strongest will to see them through. So, for many years, New Year’s Eve has been more of a contented sharing of each other’s company.

This year, with family responsibilities weighing on one’s mind and as one’s offspring gains a keener awareness about their world, the parental instinct kicked in to do the right thing and inculcate some positive habits in their young.

How Do I Make New Year Meaningful?

My mind buzzed with ideas on how I could make the start of a New Year meaningful for my little boy. The teacher in me focused on the approach and I worried about my “lesson plan”, while my Daddy Low, was bursting with ideas about the content – how we should be more focused on a more activity-driven family life, and preferably featuring more outdoor activities, the frequency, the nature of activities etc…

As it happened, this New Year, we had friends staying with us as we “crossed into” the new year. This meant that we could enlist three more children (ranging from two and a half to four years old) to participate in Mission New Year Resolutions 2014.

This made the former teacher in me all excited – I had a mini-class to lead!

I was so excited that I got all the adults to participate in brainstorming. And everyone was positive and supportive, but in all honesty, also very tired. As you can imagine, when four young children are on an extended sleepover, there is very little possibility of an early sleeptime… and only then could any serious conversations begin.

In the end, everyone was happy with my proposal to have two components to Mission New Year Resolutions 2014 – one on making new resolutions and one focusing on appreciating friendships.

I would explain the concept of making new year resolutions to the kids. Then, the adults will help them to come up with and focus on their key resolutions. We would pen them down for each child on a piece of paper and the child would decorate it to make it their own before putting it into their designated envelope. We would keep these envelopes and take them out at regular intervals in the new year for the child to see if he has been keeping to his resolution.

We would give the children some craft materials (paint, stickers, glitter etc) and they would make two friendship cards each: one for another child, and one for their parents.

I can hear you laughing… Yes, I know, it all seems ridiculously idealistic to imagine that we could do all these with two to four-year-old children. I think we were either all too tired or a bit tipsy. Either that or my friends were too kind and polite to break it to me that I must be out-of-my-mind to think I could run this “lesson plan” with a set of preschoolers!

On an activity-packed New Year’s Eve, by late afternoon, I was already feeling my energy seeping away and an inner voice whispered at me, “Give it up. You are tired. Everyone’s tired. Forget it.”

Sadly, in the end, we did not carry out the plan. When we reached home, one child had fallen asleep and the men bundled up the remaining kids for their bath and the women set about getting dinner ready. And after dinner, the kids wanted to play and before we knew it, it was nearing their bedtime and the children were clamouring for their bedtime story.

So, What is Special About the New Year?

With the little ones finally in bed and ready to sleep, I made a final valiant effort and said to the them, “Today is a very special day. Do you know what it is?”

The children grew wide-eyed with curiosity and I explained that it was the last day of 2013 and when they woke up, it would be a new year, 2014. As I looked at each of the little faces, I could see the older ones start to understand, while the little ones just listening blankly. I suddenly had the panicky thought: Do they even understand the concept of “the year”? Nonetheless, I pressed on and said that it is a very special day and it is very wonderful that we were sharing this special moment with our friends. And that to show our appreciation for each other, and for our friendship, I would like each of them to hug the person next to him and say “Thank you for being my friend”.

It was a very funny moment then, because it is as if Time froze and no one moved. Slowly, two of the older ones hugged, but did not say anything. Firmly believing a hug and saying the phrase was a simple and totally doable exercise, I repeated the instruction and the phrase to them, thinking they didn’t catch it. After persisting for a while, the older boy who did nothing finally let out a whine, “But I don’t want to hug… because I am tired!”

And at that very moment, I “woke up”, like the emperor in “The Emperor’s New Clothes”. Of course, silly me! What was I expecting? They are children and it was way past their sleeptime. If it was extended play time, they would have happily join in, but they were stuck with an obstinate adult going on and on about some mumbo-jumbo about resolutions (“What are resolutions, Mummy/Auntie?”, they must be wondering) and insisting that they hug each other when they should be going to sleep.

Suddenly, I heard my inner voice laughing. And I relaxed and smiled at the children and said, “Yes, of course, it is time to sleep.” My friend and I tucked our children in bed and bid them good night. 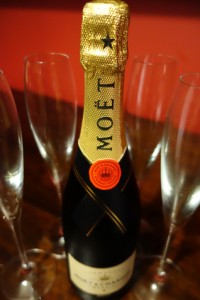 We trooped downstairs and joined the men and before long, we were all relaxing in a comfortable, dreamy langour. The Moet was ready and waiting to be popped when the clock struck midnight, but we forgot about it as we lazed happily in each other’s company and saw the year through.

Goodbye, 2013! And welcome, 2014! I shall keep my “lesson plan’ for another year and hopefully I remember to use it before the boys grow too old and refuse to participate in what they might then deem utterly boring… Chin chin, everybody!

How did you mark the start of a New Year with your kids? Let us know by dropping us a note at hello@littledayout.com.