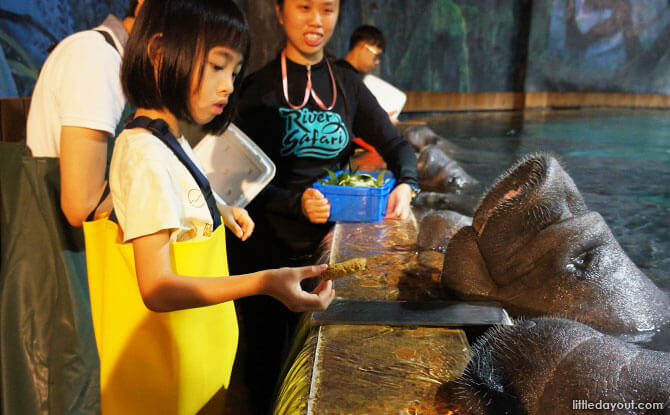 Wai Ling and her family went on the Manatee Mania Behind-the-scenes Tour At River Safari for an amazing encounter with mammalian sea cows. She discovers that the huge aquatic animals are good at eating their veggies and have pretty good table manners despite being known for farting in the water.

“Good boy,” I said, patting the head of the cutie in front of me.

This was no doe-eyed cat. Nor was it a fluffy toy-sized dog.

We are talking about a 600-kg manatee, with huge creases around its nose, thick wet lips surrounded by short wiry whiskers, beady eyes on either side of its head, and a figure that looks pregnant all year round!

It might not have everything going for it in the looks department, but it was such a gentle giant, it completely stole my heart!

Getting to Know the Manatees Behind the Scenes

I was on the Manatee Mania behind-the-scenes tour at River Safari with my husband and six-year-old. The tour started at 9.30am, before opening hours, so we could walk around the Amazon Flooded Forest without having to combat crowds, following our guide of course!

We got to see the otters devouring their breakfast of fish, touch a real arapaima scale – arapaimas are freshwater fishes with scales that are so tough, they are being used in the research and development of bullet-proof vests – and even hold a manatee’s skull! (Unlike the arapaima scale, the skull was a replica.)

The highlight of our tour though was the chance to interact with the manatees and their aquarists, who are the equivalent of zookeepers for aquatic animals.

Our guide brought us through a staff-only doorway, into the back of the manatee enclosure. Here, we were greeted by two aquarists, who shared with us about their work and the manatees in their care.

Did you know that manatees are very affectionate creatures? According to the aquarists, the babies hug them and chew their hair playfully in the water. They also like to be patted on the head when they have done well, much like kids!

It was a very interactive and educational session. Everyone had fun learning all about the manatees from the knowledgeable aquarists who obviously love their charges very much.

From Feeding with Caution to Falling in Love

More fun was on the way! We were helped into our bulky waders by the aquarists and their very nice supervisor. The little one was then presented with a basket of fresh vegetables. “We need your help to feed the manatees,” she was told.

The 12 manatees at River Safari eat 200kg of vegetables a day! But their favourite food is a high-fibre biscuit that smelled like dog food to me. The strategy, therefore, was to feed them the vegetables first, before moving on to the biscuits. Makes total sense!

We walked clumsily to the manatees’ enclosure, where we had to carefully descend a few steps to the elongated space behind the tank. From here, we could reach out to feed or pat the manatees that came our way.

Almost knee-deep in water – hence the waders – we were taught how to feed the manatees. Because a manatee’s eyes are on the sides of its head, it cannot see what you are feeding it if you push food into its mouth from the front. There is a high chance it will reject your offering this way. So you have to first bring the food to the side to show the manatee, before putting it into its mouth!

The little one was both fascinated and a little wary, even though we learnt earlier that manatees do not have teeth at the front of their mouths. They would not be able to bite us when we fed them! But the manatees were so gentle and slow in movement, she eventually overcame her fear and offered them the food.

We were introduced to Eva, the largest manatee at River Safari, weighing a hefty 1,200kg; Pedro, the oldest at 39 years old, and Canola, River Safari’s animal icon.

The aquarists recognise every one of the 12 manatees at the enclosure, by their body markings, scars, and even the shape of their eyes! Their mannerisms also give them away. For example, Eva is the only one who tilts her head back and pushes her nose high up in the air during feeding time.

Each manatee is trained to recognise a different colour so that aquarists can communicate with them individually using coloured sticks. I was impressed with how obedient they were: They never fought for food. They ate their vegetables even though they knew their favourite biscuit was on the menu. It just felt so relaxing to be spending time with them – looking into their kind eyes, feeding them, and patting them on their heads.

All too soon, the food was gone. We learnt how to tell the manatees that the meal was over, by shaking our hands in a “no more” gesture, like what we do with little kids.

It was hard to say goodbye. Till we meet again, cuties!

The Manatee Mania behind-the-scenes tour is available daily from 9.30 to 10.30am for a maximum of eight people at a price of $118 for an adult and $72 for a child. Bookings are compulsory.