Haw Par Villa, Singapore’s longest-running cultural theme park, is set to officially relaunch on Thursday, 28 October 2021, with the opening of Hell’s Museum, a space dedicated to encouraging the discussion and thought about death and the afterlife.

The museum has also incorporated the world-renowned Ten Courts of Hell, which is based on Taoist and Buddhist teachings of punishments in the afterlife as part of the museum. The museum is split into 10 different stations, each providing unique comparative insights on how death and the afterlife are viewed and interpreted across religions, cultures, and the ages.

Each section features specially commissioned videos and multi-media elements that will offer visitors a better understanding of the commonalities across the world’s major belief systems and communities that draw meaning from death and dying.

The entire museum stretches for over 3,800 sqm and will bring visitors through some of the park’s 1,000 statues and 150 dioramas. There are also different sections of the park that have been enhanced to better present information about the various topics. 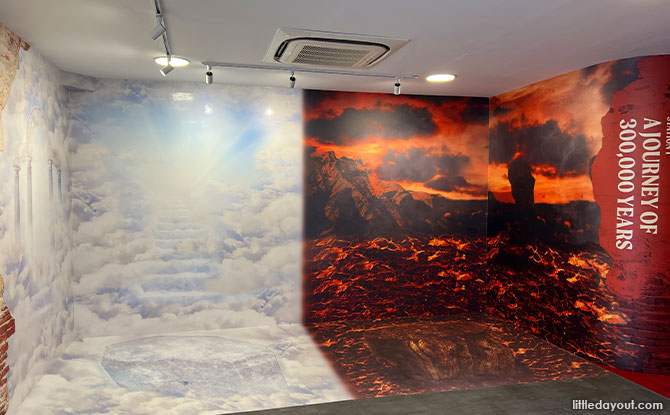 Here is an overview of the 10 different sections that one can find at Hell’s Museum.

Upon entering, visitors can purchase their “tickets to hell” and also start their journey by taking a picture at a trick eye section.

Visitors can take a picture representing the never-ending struggle between Heaven and Hell in this interesting photo spot. Watch a well presented and insightful video that sets the premise of discussing the usual taboo topic of life and death. Visitors are encouraged to watch the video and follow the route to all 10 stations. We enjoyed the meaningful facts brought up in the short video and highly recommend starting the journey with this station.

Station 2: Purgatory and Permanence – Paths into the afterlife 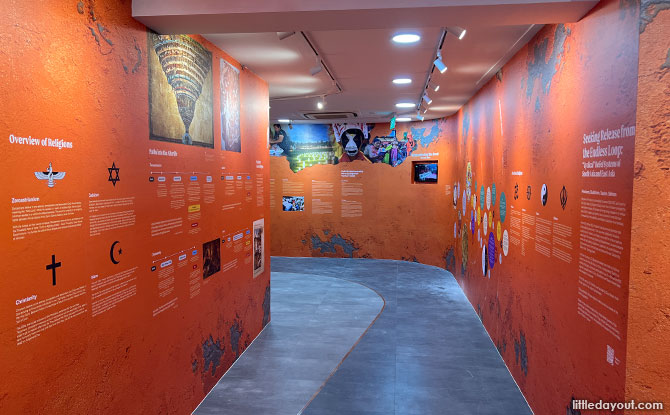 This section explores the question of “What happens to us when we die?”. The question is answered through the lens of time and the various religions that fit under the belief of time being cyclical or linear. This is also where visitors will explore the various ways of commemorating the dead. There are two alters that are taken from cultures oceans apart but show the commonality of needing to make a connection with the dearly departed and the need to reassure oneself about one’s fate in the afterlife. This section discusses the practicalities of funeral rites and the disposal of the physical remains of the departed. This station will also allow visitors to dig deeper into how a densely populated and land-scarce Singapore manages the practicality of death. There is also a recreation of a burial crypt which is currently used in Choa Chu Kang Cemetery, the only place in Singapore still open to burials today. Visitors can step outside into the museum’s very own “Graveyard” showcasing Singapore’s unique void deck funerals. There are also various posters are explaining the significance of the different items at the traditional funeral. There is also a recreation of a traditional burial site at Choa Chu Kang cemetery. This section covers the practice of prayers and verses that cover the topics of death and the afterlife. Certain beliefs see prayers as a form of petition for departed souls while others as an encouragement and reminder for the living. 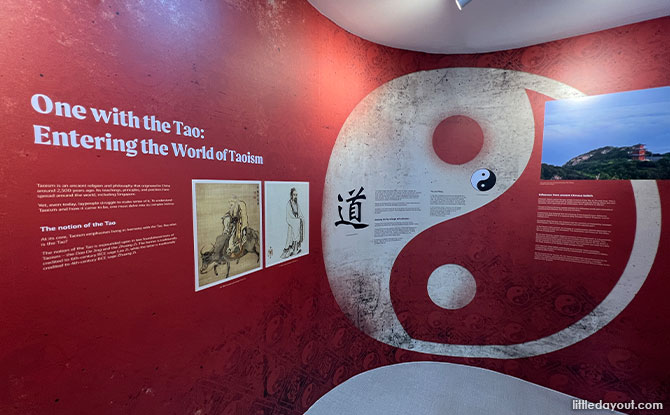 The fifth section covers the different Buddhist and Taoist icons, as well as their different beliefs and practices. This better sets visitors to understand the premise on which the 10 courts of Hell are based. They can also read about the effigy Da Shi Ye, also known as the “King of Ghosts”. They are the enforcer of discipline in the netherworld and has a fierce and frightening demeanour to keep malevolent spirits from harming the living. Built as a warning to live a virtuous life, many might be familiar with the disturbing dioramas illustrating the judgments in hell awaiting liars, cheaters, murderers and other unsavoury characters.

The descriptions of the different courts have been edited to be more factually accurate to the beliefs are also now presented on a backlit display so that it can be more easily read. This section is where visitors can see the different sculptures and dioramas based on stories from an ancient compilation. These sculptures tell the traditional beliefs on core values such as filial piety. Karmic theory can be and is commonly related and to Buddhist concepts. Here, visitors can see a diorama that depicts this core concept. The village temple in Hell’s museum was built by workers of haw par villa and has now been enhanced with elements for visitors to have a deeper understanding of shrines and its elements such as divination sticks and commonly seen deities. 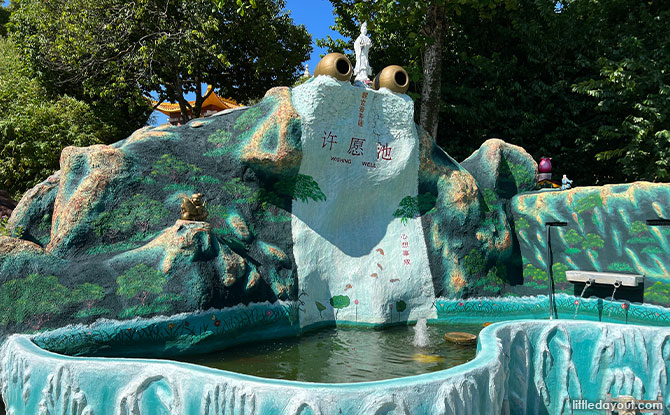 Visitors will end their journey at Hell’s Museum at the Reflection section. The structure seen at this site has an interesting background story as the gentle water features were meant to “contrast the stronger energies” of the dragon structure that was previously present on site.

How to visit Hell’s Museum Hell’s Museum will be open to the public daily from 29 October 2021, with tickets priced at $18 for adults (13 years and above) and $10 for children (7 to 12 years only). Due to the subject matter, children under the age of 9 years old are not encouraged to visit the museum.

Members of the public are invited to join the official relaunch of Haw Par Villa and the opening of Hell’s Museum on 28 October at 6.30 pm via a Facebook Livestream at the link here.

Read more about Hell’s Museum at the site here.