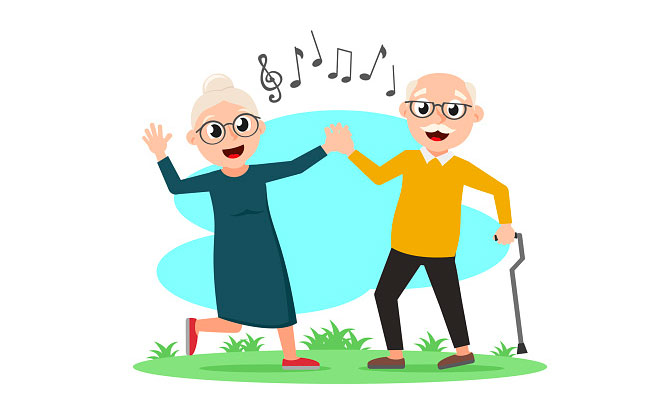 Grandparents always have such an interesting perspective since they have such different life experiences and stories to tell. Some are heartwarming and some are really hilarious. Here are some great jokes about grandparents that you can tell to almost anyone for a good laugh.

Grandparent Jokes That You Can Laugh Out Loud At 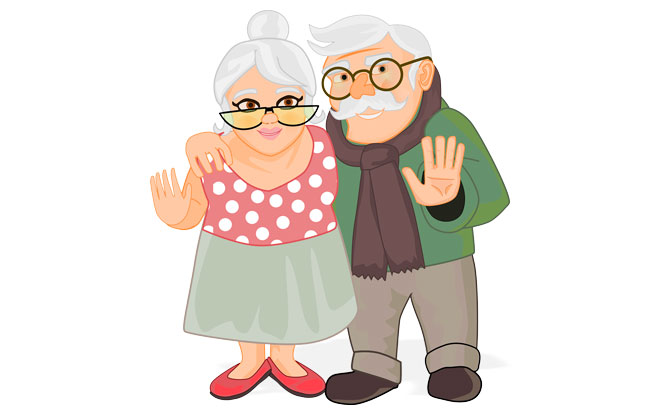 1. Why did Grandpa get banned from the zoo?
Because he had a lion’s heart.

2. Why did dad put wheels on grandpa’s rocking chair?
Because grandpa wanted to Rock-n-Roll.

3. Why did my grandpa get a man in slim-fit jeans drinking an avocado smoothie to come home?
Because he was my grandpa’s hip replacement; just like my grandpa, but hip!

4. Why did grandpa refer to grandma as Insta-gram?
Because she was on his speed dial.

5. Why did grandpa’s origami business go out?
Because it folded.

6. How would grandpa react when you tell him about online classes?
He would say, “Why is your education on the line? How will that work?”

7. Why is grandpa always smiling at grandma?
Because he cannot hear anything she says and doesn’t want to upset her.

8. Why did grandpa tell the ghosts about his shirt size?
Because he was the medium.

9. Why did grandpa love grandma so much that he called her love, honey, darling even after 60 years of marriage?
Because grandpa had forgotten grandma’s name.

10. Why are grandparents and grandchildren always close to each other?
They both have a common enemy at the homefront who makes a fuss about eating sweets.

11. What are the two things your grandpa doesn’t like about you as a little boy?
One, you don’t want to sleep in the afternoon. Two, you won’t let him take a nap either.

12. What did grandpa say after reading ‘Karaoke Tonight’ at a restaurant?
He just asked what sort of fish that was.

13. Why do people give a shout-out to their grandpa on their birthdays?
Because that is the only way grandpa can hear them.

14. Why couldn’t grandpa find freedom hen he left to travel abroad?
Because he said that grandma followed him and arrived on the very next boat!

15. What happens when a boy, his father, and grandpa laugh so hard that they pee their pants?
You get to know that it runs in their jeans.

16. Why did grandpa like to wear glasses while collecting take out for dinner?
He goes to pick up the dinner with a contact-less drive-through.

17. How did the grandma stop my grandpa’s habit of biting his nails after 40 long years?
She hid his glass of teeth.

18. Why did the grandchild call grandpa a hipster?
Because grandma told him, hipsters buy clothes from thrift shops, wear glasses that are thick, and look different.

19. Why do you think grandpa says that he was made upside down?
Because his feet smell and his nose is always running.

21. What does grandpa say when a waiter asks about the food at the restaurant?
He points at our finished plates and confirms, “They almost didn’t like it.”

22. What does grandpa do when you tell him to change his hearing aid?
He doesn’t listen.

23. What did grandma say to grandpa, when he claimed that he let out a silent fart in the church?
She said, “Honey, you need to replace the batteries of your hearing aid”.

24. Who is the one that chimes every one hour?
A grandfather, who’s like the clock.

25. What did the tall grandpa say to the little boy?
You will have to do your own growing boy, my height won’t help you with that.

26. Why was grandpa counting pennies?
Because he was the only one with time and money in his hand.

27. Why do you think grandpa says that his wife makes cookies the fastest?
Because she just takes nana-seconds to bake them.

28. What would a lawnmower grandfather’s eulogy be like?
‘Now he’s lawn-gone’.

29. How are stars and fake teeth alike according to my grandfather?
My grandfather said, “These two come out only during the night.”

30. Why did grandpa like an ‘All-you-can-eat’ restaurant more than grandma’s cooking?
Because he could decide when he was full at the restaurant.

31. What do people call grandfather clocks?
The old-timers.

32. Why did grandpa say, “Ask grandma for picnic permission”?
Because it won’t be allowed if grandma said no!

33. Why didn’t anyone listen to my warning about the Titanic drowning?
My grandfather replied, “Because you were in the theatre, little boy”.

34. What is the best thing about being 100 years old according to grandpa?
Grandpa said, one get’s to live without peer pressure.

35. How does grandpa refer to grandma when she feels all crabby?
Hey there, old bae!

36. Why didn’t the grandpa use glasses even when he was an 80-year-old?
Because he likes drinking from the bottle.

37. What did grandpa say when everyone told him my father looked like him?
He said, “He’s a poor guy, don’t worry he’ll grow out of it”.

38. Why didn’t grandpa like the new walking shoes?
Because he unwrapped them and kept looking but they didn’t walk on their own so he thought they were broken.

39. What did grandpa call the movie ‘avatar’?
Smurfs for the grown-ups.

40. From what did grandpa say he suffered a high degree of stress?
From grandma.

41. Why did the grandpa say no to local anesthetic on the day of the operation? Because he was looking forward to an imported one.

42. What did grandpa name the Italian restaurant he started in grandma’s memory? Pasta Way.

43. Why didn’t anyone know where the grandfather was?
Because he started walking 10 miles every day since his 65-year-old birthday and now he is 95.

44. Why did grandpa have the dog beside him always?
So that he could blame the dog day in and out for all his gas leaks.

45. What did the lawyer grandfather say to the waiter who wrote the bill at the cash counter?
Whoever writes it, pays for it.

46. Why is today the last day that one can see 82-year-old grandpa?
Because he would be 83 tomorrow.

47. What is grandpa’s bedtime?
One hour after falling asleep on his rocking chair.

48. What confirmed the fact that grandpa should retire?
When he stopped lying about his age and switched to boasting about it.

49. How did grandpa react when his grandson told him he wanted to go abroad to study?
He said, “You sure got to study lots of boards”.

50. Why did grandma call grandpa spiderman?
Because she said, “That boy finds it difficult to get out of the bathtub”.

51. Why did grandpa yell ‘gallons, liters, pints’ the day after the Christmas party? Because he likes to speak in volumes.

52. Why did grandpa like spending more time with the grandchildren?
Because he got to play with toys that he couldn’t have.

53. What did the grandpa say when he couldn’t understand his grandson’s jokes?
He yelled, “Back in my days, at least jokes made sense!”

54. Why Einstein loved his parents and grandparents?
They were all relatives.

55. Why are kids like ice cream?
They’re great, but they can also give you a massive headache. You’re also supposed to enjoy them in moderation, which is why grandparents, aunts, and uncles have it best. 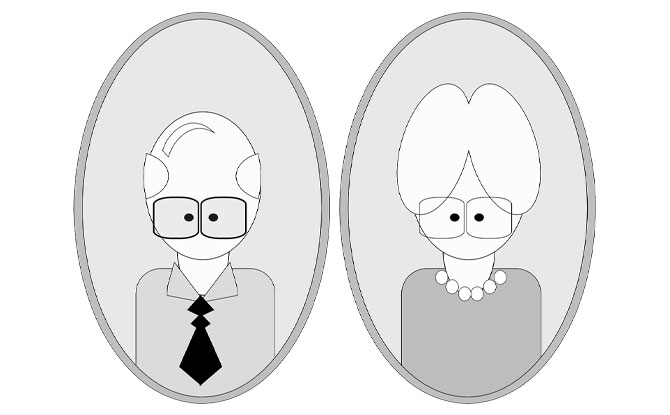 Looking for a good ole laugh? Here are some of the funniest grandpa puns and jokes that you can tell that even grandpa and grandma will approve of.

56. Today I went to visit my late grandparents but I accidentally visited the wrong tomb. It was a grave mistake

57. My Grandparents bought a new China set. They asked me what I thought of it.
I said it was fine.

58. How does the kid tell you that their grandparents called?
60s kids: Grandma called.

59. Shoutout to my grandparents. Because that’s the only way they can hear me

60. I find it really awkward that my Grandparents named my Dad’s sister “Vaccine”…
I’m embarrassed to tell people that she’s Auntie Vax.

61. My entire family was not supportive during my pregnancy, but my grandparents supported my decision. They are great grandparents.

62. My grandparents were vaporised in a freak accident. They will be mist

63. Myself, my kids, my parents, my brother, and my grandparents all have terrible diarrhoea. Runs in the family.

64. A Lumberjack is out working and has brought his son along to show him what he does, as he hopes the son will inherit the business one day. The following conversation occurs.

Son: Oh wow, ok! So why do you still use an axe? Why not use a chainsaw?

Lumberjack: Oh, this axe is special! This is the first axe your great-great-great-grandfather ever used when he first started this business over a century ago! It’s an old family heirloom, passed down from generation to generation and when you’re old enough I will pass it on to you!

Lumberjack: Yep! I’ve had to replace the blade and handle a few times, but it’s still the same axe!

65. How I plan on never becoming a Grandparent..
I’ll be naming my daughter pregnant so when a guy meets her.
Guy: Hi, I’m Jim.
Her: Hi, I’m pregnant.

66. A Polar Bear and his son were walking through the icy glaciers, when the little Polar Bear says to his father, “Dad… are we pure-blooded Polar Bear?” The father bear looks at his son and says, “Why, yes son, of course, we are!”

The next day the little Polar Bear is hunting for seals with his mother, and in the middle of the water, he stops and says, “Mamma… are we pure blooded Polar Bears?” Mamma bear looks at her cub and says, “Oh son, of COURSE, we are!”

The next day the cub is hunting with his grandpa, and in the middle of a big ice storm, the little Polar Bear stops his grandpa and says, “Grandpa… are we PURE polar Bear? Like, we don’t have any Black Bear, or Grizzly bear, or California Brown Bear mixed in with us?” Grandpa bear looks at him quizzically and says in his deep, gruff voice, “No, no, son… We are PURE Polar Bear, as far back as we go. Your great-great-great grandparents were all pure Polar Bears! Why do you ask, son?” The little Polar Bear looks up at his grandpa and says, “Because… I’m FREEZING!!