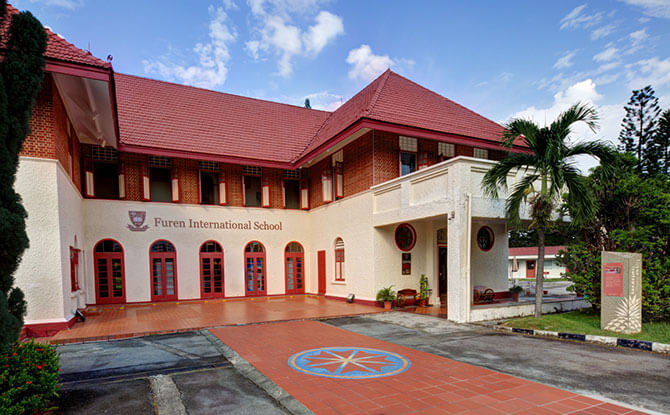 Standing at the end of Old Nelson Road, the Former Admiralty House has been known by many names. It was originally called Canberra House before becoming known as Nelson House and then, for a brief few years, it was the ANZUK (Australian, New Zealand, and United Kingdom) House.

Most recently, it was the premises of the Furen International School and is now vacant.

History of the Former Admiralty House

The Former Admiralty House was built in 1939, just before the outbreak of the Second World War.

Set on the top of a hill in present-day Sembawang, it was home to the Commodore Superintendent of the Royal Navy Dockyard. It was built close proximity to the Singapore Naval Base at Sembawang.

Constructed in the Arts and Craft style, it resembles a two-storey English country manor.

During World War II, it was turned into a strategic planning headquarters for key military commanders from the British armed forces.

An interesting fact about the Former Admiralty House is that its swimming pool is said to have been built by 200 Japanese prisoners-of-war after the Japanese occupation.

During the post-war years, it was the continued to be used by the military forces before handed over the Singapore government. It was turned into a space for Sembawang Shipyard’s recreational club and, subsequently, other operators.

It was in 1990 when an excavator collapsed through the ground during landscaping works, an underground bunker was discovered. The underground bunker is only 30 square metres and made use of a wooden shutter to close it off. Inside, there is a basic squatting toilet and colonial-looking light fittings.

In 2002, Old Admiralty House was declared a national monument.

In 2016, it was announced that the Former Admiralty House would be incorporated into plans for an integrated sports and community hub. The hub will be known as Bukit Canberra and include amenities likes a hawker centre, sports facilities and green spaces. Bukit Canberra is expected to be operational by September 2021.