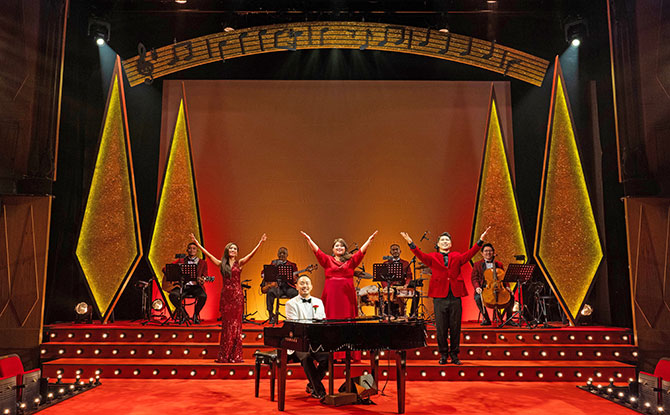 What do we know about Zubir Said (1907-1987), who composed Singapore’s National Anthem, ‘Majulah Singapura’ (Onwards Singapore) in 1958? To find out more, we caught W!ld Rice’s 2022 staging of “Don’t Call Him Mr. Mari Kita” on 22 July, significant in that it was also Zubir Said’s birthday. 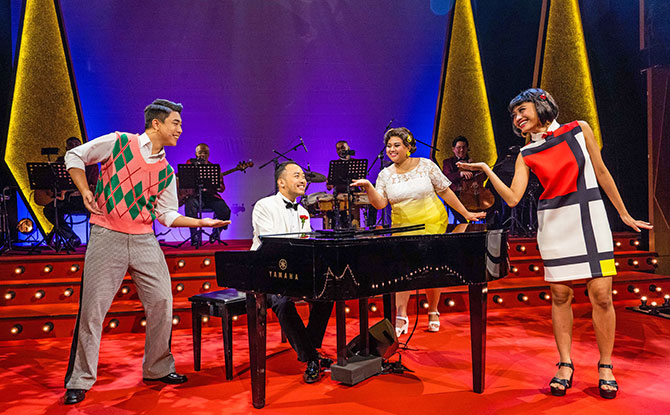 The brainchild of Julian Wong (Performer, Writer, Music Director and Arranger) and Cultural Medallion recipient Ivan Heng (Director and Set Designer), this creative production about the man behind the music, was brilliantly delivered with moving sincerity and exuberance, balanced with the occasional comic lines during the course of the show, along with a bounty of words and music.

Performing with Julian Wong, who was the lead narrator, were the supporting cast of Hannah Nordin, Malcolm Lim and Rohaniah Sa’id and a band of four musicians, Din Safari, Leonard Mikhail, Riduan Zalani and Ryan Sim. Their combined energy mixed with historical nuggets reinforced Julian’s sparkling presence as a compelling storyteller and musician, be it the masterful stretch of his fingers over the piano keys or violin strings, the tale relayed in a witty, engaging matter-of-fact manner, which connected well with the audience, with some of us singing along to familiar songs.

They took us on a heart-warming and informative musical journey that was an insightful tribute to the composer through glimpses into his rich personal history while navigating the historical backdrop and politics of the times. The varied and thoroughly enjoyable repertoire of songs chronicled his life, moving to the beat of keronchong, samba, waltz, rhumba, and joget rhythms while presenting a collage of dreams and dislocation, sentiment and nationalism, nature and nourishment, knowledge and education.

Ivan Heng’s striking set design in red and gold, with tall vertical diamonds (paying architectural tribute to the Singapore’s long-demolished National Theatre) framed by a golden arch of musical notes (transcribing the melody to “marilah kita bersatu dengan semangat yang baru/come let us unite with a new spirit”, from the National Anthem) and costumes by Frederick Lee referencing the era, added a visual treat to the vocal and musical excellence on stage. 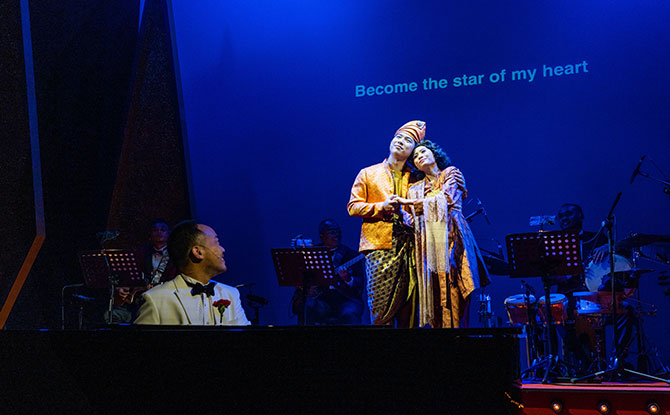 The 80-minute meaningful production was a joy to watch, touching hearts of young and old theatre-goers. Well-paced right up to the oh-so-familiar yet poignantly-played final song of the show, the rendition of ‘Semogia Bahagia’ offered an unexplored re-look into the Children’s Day song sung in Singapore schools every year.

Julian Wong embodies the ‘Semogia Bahagia’ spirit of pursuing and sharing knowledge, and being happy and blessed. Through careful research, he has explored and extracted Zubir Said’s songbook, giving new life to sixteen of Zubir Said’s songs with fresh arrangements, while remaining respectful of the composer-songwriter’s original intentions. It was a history lesson one would want to revisit to tell our own stories, through the medium of songs interspersed with historical elements, rendered as an energised mix of simple anecdotes.

In his later years, Zubir Said dedicated much of his life and energy to teaching students to learn, play and love music, including the late Music Director and Cultural Medallion recipient Iskandar Ismail, who went on to mentor Julian Wong. With four of Julian’s former students also performing in this show, it was a celebration of Pak Zubir’s musical legacy and his music’s power to unite people, the stories of Singapore’s artists, as well as the generative relationship between teachers and students.

It was a pity that many of Zubir Said’s songs have faded into obscurity and this narrative restoration of some of his musical gems won the hearts of the audience with a compelling show about Zubir Said’s life and convictions as a man beyond merely the composer of our National Anthem and what it means to be Singaporean.

He was a man of peace as a recurring word that kept cropping up in his songs was “sentosa” meaning “peace and tranquility” in Malay. In forging ahead, his self-drive was evident in the telling the story of a youth who pursued dreams and knowledge and won the battle against despair and dislocation. May we all battle against this.

The Power of the Story

Julian Wong wielding his storytelling power through the story behind the story with heart reminded us that our own generative stories have as much power as the ones we have been told. It was encouraging to see Pak Zubir’s living legacy and influence in the works.

With the echoes of a tale still lingering in our hearts, we left the theatre, warmed and inspired.