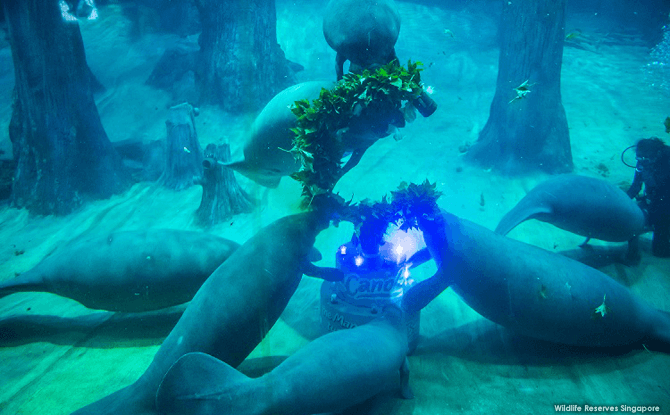 Canola the manatee, the River Safari’s animal icon, celebrated her third birthday in jazzy style with a soulful saxophones serenade and a cabbage cake.

Born at the River Safari on 6 August 2014, Canola is the offspring of Eva, the largest manatee at the Amazon Flooded Forest exhibit. Canola was abandoned by her mother at birth and had to be cared for by aquarists and bottle fed every two to three hours during the first three months of her life.

Since then, Canola has matured to become an affectionate manatee.

She is often seen approaching aquarists to say hello. She also approaches them and turns belly up as a way to ask for belly rubs.

During her third birthday celebration, local jazz saxophonist Daniel Chia played the tunes of Cali Style and Life’s A Beach to her in front of 60 invited guests. 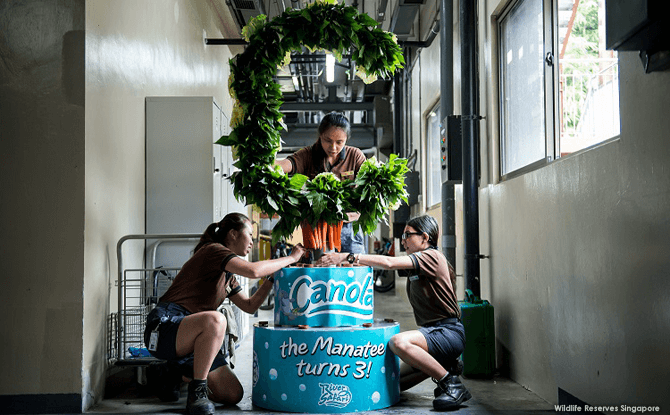 She was also presented with a two-metre tall, specially constructed cabbage cake topped off with a “C” for Canola. The birthday girl’s cake weighed in at 50 kg and had a top tier that consisted of 2 kg of cabbage, 2 kg of carrots and 9 kg of sweet potato leaves.

The cake was lit up with 12 LED lights that glowed blue underwater.

Dr Cheng Wen-Haur, Chief Life Sciences Officer and Deputy Chief Executive Officer, Wildlife Reserves Singapore said, “We are happy that River Safari’s animal icon Canola has overcome her early challenges in life, and is growing up healthy and happy with the manatee herd. As we celebrate her third birthday, our hope is that Canola will continue to thrive and inspire the community at large to act responsibly to keep rivers liveable for people and wildlife.”

Manatees are listed as Vulnerable in the International Union for Conservation of Nature’s Red List of Threatened Species. There are currently five males and eight females in River Safari’s herd of manatees.