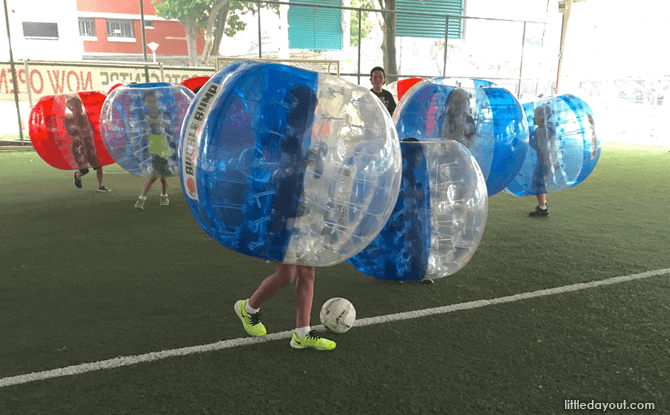 Anticipation was high as we watched the huge plastic balls being inflated. Everyone was curious what it would be like crawling inside and transforming into a gigantic Ribena berry with legs.

Thankfully, it didn’t take long to find out.

Get Ready for Bubble Soccer

Ben from Bubble Bump Singapore, with help of a young, able volunteer, kicked off the afternoon by taking everyone through a safety briefing. He demonstrated how to put on the bubble suit properly and, more importantly, how to get up if you wind up lying on the side (which you are guaranteed to do). 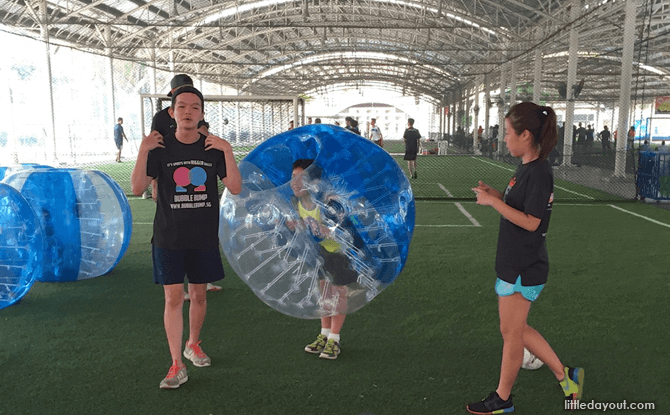 A quick warm-up later and it was time for the games to begin. Bubble Bump Soccer is played five-a-side. Bubble suits are colour-coded for easy identification of teams. Players need to be at least 1.2 metres in height in order to be tall enough to wear the 1.2 metre diameter kids bubble suits. Each suit is shaped like a huge round donut that the player has to climb inside of. 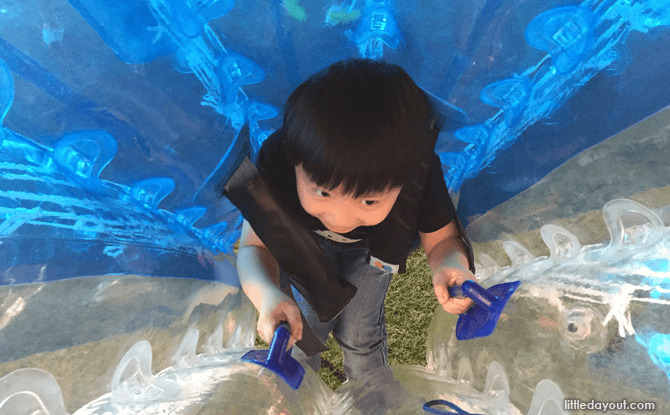 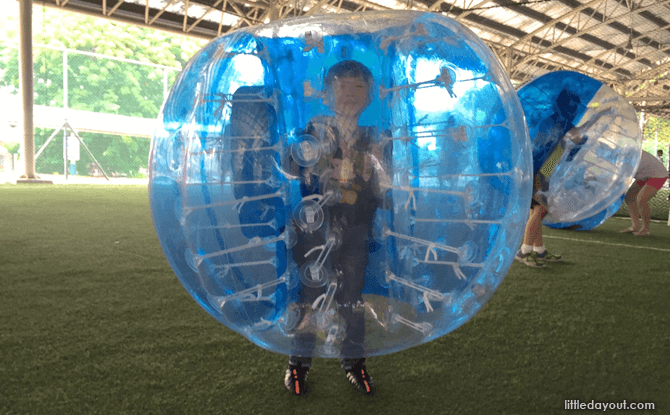 It took some time for players to get into the suits and get used to carrying them around. This also gave them a chance to practise falling down and getting up again. 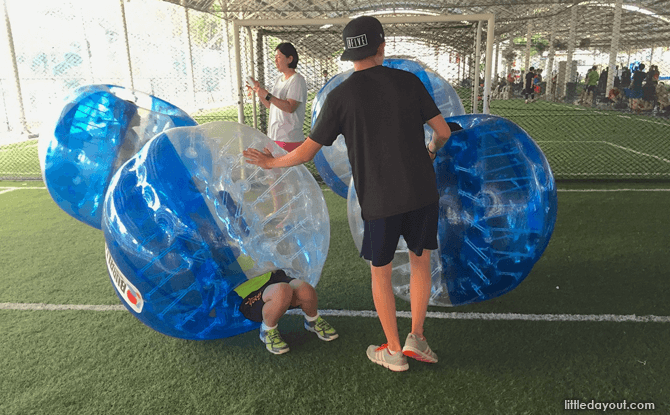 Once the whistle blew to signal the start of the game, it was hard for parents to contain their laughter at the sight of these huge balls on legs chasing after a football. The inflated suits kept players safe and protected even as they bumped into each other and went rolling around like Humpty Dumpty. 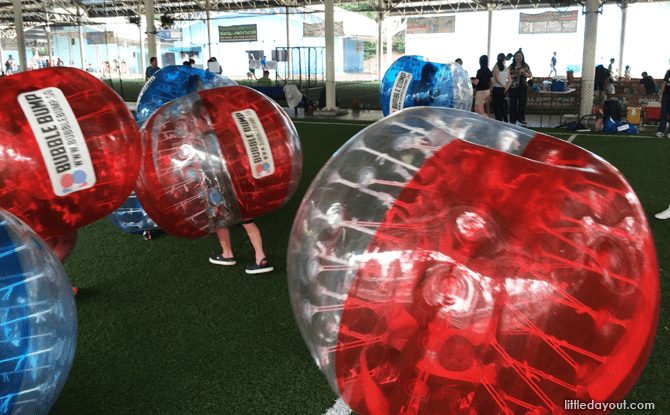 The five-minute game time was more than enough for the kids to get tired out. During the break, players helped themselves to the drinks and snacks courtesy of Little Day Out. 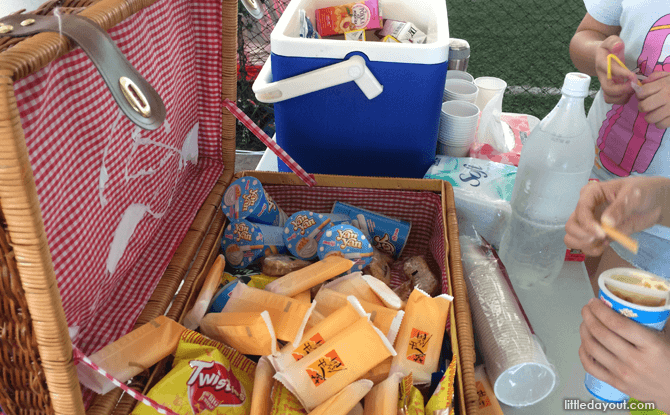 Younger kids were not left out either. Two poolball “tables” were set up at the neighbouring futsal court.

In poolball, players have to kick numbered balls into “pockets” around the table. However, kids mostly had fun having a free-for-all around the poolball table. The team from Bubble Bump also organised some games for younger kids to play using the numbered balls. 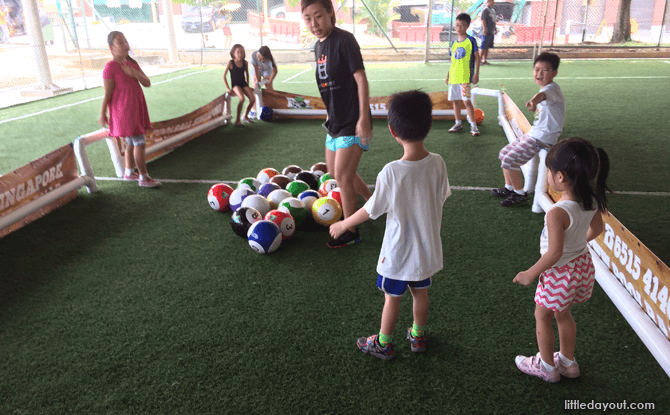 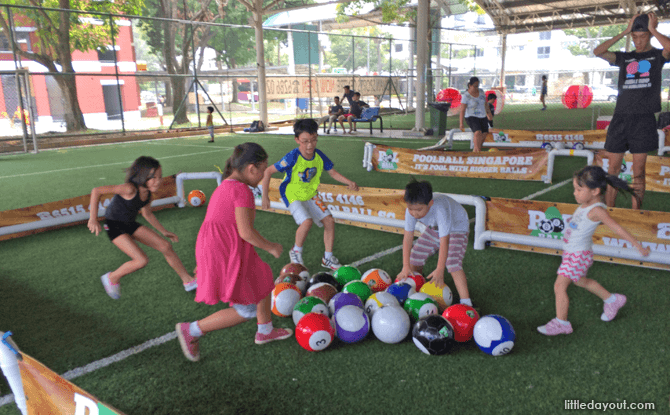 In between Bubble Bump Soccer games, younger kids could climb into the bubble suits. Even though they could not don the suits, they had fun rolling around in them. 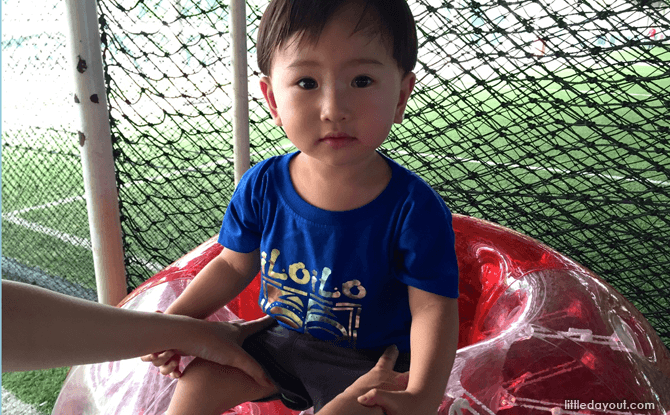 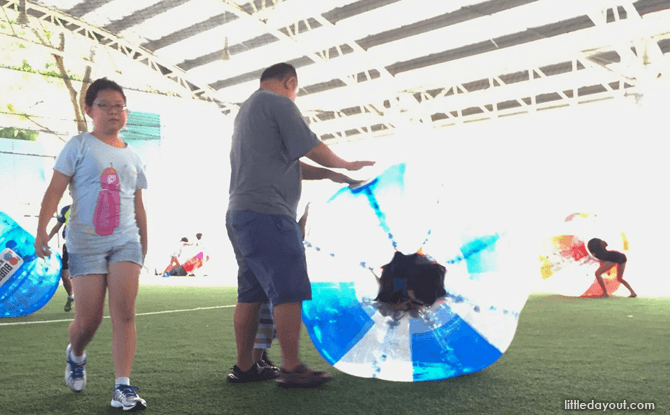 It was a free-and-easy, rollicking afternoon at Bubble Bump Little Day Out. Both kids and adults had silly fun together and it was a barrel of laughs for everyone.

A big THANK YOU to the folks from Bubble Bump Singapore for an enjoyable afternoon and a wonderful Little Day Out!