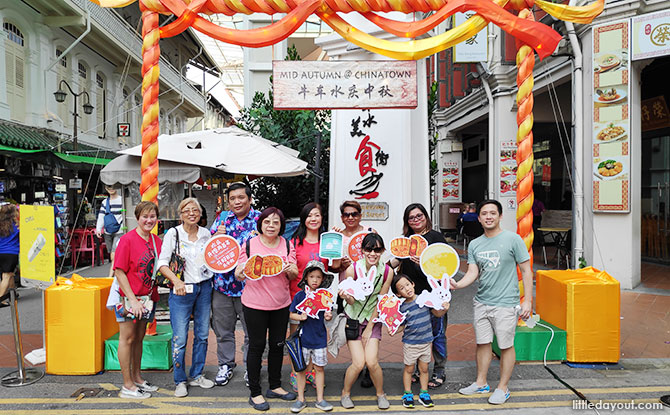 The Intriguing “Heritage” Part of the Chinatown Walking Tour 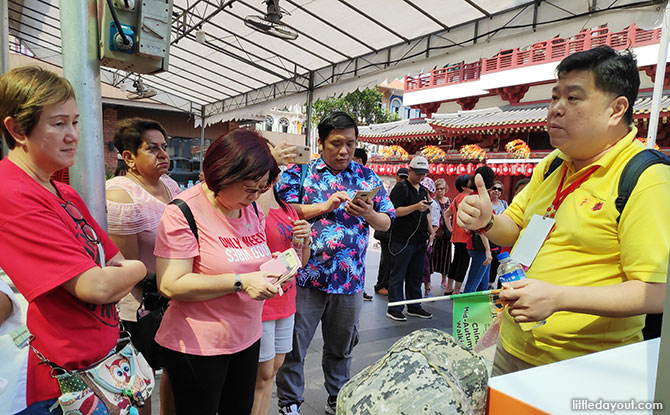 The Chinatown Heritage & Food Trail is run by volunteers who have years of guiding experience. Our guide Min Hoon is a secondary school teacher who frequently brings tourists and his own students on Chinatown walking tours.

He spoke candidly of the four evils Chinatown used to be associated. He also earnestly shared the transformation of Chinatown to a tourist spot with rich historical and cultural backgrounds that few might have known.

The Chinatown Heritage & Food Trail began at Kreta Ayer Square. It was bustling with activity – from the men busy at the Chinese Chess corner, to the songbirds with their microphones, to the dozens of tourists keen to experience a slice of Mid-Autumn cheer.

We walked down Sago Lane which got its name from the many sago factories in mid-1800s. But did you know Sago Lane was known as “Death Valley Street”, as it was home to death houses where bodies transported down the streets and last rites were held.

Then, we adjourned to Chinatown Food Street also known as Smith Street, which used to be a red-light district. 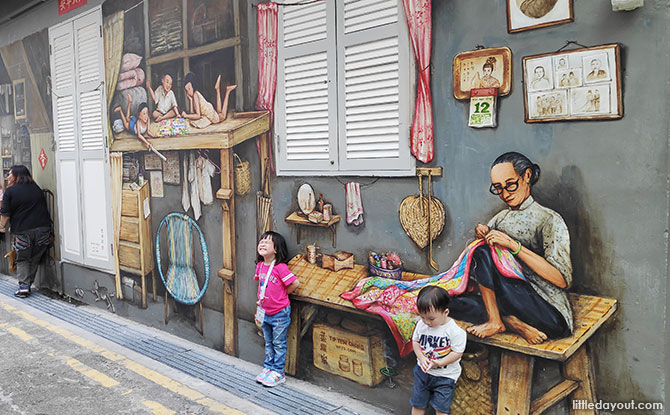 Spot the colourful murals of Yip Yew Chong down this street including “My Chinatown Home” and “Detective Conan in Chinatown”. In “My Chinatown Home”, Min Hoon pointed how cramped and narrow the living quarters were compared to the luxury of space now. I hope this taught the young children to be appreciative of what they have now. I really like how the murals enlivened the alleys and make great photo spots (and become conversation pieces) for all.

Did you know that Chinatown is still home to many “secret” societies, and I don’t mean the unsavoury sort? Xin Sheng Poets’ Society, Ping Chinese Opera Society, Singapore Association of Writers are amongst those we spotted at Smith Street while on the Chinatown walking tour.

Enjoying Chinatown’s Mid-Autumn décor – THE Highlight for the Children 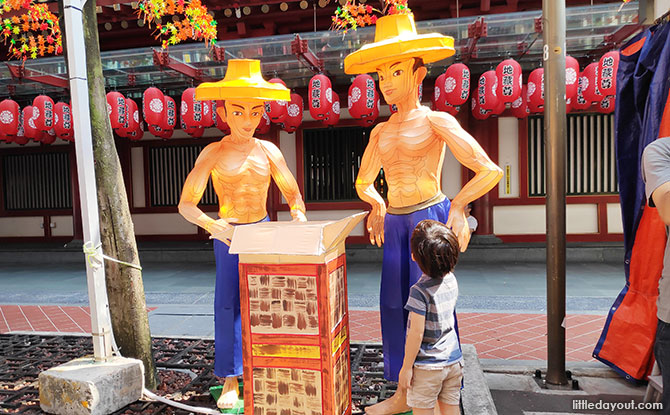 This year, the Chinatown Mid-Autumn decoration surrounds three main figures central to the history of Chinatown: Coolies, Samsui women and Chinese Opera singer. Designed by NAFA students and handmade by artisans in China, the light installations of these figures are dispersed throughout Chinatown. 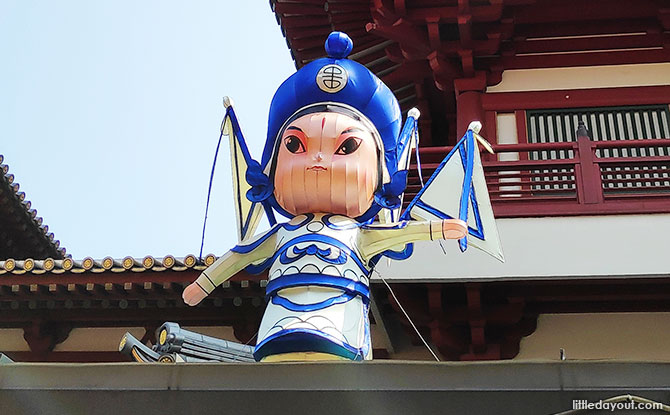 The boys had fun spotting the different Chinese Opera characters and Min Hoon cheerily explained their roles in a typical Chinese Opera scene. These characters are another poignant reminder of how hard our pioneers have worked to bring their descendants better lives.

Tummies rumbling? Time for some Heritage Food of Chinatown! 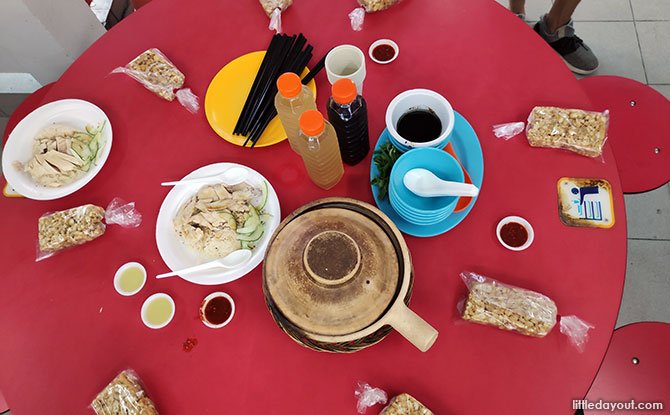 Finally, the moment everyone has been waiting for has arrived. The final destination of the trail was Chinatown Complex Food Centre. Hooray! Delicacies awaiting us were from different stalls currently housed at Chinatown Complex, some of which were pushcarts decades ago.

Min Hoon took us on a tour around the food centre, perhaps to show us the number of people in the queue we were about to skip. Just kidding, dishes were already pre-ordered in advance. 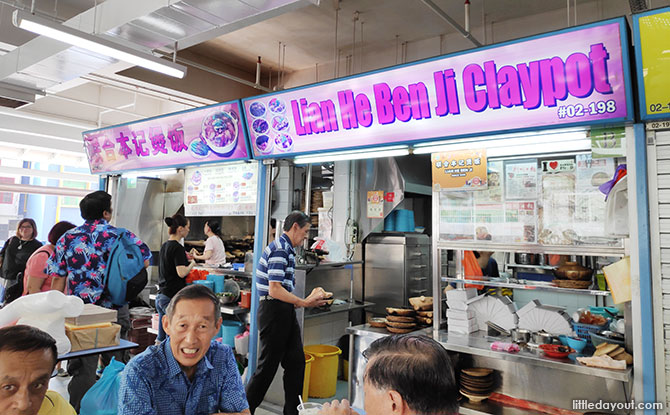 Stalls, such as Lian He Ben Ji Claypot, have been around since 1949! It is a privilege to be able to taste good food without queue-ing. If you would like to do a tour on your own, simply head to the food centre and look for the orange sign which indicates that the stall is a heritage brand.

Time to tuck in! Aside from shared portions of Hainanese chicken rice, claypot rice, sesame/peanut paste, zichar-style vegetables and sweet and sour pork, each participant of the Chinatown Heritage & Food Trail was given a full portion of fishball noodles, chee cheong fun and handmade Sar Kay Mah (Sachima)! 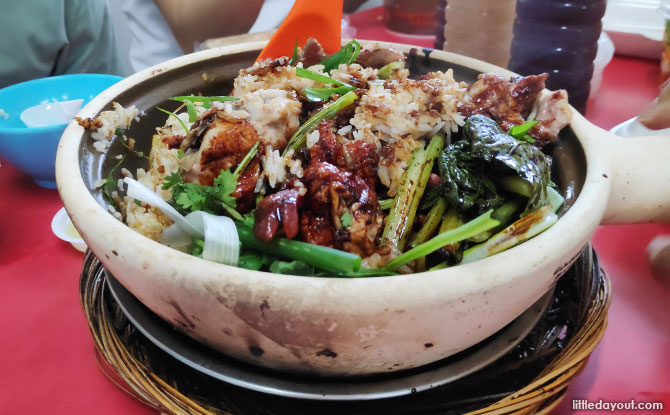 Seeing everyone delightfully savouring the tried-and-tested recipes, it was clear that the hawkers have retained the high quality over the decades. My favourite dishes were the claypot rice which was immensely fragrant, soft and silky chee cheong fun and peanut paste.

For parents bringing young children, I would highly recommend that children share the adults’ portion if they are not big eaters, to reduce food wastage.  Otherwise, bring your own reusable containers to takeaway leftovers.

We ended the Chinatown Heritage & Food Trail walking away with happy bellies and more historical insights about Singapore’s Chinatown.

The last run of the trail this year is on 8 September, from 3 pm to 5 pm! Sign up at the booth located at Kreta Ayer Square. It costs $10 per person. There will also be a mass lantern walk around Chinatown in the evening, a party at the open stage in front of Lucky Chinatown which will end in a bang with a grand finale of fireworks.