It’s summer, let’s shell-abrate! As some of us enjoy the summer holidays while others just try to survive the scorching heat, stay cool with some of these summer jokes that you can tell your family and friends. 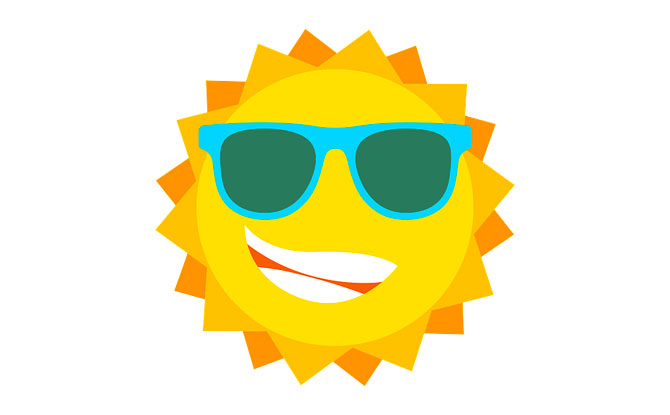 1. What’s the most mathematical aspect of summer?
The tan lines

2. Why didn’t summer didn’t have any friends
because she wasn’t cool enough

3. What do sheep like to do in the summer?
Have a baa-baa-cue!

4. What pet makes the best company for a hot summer day?
The chin-chiller

5. Why was the hipster wearing a scarf during the summer?
He liked wearing scarves before it got cool.

6. What did the pig say at the beach on a hot summer’s day?
I’m bacon!

7. Why did the summer school teacher wear sunglasses?
Because her class was so bright.

8. Why did detectives show up at the concert at the beach?
Because something fishy was going on!

9. How can you tell the difference between spring rolls and summer rolls?
By their seasoning.

12. Who changes the season when Summer is over?
No one, it happens Autumnatically.

13. Why did the robot go on summer vacation?
He needed to recharge his batteries.

14. What’s a hipsters favourite season?
Summer, they like it before it’s cool

15. What do you call a Frenchman wearing summer beach sandals?
Phillipe Phloppe.

16. How does Rapunzel keep cool in the summer?
She uses her hAIR conditioner.

17. What happens when you throw a green rock into the Red Sea during summer?
It gets wet

18. Why don’t oysters share their pearls?
Because they’re shellfish!

20. Why did Humpty Dumpty have a great fall?
To make up for his miserable summer.

21. Why was it so hot in the stadium after the baseball game?
All the fans left.

22. Why didn’t the sun go to college?
He already had a million degrees.

23. What do you call a mathematician who spends all summer in the sun?
A tangent.

24. What’s black and white and red all over?
A zebra with a sunburn!

25. Why did the cheerleader put extra salt on her food in the summer?
She wanted to do summer salts.

26. Why do bananas use sunscreen?
They peel when they get a sunburn.

27. Why did the newspaper talk to the ice cream?
It was looking for the scoop!

28. Where do sharks go on summer vacation?
Finland!

29. What did the air conditioning unit say to its owner?
I’m your biggest fan.

30. What did the beach say to the tide when it came in?
Long time, no sea.

32. How do you prevent a Summer cold?
Catch it in the Winter

33. How do teddy bears keep their den cool in summer?
They use bear conditioning

35. What’s brown, hairy and wears sunglasses?
A coconut on vacation!

36. What do you call six weeks of rain in Scotland?
Summer!

37. What does the sun drink out of?
Sunglasses

38. What do you call someone who likes to add numbers when the weather is warm?
A summer

39. Why do owls prefer summer over autumn?
Because it’s too wet to woo!

40. What do snowmen do in summer?
Chillout

41. What is the difference between a piano and a fish?
You can tune a piano, but you can’t tuna fish.

42. Why didn’t the elephant buy a suitcase for his summer vacation?
Because he already had a trunk!

43. What is grey has four legs and a trunk?
A mouse going on holiday!

44. How do we know that the ocean is friendly?
It waves!

45. What do whales like to put on their toast?
Jellyfish

46. What do you get when you combine an elephant with a fish?
Swimming trunks

47. What do you call seagulls that live near the bay?
Bagels!

48. What do ghosts like to eat in the summer?
I Scream.

49. Where do you learn how to make ice cream?
At sundae school

50. What do you call a witch on a beach?
A sandwitch

51. Why is the beach a great place to go in the summer
We all need some Vitamin-sea

53. What should a toddler wear to go swimming?
Pool-ups.

54. What summer vacation spot allows you to bring pet birds?
The Canary Islands

55. Where do cows go on their summer holiday?
Moo York!

56. Why did the shark befriend the dolphin?
Because it wanted more porpoise in its life

57. Why did the teacher wear sunglasses to summer school?
Because her students were so bright

58. What kind of sandwiches can you make at the beach?
Peanut butter and jellyfish sandwiches.

59. Which is the most desired summer body this year?
The antibody.

Summer Jokes To Tell Your Family And Friends

Summer is a great time to spend with family and friends. It’s time to Seas the day! Be it time at the beach, at the sea, or even indoors with the air conditioning on blast, there’s always time for some great jokes. Here are some great summer jokes to enjoy.

60. Everyone seems to think my jokes about spring, summer, and fall are awful.
Oh well. I guess they can’t all be winters.

61. My friend went for a job interview at a sun cream factory but didn’t get it.
He’s going to reapply.

62. My wife and I just had a daughter and named her JuneJulyAugust.
We call her Summer for short.

63. First woman: My son came to visit for summer vacation.
Second woman: How nice! Did you meet him at the airport?
First woman: Oh, no. I’ve known him for years!

65. Knock, knock
Who’s there?
Fire
Fire who?
Fire you I’d put on some more sun cream!

66. Knock, knock
Who’s there?
Don!
Don who?
Don you want to go to the beach and check out the waves?

67. I always get burnt during summer time. I would go under trees but they’re a little shady.

68. Last summer I rode a dolphin on accident. Usually, it’s on porpoise

69. Everyone during the summer tries to make sure they have an air conditioner. But no one has any air shampoo

71. My son was playing a Zelda game and I told him it was more effective to lose health during the summer and winter seasons. Confused, he asked why?
I said, that way you don’t take any Fall damage.

72. On a summer’s day, two American tourists were driving through Wales. At the beautiful village of Llanfairpwllgwyngyllgogerychwyrndrobwyllllantysiliogogoch,
they stopped for lunch, and one of the tourists asked the blonde waitress,
”Before we order, I wonder if you could settle an argument for us. Can you pronounce where we are, very, very, very slowly”. The girl leaned over and said: – ”Burrr ……..gurr …….king”

73. My wife told me she and her sister started a weight loss competition to see who can shed the most pounds before their cousin’s wedding this summer. “I hope you win” was not the correct response.

74. A young couple are trying to save money on their summer vacation.
They bring their bags to the discount airline desk to check in. “Do you have reservations?” asks the woman behind the counter. “More than a few,” the young man answered, “but we’re flying with you guys anyway.”

75. I told my boss that I had a terrible fall.
He said, “That’s fine, don’t come in to work today.” Next time, I’ll tell him I had a horrible summer, too.

77. How’s y’all’s summer bods looking?
Mines looking like I have a great personality.

78. A teenager, wanting to earn some extra money for the summer, decided to hire himself as a handyman and started canvassing a nearby well-to-do neighbourhood.
He went to the front door of the first house and asked the owner if he had any odd jobs for him to do.
“Well, I guess I could use somebody to paint the porch” he said. “How much will you charge me?”
Delighted, the teen quickly responded, “How about $50?”
The man agreed and told him that the paint and brushes and everything he would need were in the garage.

The man’s wife, hearing the conversation, said to her husband, “Does
he realize that our porch goes ALL the way around the house?”

“That’s a bit cynical, isn’t it?” he responded.

A few hours later the teen came to the door to collect his money.

“Yes,” the teen replied, “and I even had paint left over so I gave it two
coats.”

Impressed, the man reached into his pocket for the $50 and handed it to him along with a $10 tip.

79. A guy was watching TV as his wife was out cutting the grass during the hot summer afternoon. He finally worked up the energy to go out and ask his wife what was for dinner.

The wife was quite irritated about him sitting in the air conditioned house all day while she did all the work, so she scolded him. “I can’t believe you’re asking me about dinner right now! Imagine I’m out of town, go inside and figure dinner out for yourself.”

So he went back in the house and fixed himself a big steak, with potatoes, garlic bread and a tall glass of iced tea. The wife finally walked in about the time he was finishing up and asked him, “You fixed something to eat? So where’s mine??”

“Huh? I thought you were out of town.”

The officer, “I’m here to inspect your property for illegally grown drugs.” The old gentleman says, “Well, you go right ahead, but whatever you do, don’t go into that field over yonder,” pointing out a fenced parcel of land.

The officer, “Mister, I’m a law enforcement officer authorized by the federal government of our nation.” Reaching into his pocket, he removes his badge and shoves it right in the old boy’s face,“You see my badge, buddy? This badge means that I’m allowed to go wherever I wish, anytime I wish. Do you understand me? No questions asked.” The old gentleman nodded his head yes politely, softly apologized, and went about his chores.

A short time later, the old gentleman heard someone screaming in absolute terror – coming from where he’d told the officer not to go. He looked over at the pasture and saw the officer running for his life, chased by a very angry bull. With every step the bull was gaining ground on the officer, and it appeared likely that the policeman would be gored by the bull’s horns before he could reach safety.

Realizing the horrible danger that the policeman was in, the old gentleman ran to the field’s fence as fast as he could, determined to do whatever he could to help. Reaching the edge of the pasture, the old gentleman quickly climbed to the top of the fence, waving his arms frantically and screamed at the very top of his voice, “Your badge, officer, show him your BADGE!”

81. A Rabbi and a Priest were having a picnic on a really hot summer day and wanted to dip in the river to cool off. They had not thought to bring bathing suits, so decided to skinny dip instead.

The river was flowing rapidly and both clergies were washed a short distance downstream before getting out. After climbing out of the river they had just started to make a run for it to get to their clothes when many members of their congregation came into view.

The Priest covered his privates with his hands and put on a burst of speed, but the Rabbi covered his face instead. “What are you doing?” the Priest asked. “I don’t know about you,” the Rabbi answered, “but my congregants recognize me by my face.”