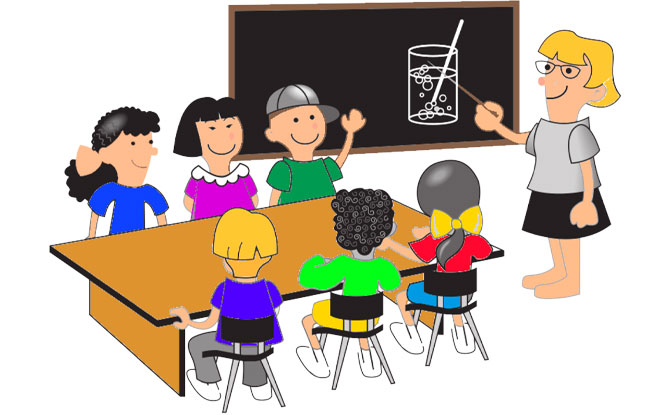 Ahh, school. The place many of us spent hours at growing up. Although there can be dreary periods along the way, here are 80+ jokes about school that you can laugh at in between breaks and when the school bell rings.

80+ School Jokes That Are Top Of The Class 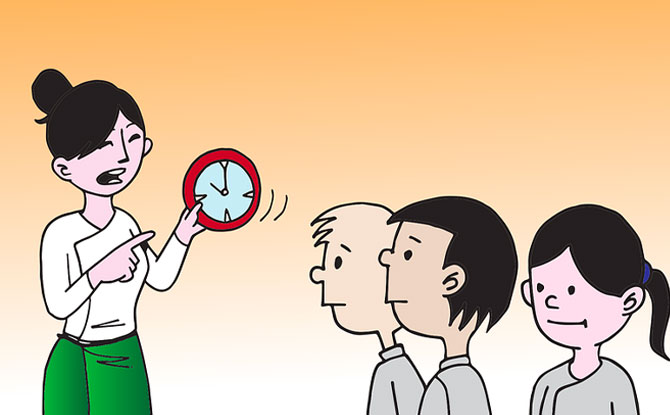 1. Why did the student throw her watch out of the school window?
She wanted to see time fly.

2. Name the dinosaur that has the best vocabulary.
The thesaurus

3. Which school does an ice cream man go to?
Sundae school

4. Why does the music teacher need a ladder in the school?
To reach higher notes

5. Name the flying mammal in the kindergarten class.
Alphabat

6. Why is history a sweet subject?
Because it has many dates

7. Why is the teacher wearing sunglasses in the class?
Because she has bright students in her class

8. Who is the leader of the school supplies?
The ruler

9. Why are the dark ages named so?
Because they have many knights

10. Which school do the birds go to?
High school

11. Why do music teachers do well in a baseball game?
Because they have a perfect pitch

12. Which is the shortest month of the year?
May, because it has only three letters

13. Which is the tallest school building?
The library. It has many stories

14. Why does a dog do so well in school?
Because it’s the teacher’s pet

15. Why do magicians score well in exams?
Because they can handle tricky questions

16. Why didn’t the Sun go to any university?
Because it already has many degrees

17. What is a superhero in a computer class.
The screen saver

18. What did the paper say to the pen?
You have a good point

19. Which tree is the math teacher’s favourite?
Geometree

20. When do student astronauts eat?
During launch time

21. Why does the math class make students sad?
Because it is full of problems

22. What is black when it’s clean and white when it’s dirty?
The blackboard

23. What is the blackboard’s favourite drink?
Hot chalk-olate

24. What is the favourite subject of a witch?
English, because it has Spell-ings

25. A school bus that you can never enter
The syllabus

26. What’s the best place to grow flowers in a school.
Kinder-garden

27. What is a tired school supply
A knapsack

28. Why do fireflies get bad grades at school?
Because they are not bright enough

29. A room that a student can never enter
A mushroom

30. How do you know that Saturn was married more than once?
Because it has many rings

32. Who is everyone’s best friend at school?
The princiPAL

33. How do bees go to school?
By school buzz

34. Which letter is hidden in a cup?
The letter T

35. Which school do the surfers go to?
The Boarding school

37. Why do geography students drown?
When their grades are below C-level

38. The longest word in the dictionary
Rubber Band, because it stretches

39. Why is beer never served at a math party?
Because you should never drink and derive

40. Why was the echo detained at school?
Because it replied every single time

41. What is a snake’s favourite subject?
Hiss-tory

42. What do elves do after school?
Gnome work

43. What is a boy in a class with a dictionary in his pants called?
Smartie pants

44. Why was the lesson written on the window?
To make it clear for the students

45. Where do giraffes go to study?
High school

46. Why is the letter A most like a flower?
Because a ‘Bee’ always follows it.

47. Who is the leader of the school supplies?
The ruler

49. Why are fish considered the smartest?
Because they live in schools

50. What can children catch but not throw?
A cold

51. Why is six afraid of seven?
Because seven ATE nine

52. Why were the students doing multiplication on the floor?
The teacher asked them not to use tables.

53. Why do the pirates take long to finish reading the letters of the alphabet?
Because they spend a lot of time at C

54. Who are the smartest letters of the alphabet
The Ys

55. How do you make seven an even number?
By removing the ‘S’

56. Which animal cheats in the exams?
The cheetah

57. Why can’t you trust atoms?
They make up everything.

58. Why was the clock called to the principal’s office?
For “tocking” too much

59. What US state has the most number of math teachers
Math-achusetts

60. How do math students take a sunbath?
By using SIN and COS to get tan

61. What do math students eat on Halloween?
The Pumpkin Pi

62. What did the computers eat during recess?
A small byte

63. Why do we measure a snake in inches?
Because it does not have feet

64. Which state is called the land of pencils?
Pennsylvania

65. What’s the calculator’s favourite statement?
“You can count on me.”

66. Which is the smartest insect?
The spelling bee

67. What did one pencil say to another on the first day of school?
You’re looking sharp.

68. When is it right for teachers to shout at something students don’t do.
When they don’t do their homework

69. What is a mathematical plant?
The one with square roots.

70. What did the cross-eyed teacher say to the principal?
I cannot control my pupils.

71. Why do the students wear glasses during math class?
To improve their di-vision

72. What does a spider do on the Internet?
Create a website

73. Which is the longest table in the class?
The multiplication table

74. What are the coolest letters of the alphabet
AC

75. Why is the obtuse angle always upset?
Because it can never be right

76. Why is a geometry lesson so adorable?
Because it has a lot of aCUTE angles

78. What is a bet that cannot be won
An alphabet

80. What do you call an English teacher addicted to Instagram
Insta-grammar

81. What is an English teacher’s favourite breakfast
Synonym rolls

82. Why do English teachers dislike parole
They like complete sentences.

83. Why did the period tell the comma to stop?
It was the end of the sentence.

84. Why do calculators make great friends?
You can always count on them.

85. Why was the clock in the cafeteria always late for class
It always went back four seconds.

86. What is the favourite tree of an English teacher
PoeTREE

87. Did you hear about the kidnapping at school?
It’s okay. The kid woke up. 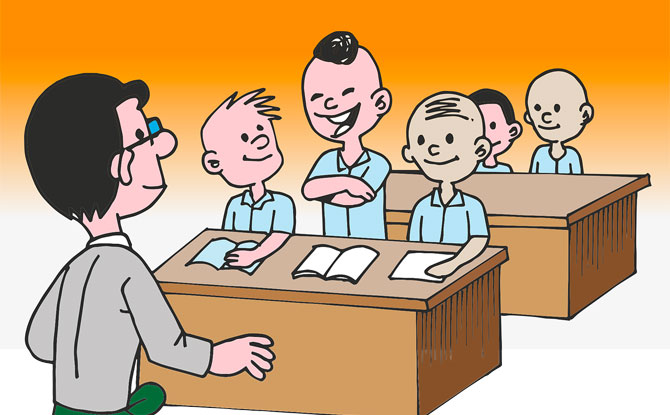 88. Teacher: What is one great thing that we have today but not ten years ago
Student: It’s me.

90. Teacher: Your essay on the cow is the same as your friends’. Did you copy their work?
Student: No, teacher. It’s about the same cow.

91. Teacher: What’s the longest sentence you can think of?
Student: Life imprisonment

92. At the start of the exam, the invigilator says, “You have exactly 2 hours. I will not accept any papers after this time has elapsed.”
Two hours later, the invigilator calls out, “Time’s up, Ladies and Gentlemen.”
One student is still scribbling away ten minutes later when the invigilator has all the collected papers in a large stack front of him. Slowly, the student finishes up and walks over to hand in his paper, but the invigilator refuses to accept it. The student puffs up his chest and says:
“Do you have any idea who I am?”
“No,” says the invigilator.
“Great,” says the student as he slips his paper into the middle of the stack and runs away

94. One day at school, a student needed to go to the restroom so he raised his hand. The strict substitute teacher asked him to say the full alphabet before she would let him go. “But Miss, I am bursting to go,” said the student. “You may go, but after you say the full alphabet.” “A-B-C-D-E-F-G-H-I-J-K-L-M-N-O-Q-R-S-T-U-V-W-X-Y-Z,” he said. Catching his mistake, the substitute asked, “Wrong, where is the ‘P?'” He answered, “Halfway down my legs, Miss.”

If you enjoyed this, check out these jokes about exercising and jokes for kids.