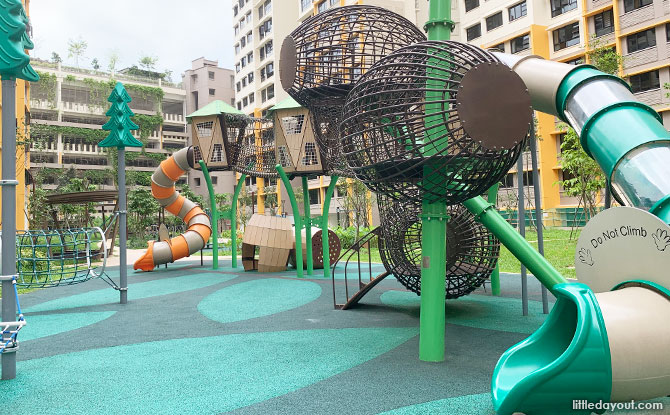 West Plains @ Bukit Batok is one of many “West _” estates in Bukit Batok, which include West Rock, West Terra and the list goes on. After spending some time visiting the many “Wests”, we found the West Plains playground to be the best. However, we also highlight of the other play spots around the Hong Kah North neighbourhood where kids and families can have some fun. West Plains @ Bukit Batok is located next to Le Quest shopping mall. Amongst the various housing apartment blocks, the West Plains playground consists of two play sections – one with high elements and another with lower play equipment. Towering in the air are three brown huts with green roofs, interconnected by a series of rope bridges. This West Plains playground offers barrels of fun for kids – literally. In addition to the tower playground, there are two brown faux-wooden barrels which kids can climb into. 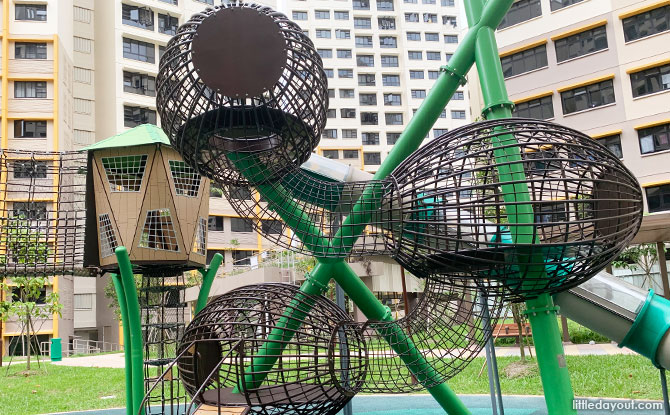 There is also tall play structure is shaped like a set of barrels, along with other rope play element at the West Plains playground. Younger children are not forgotten either. The section of the playground with lower play elements include slides, swings and a conical-shaped rope merry-go-round. Amazingly, there is more to look forward to at West Plains. A second playground, with slides and more climbing structures is currently in the works. It looks like the playground at West Plains @ Bukit Batok will just be plain fun! 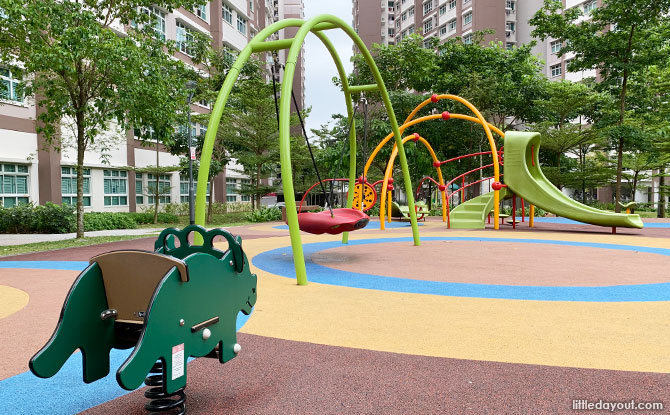 Around the Hong Kah North neighbourhood, another notable play spot is the playground at West Terra @ Bukit Batok. This neighbourhood playground features some interesting play features like a red two-person swing, suspended on a green frame. In another section of the West Terra playground, a blue seated merry-go-round can accommodate up to five kids at a time! 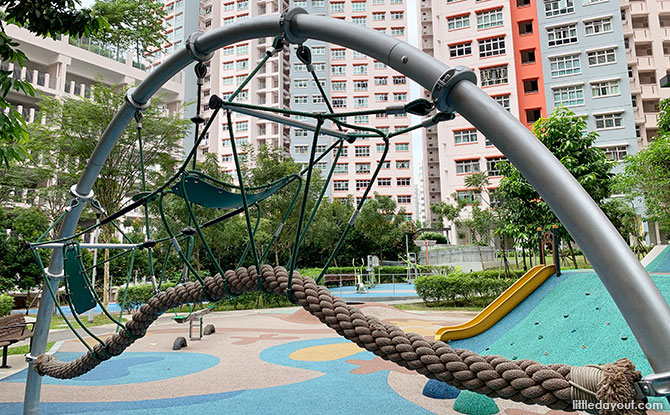 Another pocket of play can be found at West Valley @ Bukit Batok. This playground has a rope climbing frame, slope with handholds, slide and an “old-school-ish” see saw. The see saw even has rubber tires at the base – just like the good ole days! Nearby is a house-shaped play area. 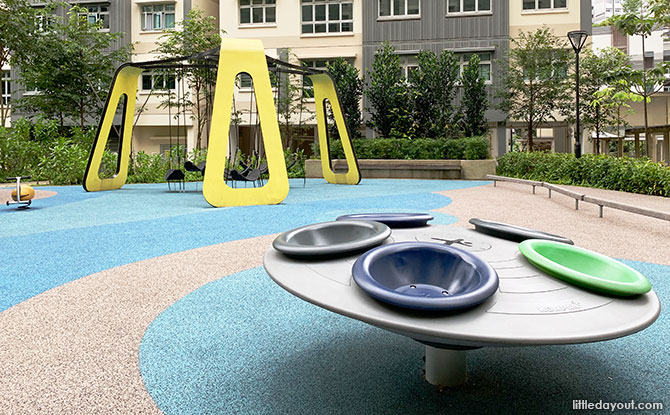 West Rock @ Bukit Batok hides a little play nook. A set of hammocks hang suspended from a yellow frame. It also has a bucket merry-go-round too! Nex to West Rock @ Bukit Batok is the West Quarry playground. This has a climbing dome along with slides and a see saw. Younger children can pay a visit to another play spot nearby. 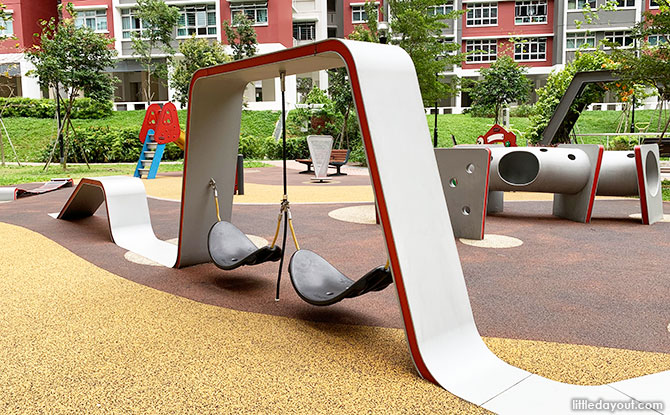 At West Edge @ Bukit Batok, toddlers can enjoy ribbon-shaped sets of play equipment which include low hammock swings and tunnels to crawl through. 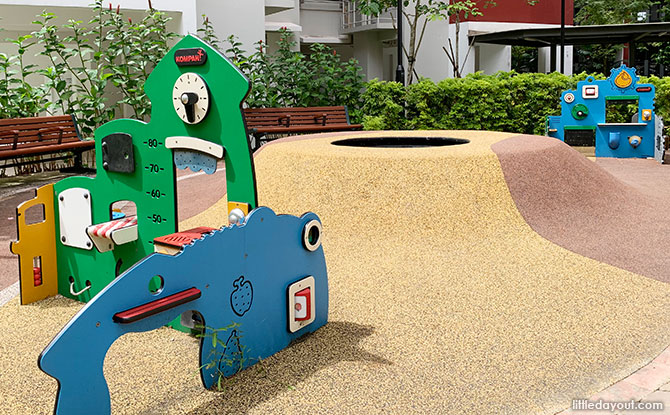 A small play spot with a trampoline is also hidden nearby. 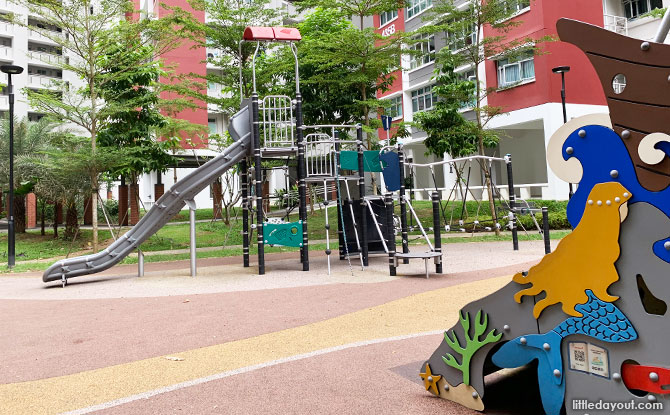 A more traditional playground for older children is also located a distance away. 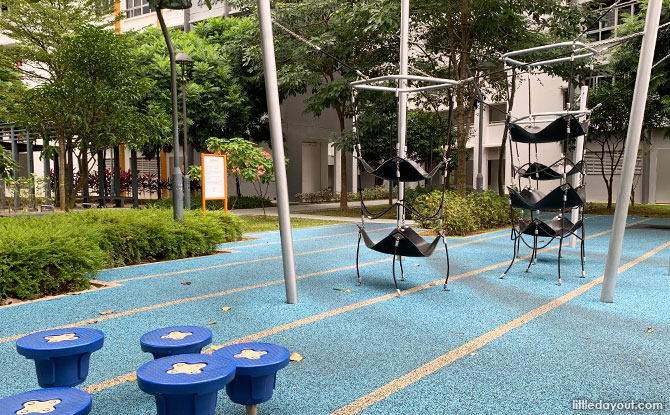 West Crest @ Bukit Batok, at the corner of Bukit Batok West Avenue 3 and Bukit Batok Road, has a play area which is made up a collection of hammocks. There is also a toddler play spot nearby. A last point about the Hong Kah North estate – there are plenty of roof gardens to explore, located above the multi-storey car parks. Not only do they offer some green relief in the sky, but you may also come across some hidden play spots too!

READ: The Best HDB Playgrounds to be Found in Singapore