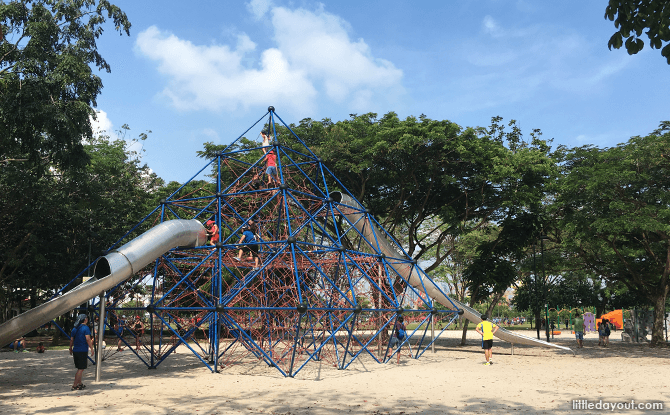 Playgrounds are the great, big fun. And, if you are looking for a super-duper park playground in Singapore, they don’t come much bigger or better than the West Coast Park Playground.

The West Coast Park Playground is really made up of six different playgrounds, filled with equipment suitable for children as young as two years old. It has something for every child and is perfectly located at the lush greenery of West Coast Park. 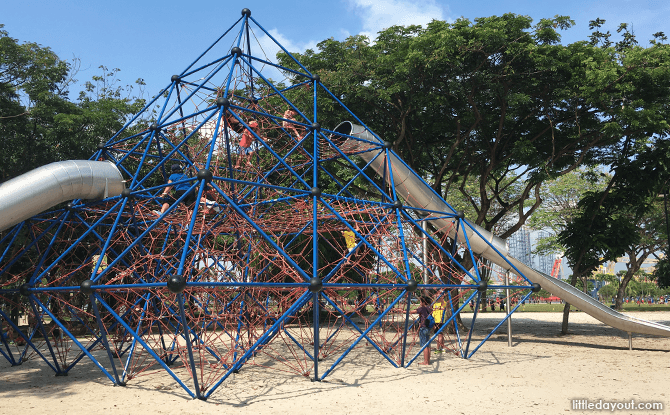 The towering climbing pyramid is an iconic feature of the West Coast Park Playground. Its red ropes are strung over a blue frame. Kids who make their way to the top are rewarded by a slide down to the sandy ground below. We’ve seen plenty of parents on the pyramid too, helping their kids navigate their way up the web of hexagonal spaces that make up the structure. 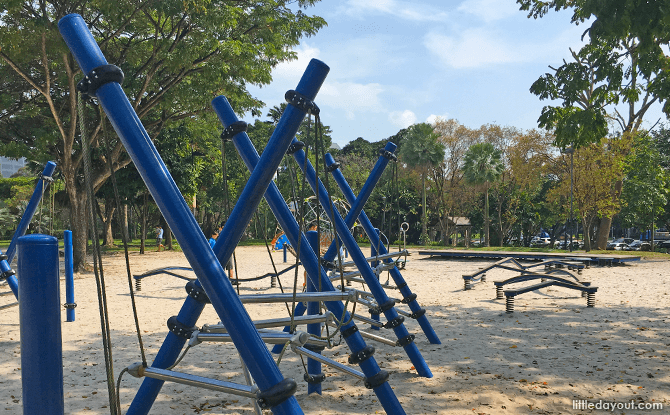 Next to the pyramid is a bridge with metal rungs. Kids can make their way across the structure before coming to a wooden balancing beam. With a mixture of steep and gentle gradients, kids can shuffle along the narrow width of the beam. 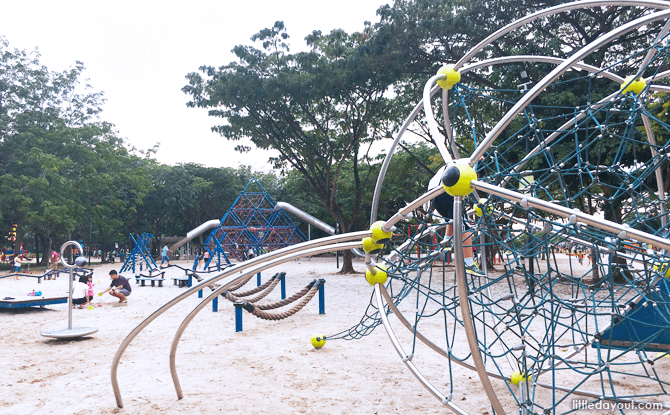 Kids can hop along round platforms which leads to a climbing sphere. This climbing sphere makes a good “training camp” for kids before they summit the pyramid. 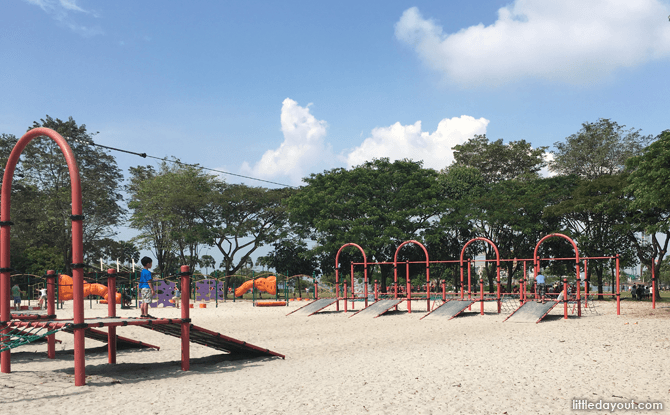 Beside the Pyramid play zone is the Zip Line play area. This is dominated by a row of four zip lines stretching out across the sandy playground. Kids can climb up a platform, jump onboard a seat and jet across the playground. There is also a green, yellow, purple and orange obstacle course here. It starts off with a set of yellow ladders, followed by rope netting, balancing log, more rope obstacles, tunnels and so on. Great fun for young kids. 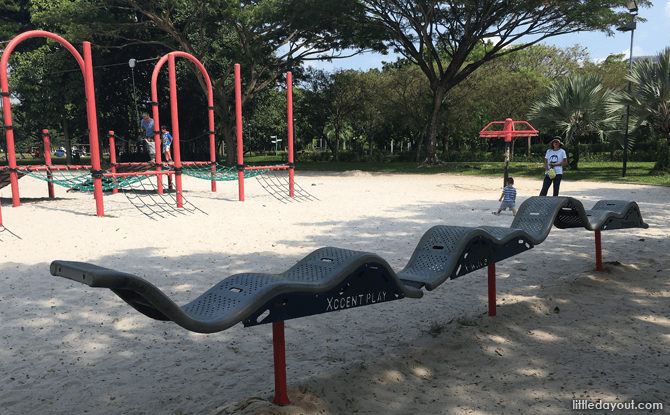 Other fun play equipment here include a wobbly bridge that kids can try walking across it, or just sit and bounce around, a “hang-on” merry-go-round and a disc swing. 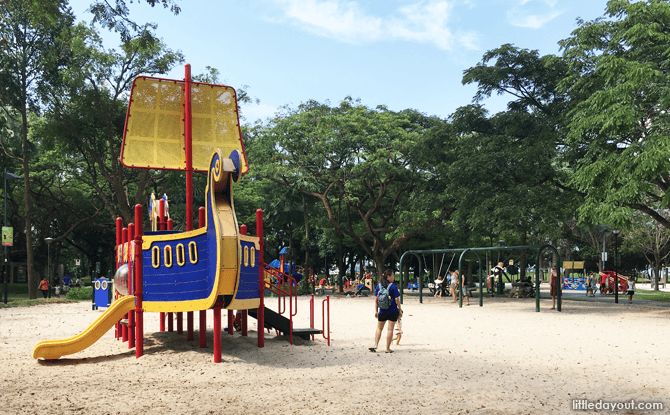 Dominated by a brightly coloured Viking Ship play structure, this play area is also where you find the swings. It is also a favourite spot for sand play because of a sand play structure where kids can dish in-and-out sand. Nearby, there is also a little maze for kids to wander through. Designed for kids as young as two, the toddler play area is a location to invoke their senses. There are panels where they can turn wheels, a red fire truck see-saw for them to play on and suggestions for a scavenger hunt. On a percussion wall, kids can bang away on the drums incorporated into the wall. 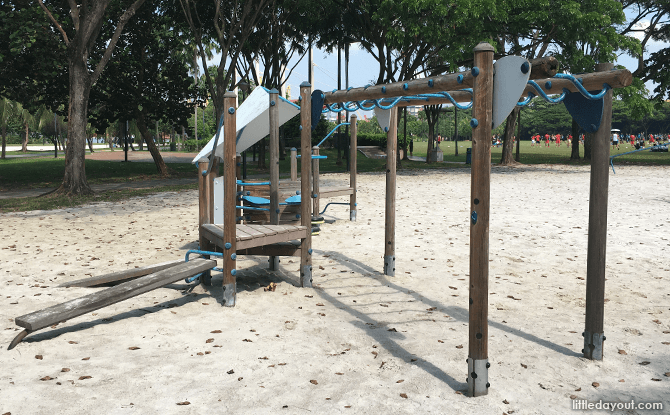 This Wooden Obstacle Course is a rather old-school area of West Coast Park Playground. With monkey bars, wooden platforms and ramps to climb around, it is the spot for some old-fashioned play time. This colourful playground is the only one at West Coast Park Playground, besides the Toddler Play Area, that does not have a sand pit. Instead, the ground is covered with soft foam. The play equipment here is designed to be accessible to wheelchairs. At this inclusive playground, ramps lead up to a rocking platform and the swings are broader to accommodate children of all abilities. Three blue slides fan out downwards from the playground which also features a little tower. 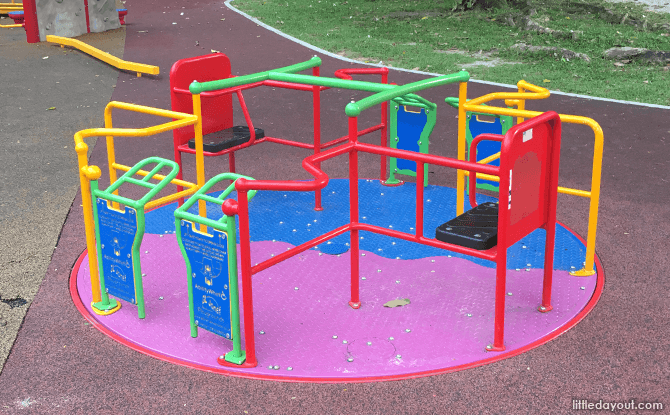 One of the interesting pieces of equipment at the playground is a merry-go-round that is set into the ground. This accommodates wheelchair users who wish to join in the fun as well.

And there you have it, West Coast Park Playground’s six different play areas!

From toddler spots to adventurous challenges, West Coast Park Playground is a perfect place for a fun-filled day as a family or for an awesome big group outing.

Getting to West Coast Park Playground

Those driving should park at West Coast Park Car Park 3.

READ: Aeroplane Themed Playground Takes Off at The Oval