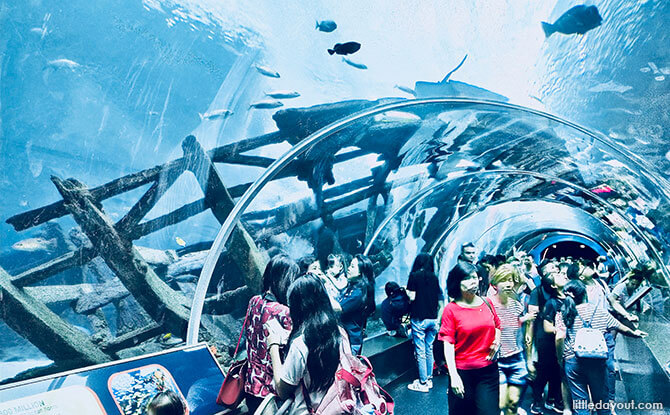 The S.E.A. (South East Asia) Aquarium located within Resorts World Sentosa is one of the largest aquariums in Southeast Asia. Home to more than 100,000 marine animals of over 1,000 species and over 50 different habitats – each one as fascinating as the next as we visited the S.E.A Aquarium with kids in tow.

Since it first opened in 2012, the S.E.A. Aquarium has undergone a few changes which includes a major revamp of the Maritime Experiential Museum. Now, you can choose to bypass the museum and head straight to the S.E.A. Aquarium – which is exactly what we did together with our children. 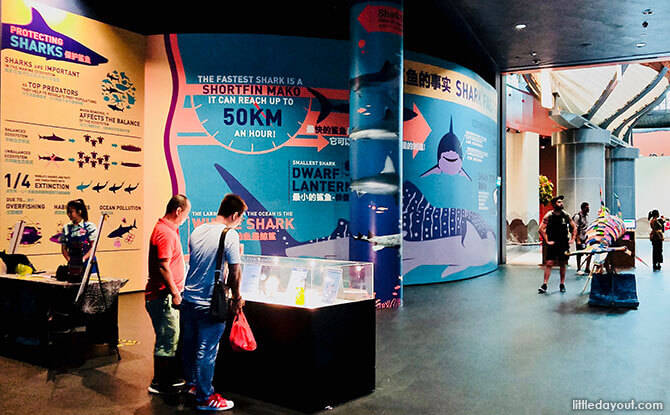 The marine life journey through the S.E.A. Aquarium starts at the Shark Seas Habitat. Before you walk through the tunnel, spend some time with your children in the adjoining exhibition area at the Shark Seas Habitat that showcases a plethora of shark-related information and exhibits. An on-going exhibition, this spacious area is filled from wall to wall with awe-inspiring facts, replicas and models about the majestic predators of the sea with whom you will soon come face-to-face.

In the Shark Seas tunnel, little ones and parents will have an undoubtedly great time spotting the various species of sharks, notably the endangered scalloped hammerhead shark, the silvertip shark, and the sandbar shark.

During peak periods, the tunnels can get unbearably squishy, unfortunately. We don’t all have the luxury of visiting the S.E.A. Aquarium with toddlers on a weekday, so when visiting, be mindful and tolerant! Take photos quickly so as not to hold things up in the tunnel, and if you’re with baby or toddler, consider babywearing for a more pleasant experience. 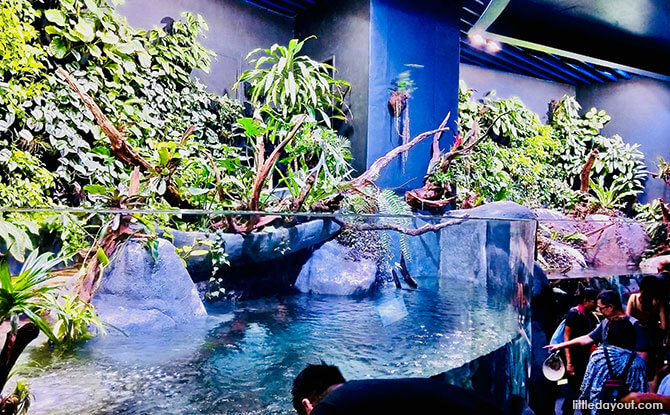 There is no fear of getting lost within the S.E.A. Aquarium as the design is such that visitors are encouraged to keep moving forward. If you do take a wrong turn so to speak, you’ll soon realise that you’re going in the “opposite direction” by observing the general flow of the crowd!

That said, keep a close eye on the children and watch your step as the S.E.A. Aquarium is dimly-lit – there are quite a few steps around and pram/wheelchair-friendly ramps. 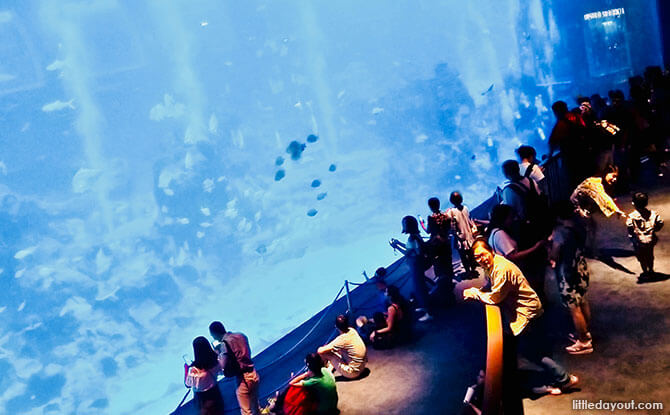 One of the highlights of the S.E.A. Aquarium is the Open Ocean Habitat.

Featuring one of the world’s largest acrylic panels at 36 metres wide and 8.3 metres tall, the Open Ocean Habitat offers a spectacular view of rare marine species, such as giant manta rays, and the goliath grouper.

If the children need a snack and a toilet break, take five here at the Open Ocean Habitat where you can indulge little ones in popcorn, candy floss, and some arts and crafts at the tables specially set up for them on the second level.

While the children are hard at work, parents can grab a drink and watch the marine life swimming languidly in the “ocean” – don’t be surprised to see divers as part of the PADI Open Water Diver course since the Open Ocean Habitat is certified as a full open water dive site because of its total size and water movement and volume! 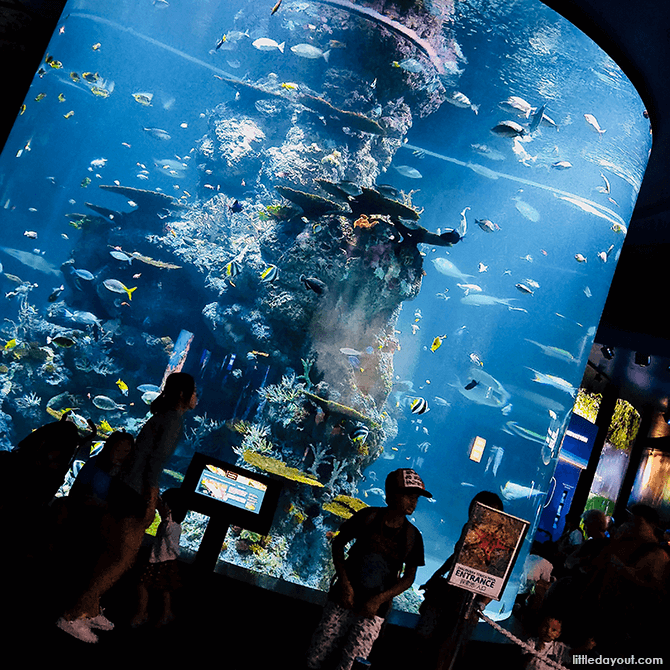 As you continue on your journey through the S.E.A. Aquarium with kids, you will enter the Straits of Malacca and Andaman Sea zones where both you and your child will be mesmerised by the colourful and graceful jellyfish.

Look out for marine species swimming beneath the sea (through) floor and for the opportunity to touch some marine life such as sea stars in the Discovery Touch Pool.

The last tunnel on your way out of the S.E.A. Aquarium takes you to the Strait of Karimata and Java Sea zone, home to the Shipwreck Habitat and large schools of Trevally and Batfish. If you’re eagle-eyed enough, you might catch a fish “wash” where small fish like the cleaner wrasse feed on their bigger peers’ skin and gills.

If you are looking for a fun place to bring the kids for a day out, pay a visit to S.E.A. Aquarium at Resorts World Singapore.

Put aside at least an hour to spend some time in the Aquarium and learn as much as you can about the different types of marine life. There is no better textbook than actually seeing the animals for yourself!