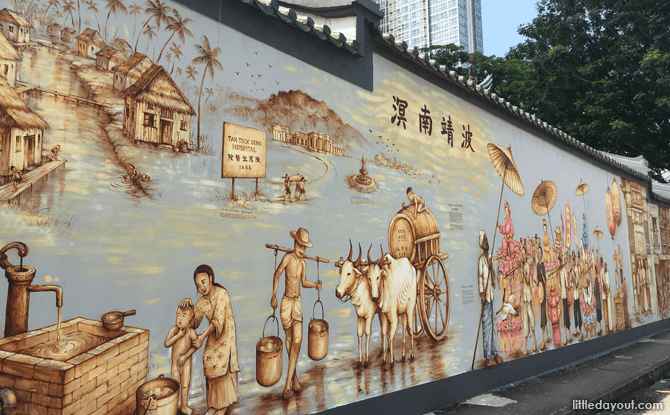 On the rear wall of a 177-year-old temple is a 40-metre long painting that tells the story of early Hokkien immigrants to Singapore. The Thian Hock Keng Mural beautifully illustrates the dreams and struggles of the early Hokkiens, the pain of leaving loved ones behind in search of a better life, and their contributions and sacrifices that have helped shape modern Singapore.

The Thian Hock Keng Mural is a moving work and befittingly found on the walls of one of the oldest and most important Hokkien temples in Singapore.

The Thian Hock Keng temple has its origins in a small joss house built by the Singapore waterfront around 1822. Here, immigrants who had safely made the sea journey from China to Singapore would give thanks to Mazu, a Chinese sea goddess, for their safe passage.

The current temple was constructed in 1840 with donations from the local community, including Tan Tock Seng, a prominent Hokkien businessman.

The new mural stretches across the temple’s rear exterior wall. 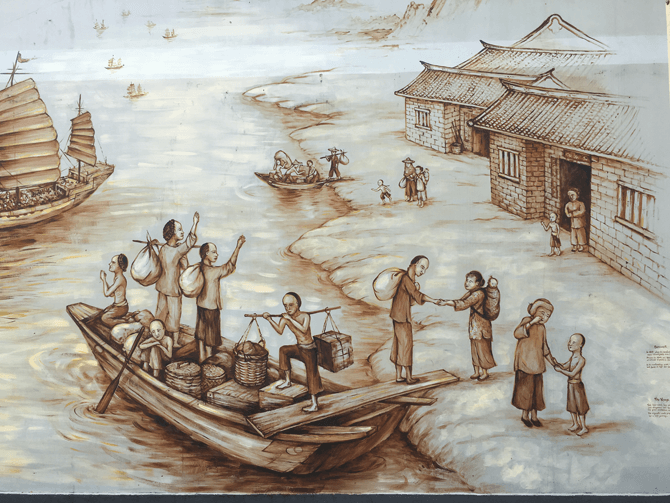 Starting from the right-hand side, the mural opens with poignant scenes of young men leaving their families behind. They then made the dangerous two-week sea journey from China to Singapore, knowing that they may never see their loved ones again. 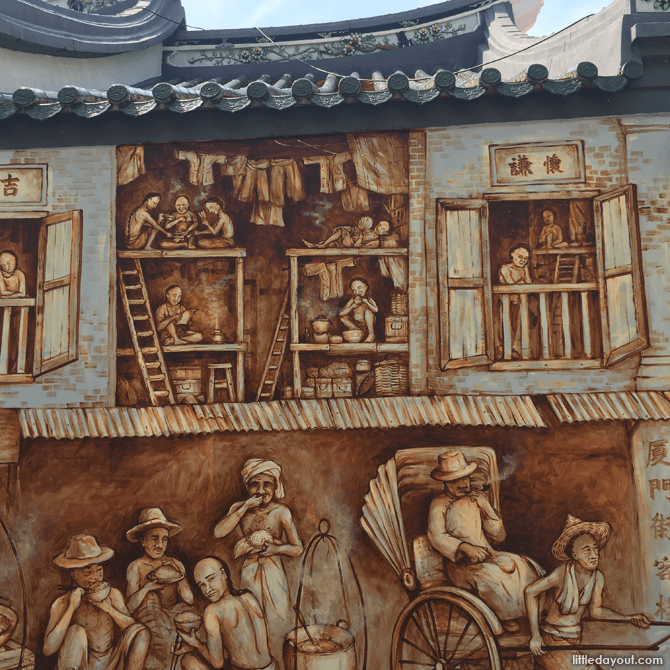 The next few sepia-coloured scenes depict the Telok Ayer Bay and the role of the Hokkien Clan Association in 19 Century Singapore. 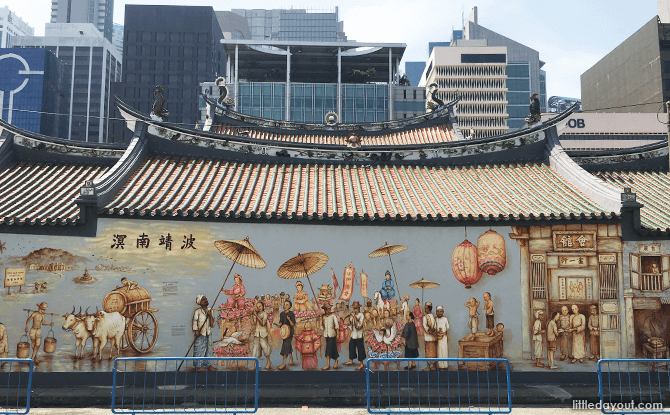 At the centre of the Thian Hock Keng Mural is a colourful depiction of the grand procession held in 1840 to welcome the arrival of the statue of Mazu, Goddess of the Sea. 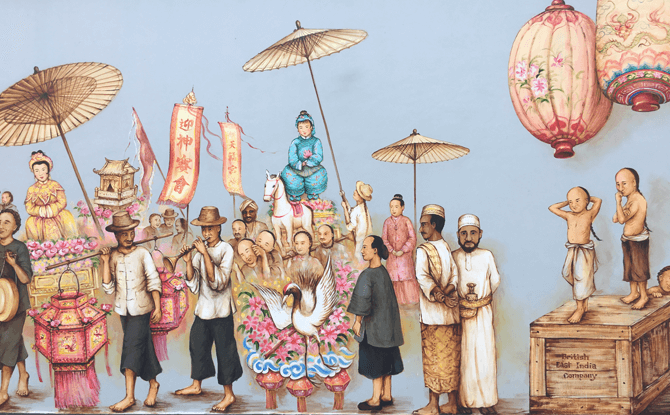 This procession was held every three years all the way up till 1935. 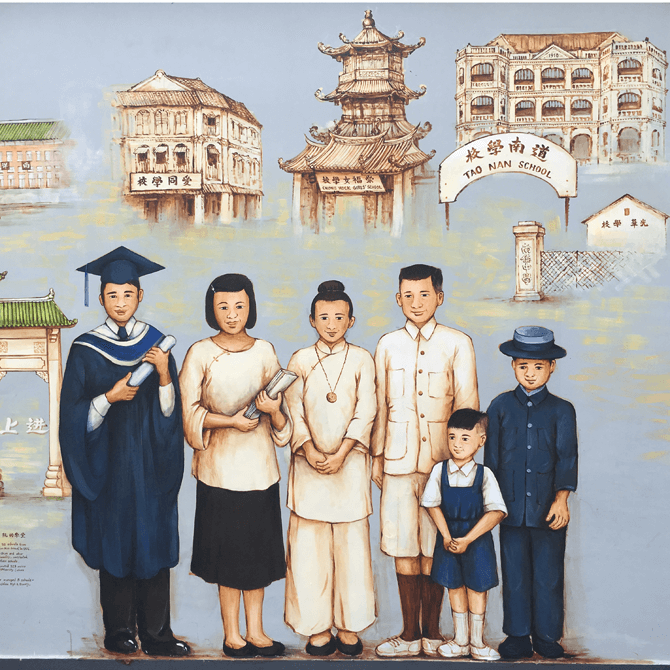 Recognising the importance of learning, a section of the mural is dedicated to education. It pays tribute to early pioneers such as Tan Kah Kee and Lee Kong Chian who made contributions to the establishment of schools in Singapore. 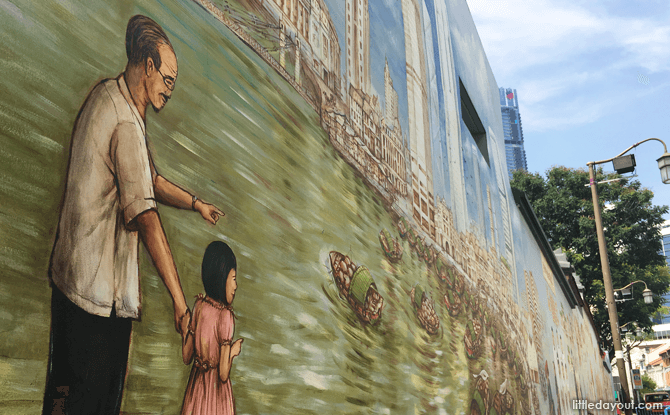 The last scene depicts the Singapore River. By the river bank, a grandfather stands with his young granddaughter. Together, they look back at two centuries worth of aspirations, sweat and tears that have made Singapore what it is today.

We think the Thian Hock Keng Mural is a masterwork that poetically tells the story of Singapore’s pioneers.

Hidden Secrets of the Wall Revealed Through Augmented Reality

You can simply admire the Thian Hock Keng Mural for what it is. However, the mural holds one more secret. 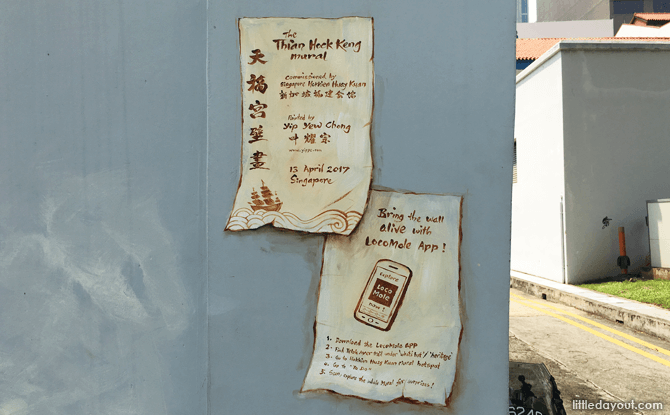 Showing how technology can be blended in with heritage sites, visitors can make use of an app, LocoMole, by Singapore company LDR Technology to view additional augmented reality content using the Thian Hock Keng Mural.

First, download LocoMole app and the Telok Ayer – Past and Present map. At the Hokkien Huay Kuan Mural point-of-interest, go to Things to Do and switch on the Augmented Reality mode. Next, scan the mural with the camera. 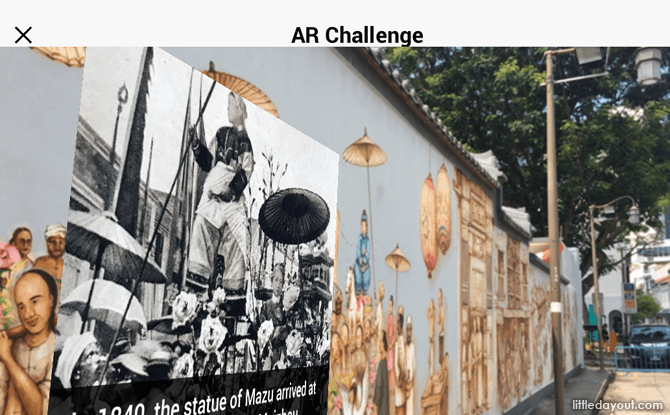 At selected points along the 40-metre long mural, additional content will come up on the app. 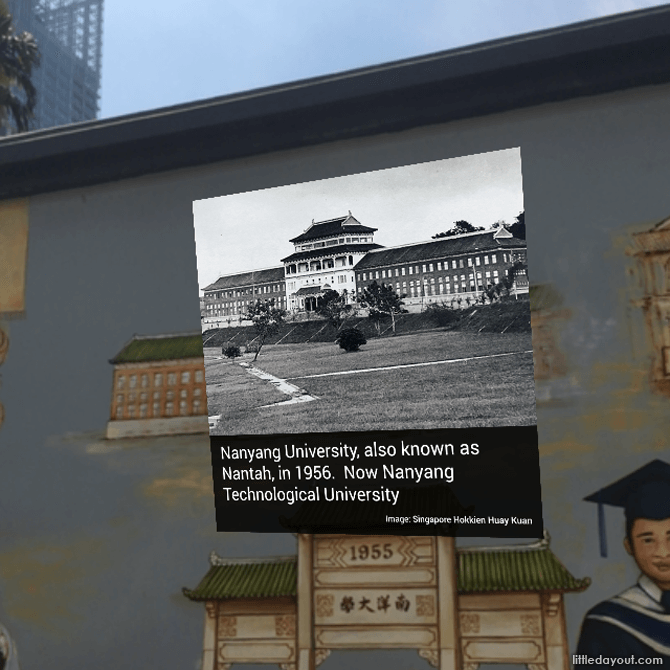 These include images and further descriptions of the scenes depicted on the mural.

The Thian Hock Keng Mural is a welcomed piece of art that we believe will be appreciated for years to come. The LocoMole AR app helps to augment a visit and, frankly, we were pretty impressed with the concept. Rather unexpectedly, the back wall of one of the oldest Chinese temples in Singapore has become a canvas that demonstrates how art and technology can come together for a purpose.