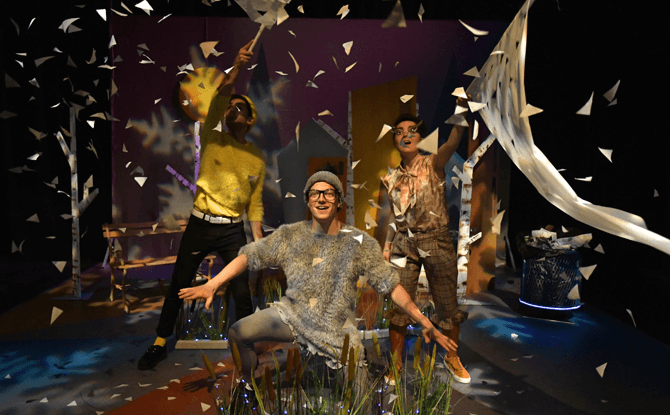 Follow the fluid flight of swans with their swirling feathers and enter the magical, yet modern, world of a fairy tale re-told through physical theatre.

The 2017 adaptation of Hans Christian Andersen’s The Ugly Duckling was scripted by Emma Reeves and directed by Wendy Harris. Jointly produced by tutti frutti and York Theatre Royal, it was brought into Singapore as part of KidsFest! 2018.

Ugly (Danny Childs) is gangly and grey. He stands out in contrast to his furry yellow siblings led by the head honcho brother duckling Fluffy (Daniel Nadaffy) who rejects and isolates him for looking and sounding different.

“It does not matter what you look like, it is what you do,” reassured the kind Mother Duck (Maeve Leahy). While loving advice, this frames Ugly’s search for peer acceptance, leading to a series of misguided albeit well-meant suggestions from other animals he befriends along the way.

Every different animal in The Ugly Duckling has a trademark personality-mannerism. From a fighting jabbing goose, an affectionate bouncy dog to a jazzy slouchy cat with an attitude. They try to teach Ugly to act and sound like them but his imitations fall short, similar to earlier attempts to fit in with his quaking, flappy siblings.

Forlorn, Ugly ends up squatting amidst the rushes, pondering on his fate and catching a glimpse of swans in flight, wishing he could soar like them in beauty and above the situation.

My girl loved the show’s feminine appeal – the fluttering Mummy Duck singing, the cute fawning Dog and the graceful flying Swans. My boy preferred the modern Swans with their dark shades and white suits, and the element of the surprise ending with a new sparkly blue egg about to crack!

On a universal level are heartwarming messages about finding one’s true identity and the love between Mother and Child. Its celebration of finding one’s place in life also connected with both children and adults in the audience.

Ugly’s literal and learning journey is played out together with shifting seasons – from losing his way at a hide-and-seek-game under the hot Summer sun – to Mother Duck’s pining for her lost child as Autumn leaves fall. Clever staging with large windy flags transports audiences to a gauze-draped Winter of falling snow and tinkling music before Spring finally ushers in Ugly who has transformed into a sleek swan.

The key takeaway: to belong does not depend on what one does but more about being true to self and secure in your identity before doing what it takes to fly.

Fairytales, given the simplicity of the narrative structure, open themselves to fresh interpretations of age-old themes. In this case, The Ugly Duckling leaves behind a discourse on inner beauty, love and importance of family even after leaving the nest.

Overall, this physical storytelling was a colourful 60-minute re-imagination of a classic for ages three and above.