Ji Gu Pa is a childhood hand-game we play in Singapore. On the surface, it looks similar to scissors-paper-stone and is a two-player game, but both players use both hands.

While scissors-paper-stone is based on each of the game elements defeating another (i.e. scissors beats paper, paper beats stone, stone beats scissors), Ji Gu Pa is a game of reactions where each player’s objective is to catch the other player doing the same hand symbols as theirs.

How to Play Ji Gu Pa

The game starts with both players saying “Ji Gu Pa!” and opening both hands with their starting hand symbols.

Players take turns fielding different hand combinations against each other until one player loses by having both hands knocked out of the game. 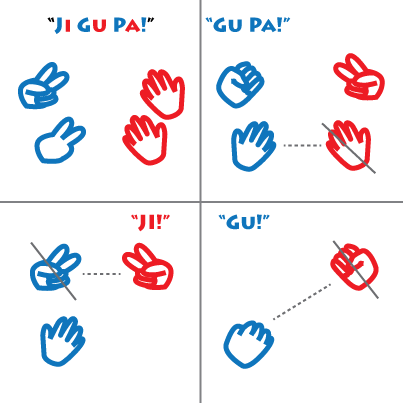 Anyone growing up in Singapore would remember this fun game being played during recess time, or before and after school while waiting for the school bus. In today’s context, iPad games seem to win the the day.

So how about bringing back some good old-fashioned fun that is free for your family and kids? It makes a great bonding session and teaches them to think quickly and be spontaneous! “Ji Gu Pa”!