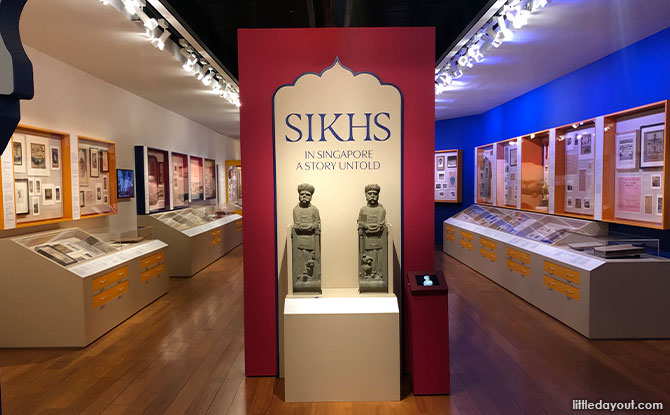 Explore the origins of Singapore’s Sikh community at the Indian Heritage Centre in their newest exhibition Sikhs in Singapore – A Story Untold. The exhibition invites visitors to gain a deeper understanding of this small but prominent Singapore Indian community by telling its lesser-known stories in three parts: Roots, Settlement and Contemporary Perspectives, each offering an expounded presentation of Sikh heritage. 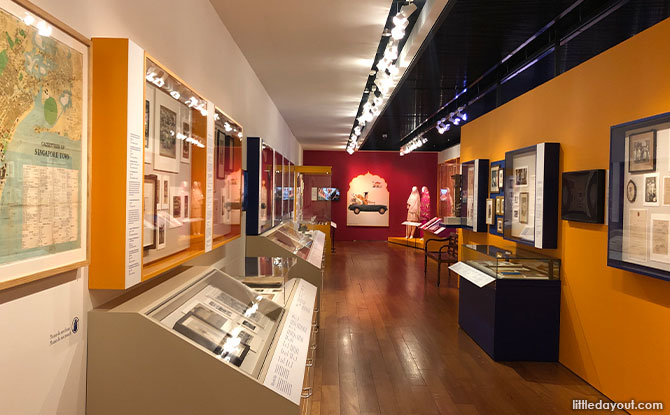 Sikhs in Singapore – A Story Untold is the Indian Heritage Centre’s second community co-created exhibition and has the highest number of artefacts for any special exhibition at the Indian Heritage Centre to date. It has more than 450 artefacts, from over 50 local and international private collections, institutional collections of 17 Sikh organisations in Singapore, as well as Singapore’s National Collection. 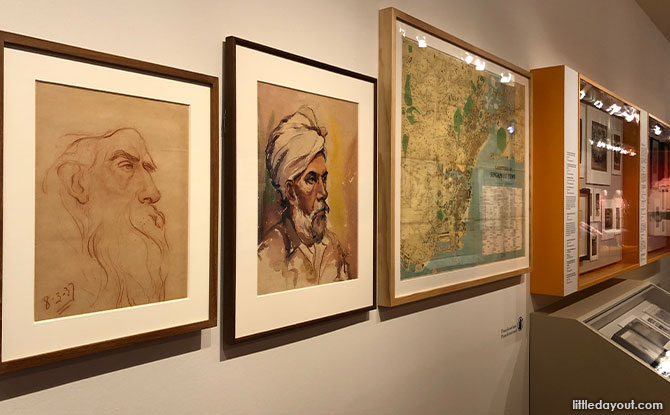 Each section has its own unique set of artefacts and write-ups, and here are five of the must-see artefacts and artworks as you explore the exhibition.

Five must-see artefacts and artworks at Sikhs in Singapore

A Tanjore-style painting of the Ten Sikh Gurus 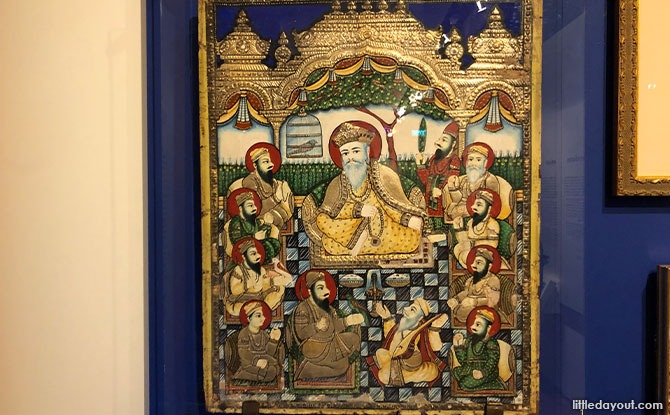 The first item to look out for is a Tanjore-style or South Indian style painting of the Ten Sikh Gurus made. This painting was dated to be around since the 14th ce. This painting has the ten spiritual guides, or gurus, of the Sikh faith are held in utmost reverence by the Sikhs. Nine subsequent Gurus built upon this foundation and spread the faith’s teachings. They also built centres for religious discourse and worship, codified the teachings into the holy book, and ensured the continuity of the practice of langar or free kitchen. 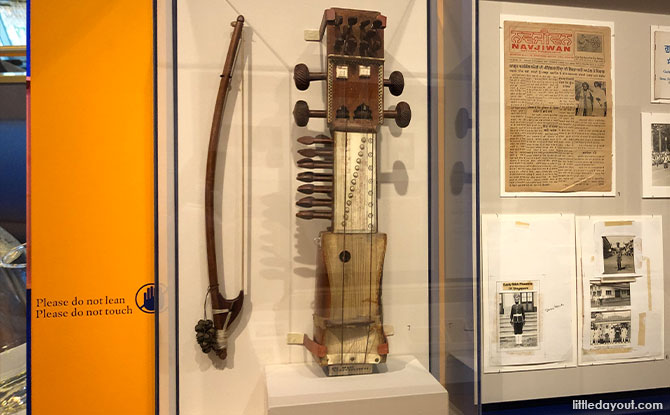 The Sarangi is a bowed, short-necked string instrument made with Wood, metal, ivory, leather and horsehair. It is commonly used in Punjabi Folk Music and said to most resemble the sound of the human voice as it can imitate vocal ornaments such as gamaks (shakes) and meends (sliding movements).

This Sarangi belonged to Seva Singh was recognised for contributing much to the culture and arts scene in Singapore. He was awarded a shield by the Indian Chamber of Commerce in Singapore and was also given the highest honour in India, where he was presented with a siropa (a symbolic shawl) in the Sikh Golden Temple in Amritsar. 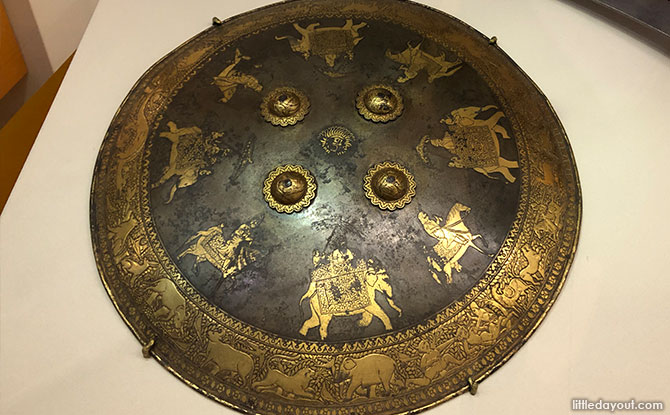 Arms and armour were an important part of the material culture of the Sikh Empire, as much of the Empire’s strength rested on its army. Highly decorated shields such as the one found in the exhibit would likely have belonged to higher-ranking officers or noblemen. This shield is Steel ornamented with gold leaf images of figures riding on horses or atop elephants and features various animals along its outer rim.

A Traditional Pakkhi made in the 1960s 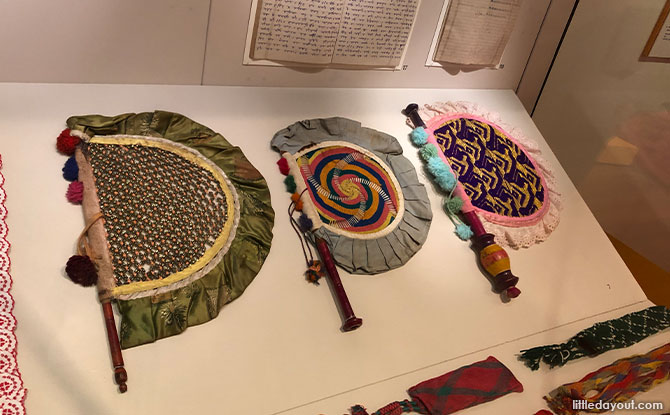 One of the section of the exhibit highlights the life of most Sikh women in 20th century Singapore. During this time, domestic chores took up most of the day of a Sikh woman. Clothes were often stitched at home, as were pillowcases and bedsheets. Decorative crafts included the making of objects like pakkhi or hand fans which were given as traditional bride gifts. These and were being made by Sikh women in Singapore even up to the 1970s and were made as a means of socialising after the day’s work was done. 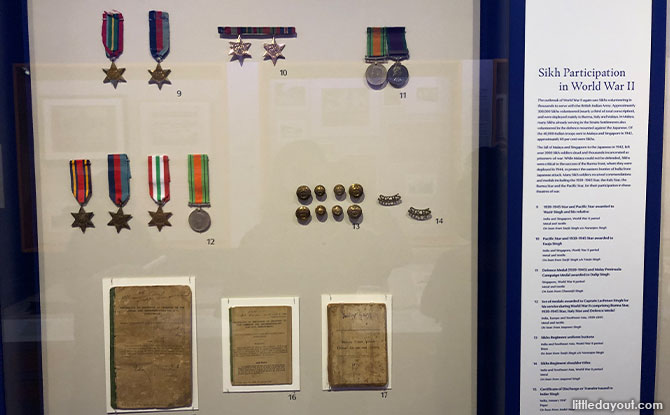 Found in the Japanese Occupation and the Indian National Army section of the exhibit, read more about the faces and also the artefacts that existed during this significant time period. Look out for the set of medals awarded to Captain Lachman Singh for his service during World War II comprising Burma Star, 1939-1945 Star and Italy Star India, Europe and Southeast Asia, 1939-1945. You can also see many other interesting artefacts such as logbooks and official papers given to the police officers during World War.

Sikhs in Singapore – A Story Untold 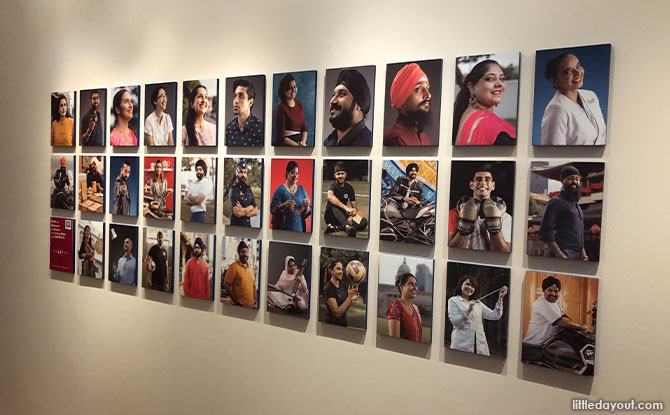