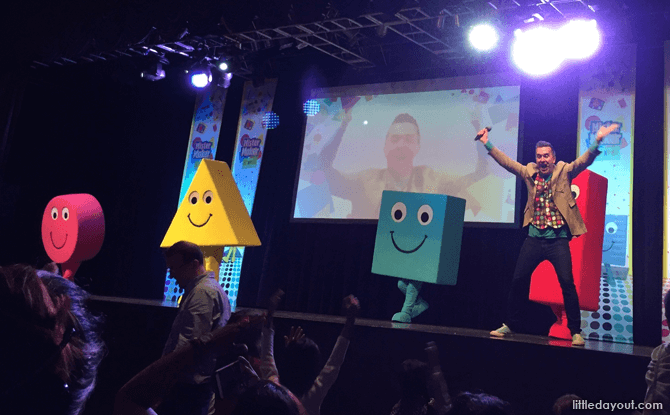 By the second half of the show, he had them dancing right in front of the stage, singing along with gusto and responding to his questions with loud enthusiasm.

With its rousing musical numbers, mass audience participation, and the high-energy craft action we love from the TV series, this production feels like a mash-up between Mister Maker and Hi-5.

The Shapes – and Mister Maker of course – are clearly the stars of the show. The script is written around them; activities are planned around them. So when they finally appeared in the second half of the show – the audience had to shout “wake up!” to stir them from their slumber – the children were super excited.

With just a little encouragement from Mister Maker, many got out of their seats, made their way to the front of the stage, and remained there till the end of the show.

Mister Maker engaged the adults in the audience too. He encouraged photo-taking – “I want to see more of those flashes”, he said – and made references to music from the eighties and nineties, turning the finale into a mega 80s/90s dance party.

“If you dance, I’ll dance!” said Mister Maker. And boy, did he display some moves!

The party ended on a high. It was a fun night out for adults and kids alike. One thing I was personally left yearning for was more art and craft time. It would have been nice to have Mister Maker create a giant artwork on stage with kids, like what he does in the TV series.

But looking at the faces of the dancing, jumping kids, I think they didn’t miss that at all and were happy with the way the show shaped out.

Mister Maker and the Shapes Live on Stage is now on at D’Marquee, Downtown East till Sunday, 12 June 2016. Tickets are available from SISTIC.

Read our interview with Mister Maker.