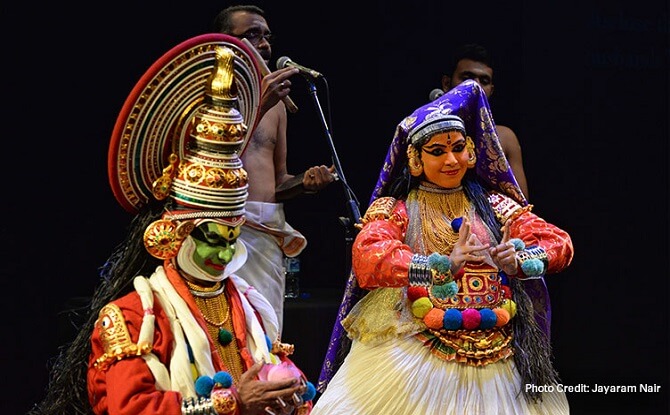 Kathakali (story play) is one of the eight Indian classical dance forms. Originating from the South Indian state of Kerala, kathakali evolved in the late 16th century from older Indian art forms, before it reached its present spectacular form, where it is noted for its elaborate makeup and costumes. The actors do not speak or sing, but instead concentrate on dance sequences and particularly on the intricate style of acting called abhinaya, where the facial muscles, eyes, and eyebrows are as trained and as developed as body movements. An orchestra of different types of drums, gong, and cymbals and a singer usually accompanies a kathakali performance.

Explore two stories from the Hindu epic, the Mahabharata, told through kathakali. Kalyana Sougandhikam tells the story of Bhima, the son of the lord of the winds, and his wife Panchali, when she asks him to search for the rare, night-blooming sougandhikam flower.

The other story is Duryodhana Vadham, which describes the conversation between Panchali and Krishna after being humiliated by Druyodhana and Dussasan. Panchali seeks Krishna’s promise to prevent any reconciliation between the two warring parties – the Pandavas and the Kauravas, until she avenges herself.