2023 is the Year of the Rabbit, Orchid Live Seafood is inviting all diners to feast their way into an auspicious new year. Starting from 7 January 2023, there will be the launch of two menus of dishes alongside a house-made pencai and yusheng platter that can be enjoyed from only $58 per pax and from $68, respectively.

This Chinese New Year 2023, Orchid Live Seafood’s two set menus: INDULGE and PREMIUM, serve groups of 4, 6-7 and 8-10, and consist of premium ingredients that are added to wish all diners good health, wealth, and happiness. One unique part of the store to take note of when visiting is the Live Seafood display. Diners can expect to enjoy seafood that is imported form reputable sources and caught fresh from the tank in the store. We were impressed by the size of the different seafood options available. A dish that completes either set menu is the prosperous yusheng platter to toss to an auspicious new year. Diners can choose from Abalone ($68), Geoduck Sashimi ($88) or Southern Australian Lobster Sashimi ($198) to mix it all up with fresh ingredients and toss to good luck and greater health and wealth this new year. There are different ways to begin the feasting. Orchid Live Seafood offers a Braised Whole Shark’s Fin Soup with Crab Meat which has a pork bone broth base, dried scallops and dried mushrooms, and thickened with collagen, shark fin, fish maw, fungus and crab meat. The Furong Steamed Southern Australian Lobster is a must try. This dish consists of a whole lobster steamed to juicy tenderness and served on a bed of silky steamed egg and lobster roe. To enhance the natural sweetness and of the lobster, the garlic, spring onion and a premium house-made soya sauce adds additional fragrance with every bite of this firm yet chewy crustacean. To wish diners “nian nian you yu”, customers can also order a HK Steamed Live Soon Hock with Superior Soy Sauce which is simply steamed to retain its natural sweetness. It is then topped with fried pork lard, spring onion, Chinese parsley and superior soya sauce to draw out the flavours. Those who can’t get enough of the shellfish goodness, Orchid Live Seafood’s Scallops Served with Crab Roe and Broccoli has whole medallions of Japanese scallops that are stir-fried with creamy egg whites and accompanied by broccoli for added crunch. It is topped off with crab roe for extra richness. For an abundant end to the meal, one can order the Five Treasure Lotus Leaf Rice with Crab Meat where fragrant glutinous rice is folded in with dried mushrooms, premium dried scallops, lap cheong, salted egg and dried shrimp, topped with crab meat. This mix of ingredients are then steamed in a lotus leaf wrap for a fluffy and fragrant taste and texture. 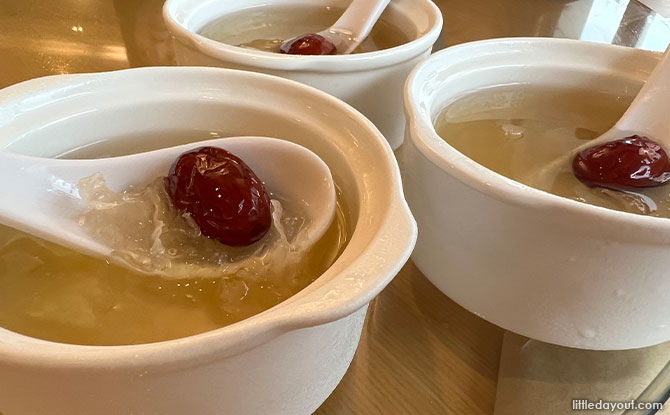 To end off the sumptuous dinner, diners can order a variety of desserts, such as Premium Bird’s Nest Soup with Red Dates.

Those looking to make their reservations can do so at Orchid Live Seafood’s website.