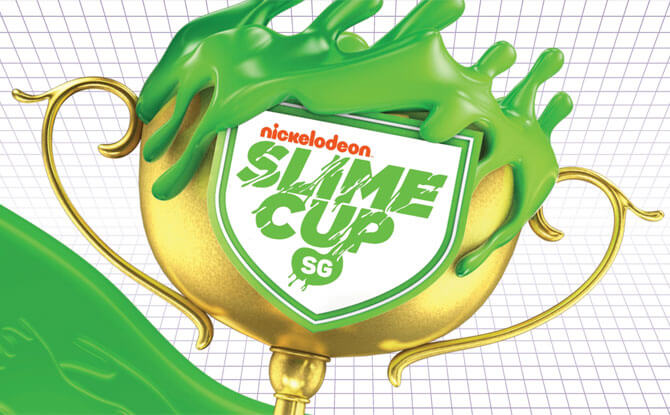 This year, the Nickelodeon Slime Cup 2018 is inspired by video games and will feature activities like a Slime Sewer Obstacle, Capture the Slimy Flag and a giant Slime fall arcade machine. This rain-or-shine, free-to-play event will also have photo sessions with a cast of Nickelodeon characters and plenty of green slime.

Referencing video games, Nickelodeon Slime Cup 2018 participants will be known as Players. They will need to take part in ten Game Stages in order to earn Experience Points. They can also go head-to-head with friends to be the Slimiest Player and take home goodie bags.

Among the Game Stages that await players at Nickelodeon Slime Cup 2018 are a slimy bubblegum tube, a turtle crawl through ninja obstacles and augmented reality dodgeball.

SpongeBob SquarePants, Patrick Star, Leo and Donnie from the Teenage Mutant Ninja Turtles and Shimmer and Shine will also be making appearances for photo-taking sessions with fans.

Other activities in store at the Nickelodeon Slime Cup 2018 include a Slime Salon and Slime Trick Art activities.

“For our sixth Nickelodeon Slime Cup SG, kids and their families can look forward to experiencing some of their favourite Nickelodeon games in real life, as if they are stepping into a giant Slimy video game. We are definitely levelling up play, surprise and imagination and bringing what’s typically indoors, outdoors!”, said Ms. Syahrizan Mansor, Vice President, Nickelodeon Asia, Viacom International Media Networks.

Get full details about the Nickelodeon Slime Cup 2018 here.