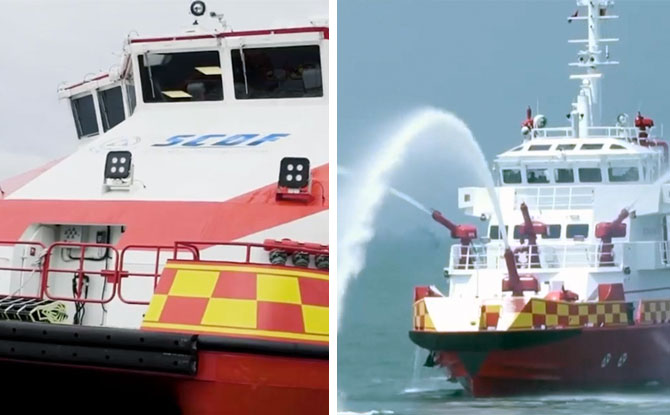 This year’s Maritime Sailpast, with a flotilla of ships parading off the southern coast of Singapore, will be the first in 20 years. 13 vessels from the National Maritime agencies in Singapore, Republic of Singapore Navy, Police Coast Guard, Singapore Civil Defence Force and Maritime and Port Authority, will be coming together for the Maritime Sail Past NDP on 9 August 2020.

The naval tribute will be conducted at 10.50 am at the Marina South Pier as part of the morning’s activities. It will be held against the Marina skyline to depict Singapore’s development over the years.

The 13 vessels involved in the NDP2020 Maritime Sailpast will be in two parallel columns – the Main Column and the “Speedster Column.

The nine vessels in the main column are:

In the Speedster column are:

All of the ships will sound their horns for 15 seconds towards the end of the sailpast
to express maritime unity and as a call for Singaporeans to stand together in solidarity.

The Singapore Civil Defence Force recently provided a sneak peek with a video on what to expect at the Maritime Sailpast.

In video, viewers who have been following SCDF’s virtual fire station visits will recognise the effervescent Lieutenant Lina.

She is joined by Captain Nazri and together they introduce the three vessels operated by the SCDF that will be part of the Maritime Sail Past off the waters of Marina Bay.

Look out for SCDF’s Heavy Rescue Vessel which is also known as the Red Manta. It can travel at a top speed of 65 km per hour.

Another ship involved in the National Day celebrations Maritime Sailpast is the Heavy Fire Vessel, also known as the Red Sailfish.

It is the world’s most powerful firefighting vessel with 12 water monitors and is able to pump 240,000 litres of water in one minute.

The last vessel that will be part of the sailpast on National Day is the Rapid Response Fire Vessel known as White Swordfish. It is the SCDF’s fastest vessel and has a travelling speed of up to 75 km an hour

In the video, you can also see the smartly dressed men from the SCDF giving a salute from the deck of the ship.

The video ends of with Lieutenant Lina singing and dancing to a National Day song.

We think SCDF has its “game on” when it comes to making fun and entertaining videos. Two thumbs up.

We are looking forward to the Maritime Sailpast NDP on the morning of 9 August 2020 as Singapore’s vessels pay special tribute to our frontline workers.

In the meanwhile, you can watch the SCDF Facebook video on the SCDF ships taking part in the NDP Maritime Sailpast below.

Get Taste Of Italy With The Italian Festival In Singapore: Now On Till 1 July 2022