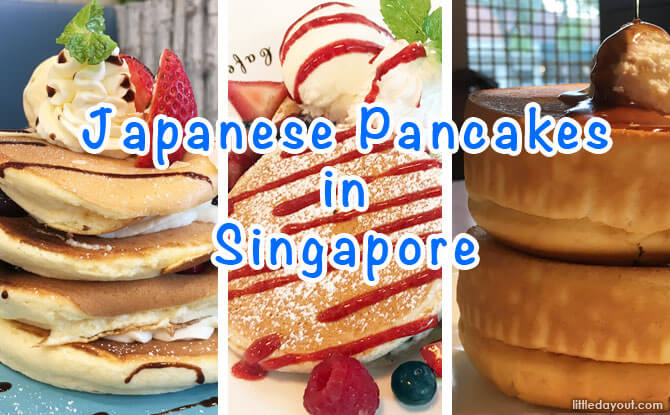 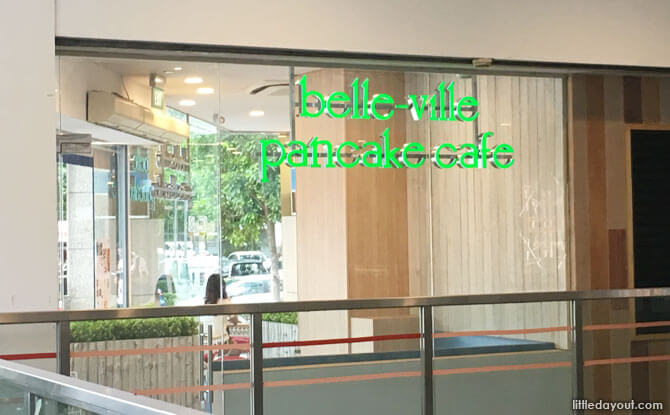 Our first stop was not only the newest but also the smallest. Belle-Ville Pancake Café only opened in late June 2018 and has already been attracting long queues on the weekends.

The cozy café can be found at Bugis Junction’s office tower facing the corner of Victoria Street and Rochor Road.

We placed an order for a stack of four Strawberry and Mixed Berry Pancakes ($14.40), one of their most popular menu items. 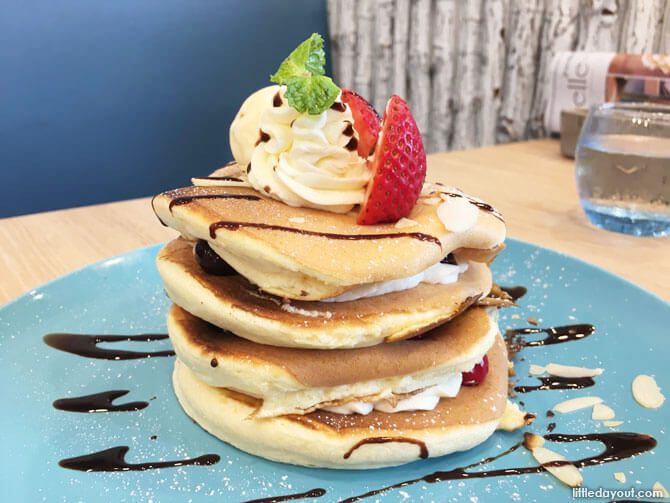 The pancakes arrived stacked up high. Between each layer were generous swirls of Hokkaido cream and mixed berries. The pile of pancakes was topped off with strawberries, cream and drizzled with chocolate sauce.

Belle-Ville’s meringue pancakes were light and airy. They also have a distinct meringue taste. The pancakes paired well with the tartness of the berries and smoothness of the cream. 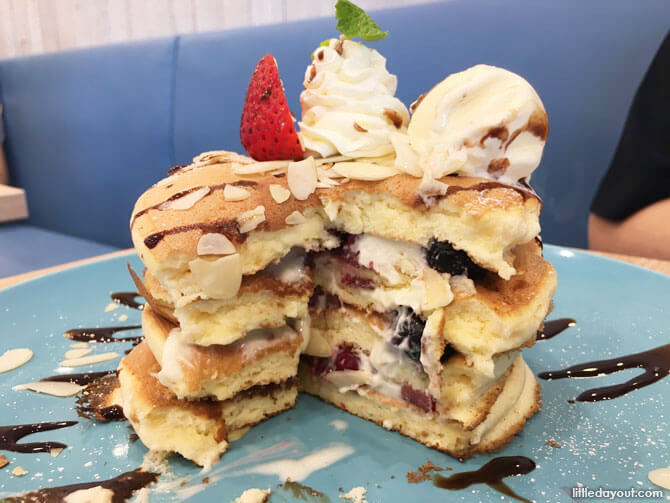 Even though there was a jar of pancake syrup at the table, we didn’t need to reach for it as the fluffy pancakes were good enough on their own. 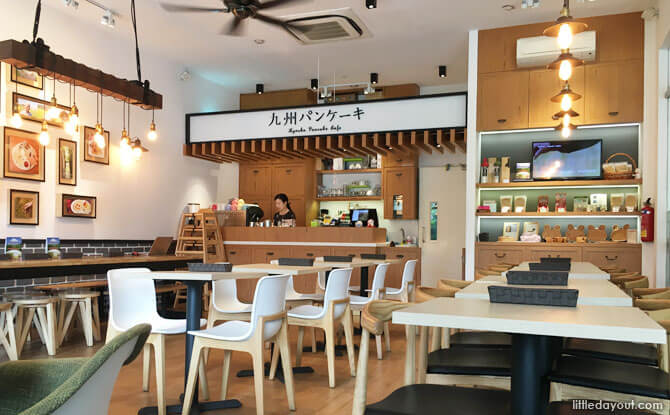 Our next stop for Japanese pancakes in Singapore was Kyushu Pancake Café at Novena Regency along Thomson Road.

Open since 2016, Kyushu Pancake makes use of seven grains from Kyushu, Japan in its pancake flour.

We ordered one of their most popular menu items, the Berry-Licious Pancake ($16.90). 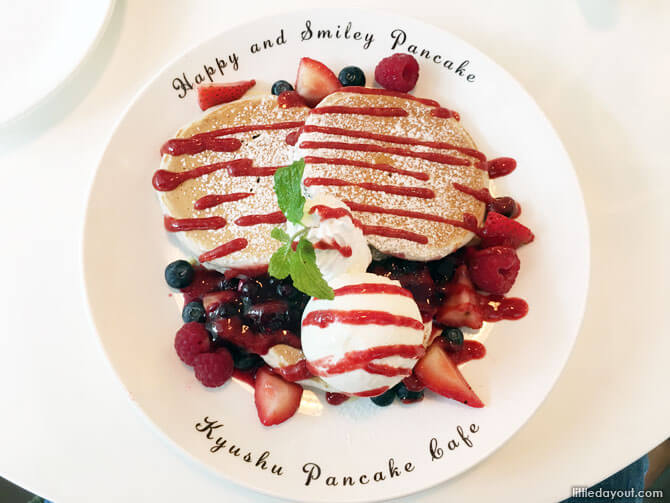 The pancakes, three per serving, came laid out on the plate rather than as a stack. The plate was beautifully presented with a burst of colour from the berries. Topping off the pancakes was a scoop of vanilla ice cream. 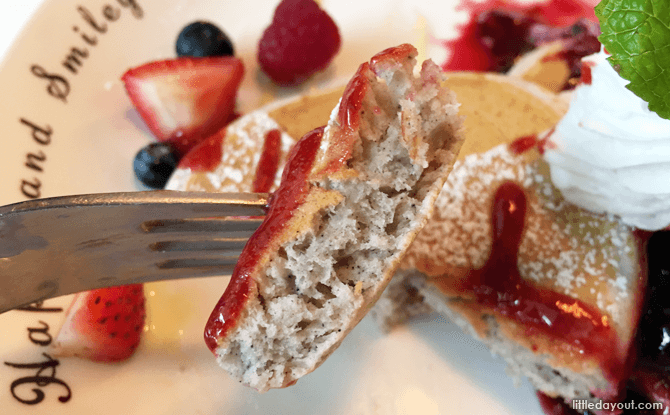 Compared to the meringue-like texture of Belle-Ville’s pancakes, Kyushu’s pancakes have a more “pancake-like” texture. While still soft, the grains in the flour gave the pancakes a more substantial consistency. They were quite delicious. 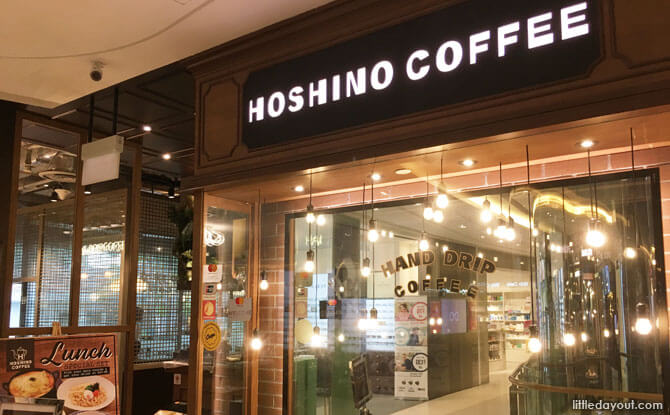 Hoshino Coffee offers soufflé style pancakes which come with a choice of maple syrup or honey syrup and topped off with a dollop of whipped butter.

In addition to regular pancakes, Hoshino also offers seasonal pancakes which change throughout the year and matcha pancakes. 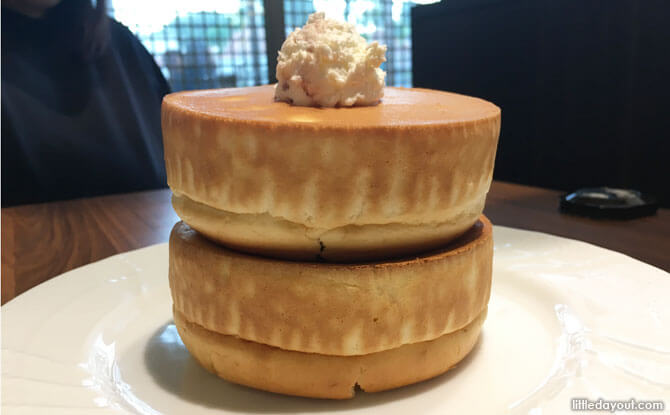 While the menu stated that we would require an approximate waiting time of 20 minutes, ours came much sooner.

The two soufflé pancakes were stacked high like a tower. Hoshino Coffee’s pancakes were much thicker than the pancakes at Belle-Ville and Kyoshu. 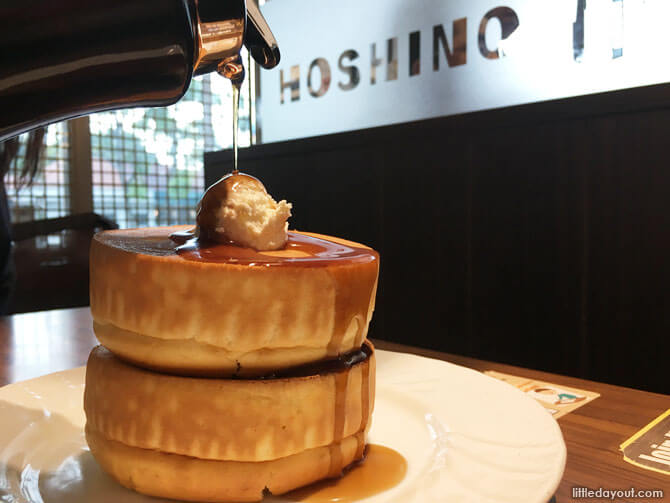 They were also quite dense and closer in consistency to cake. 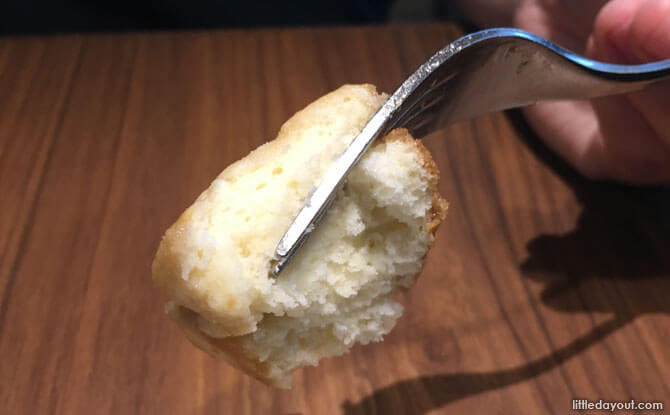 On their own, the pancakes were a bit dry. Therefore, we found ourselves reaching for the maple syrup jar quite often. Perhaps we should have ordered a scoop of ice cream with the pancakes instead.

After trying the three different Japanese pancakes in Singapore, we concluded that our favourite was… Belle-Ville Pancake Café’s pancakes.

They were light and fluffy, and paired very well with the fruits and cream. They reminded us most of the pancakes which we had had in Japan and left us wanting more.