Home Learn From Singapore To Singaporean: The Bicentennial Experience – A 700-Year, Time Traveller... 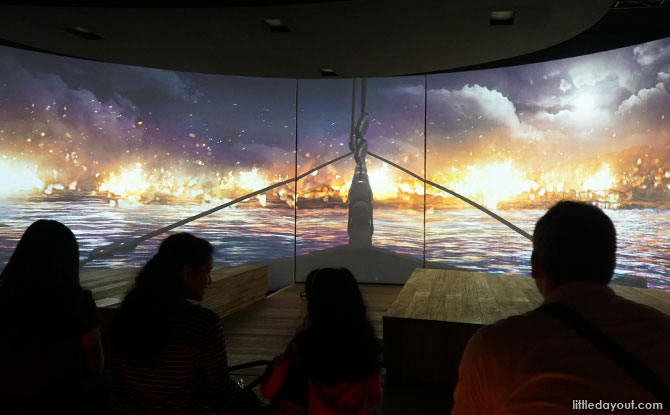 From Singapore To Singaporean: The Bicentennial Experience at Fort Canning Hill is one of the highlights of this year’s Singapore Bicentennial commemorations. The two-part showcase consists of an indoor presentation and an outdoor trail. Together, they present a way for visitors to explore and experience Singapore’s past while reflecting on the road ahead.

Time Traveller, the indoor, multisensory presentation of From Singapore To Singaporean: The Bicentennial Experience takes place inside Fort Canning Centre.

Visitors to Time Traveller are moved from room to room around the building with different Acts at various location. Collectively, these provide a creative retelling of the Singapore story in a fresh and immersive manner.

Here is our experience at the recent media preview. 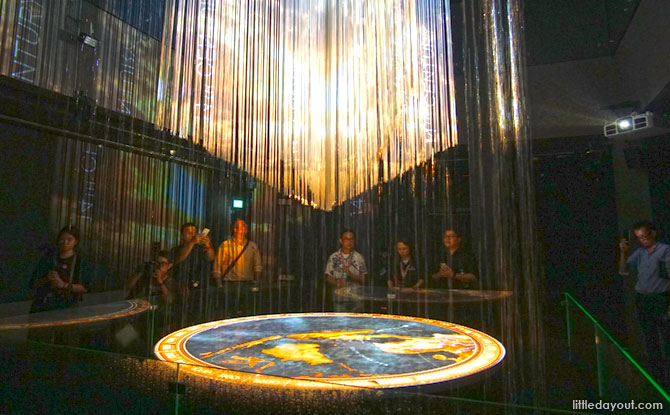 The first stop on Time Traveller was the Atrium. Here, there was an installation which featured falling water – which then starts to flow in reverse. This signified how the weather can play a role in the rise and fall of fortunes and also served as a prelude to the upcoming Acts. 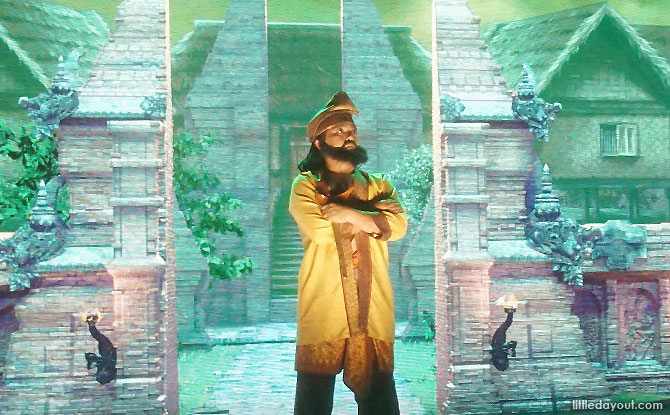 We were then ushered into the next room where Act 1 awaited. Here, the story of Singapore from the 1299 to 1613 was told through a combination of live performers and multimedia projections. The performers and projections blended together well, both seamlessly and, with the creative use of motion for the active, impressively too.

The presentation featured characters such as Sang Nila Utama and other personalities whose paths brought them across Singapore’s shores from the 14th to 17th centuries. It offered an interesting narrative of Singapore’s more-distant past. 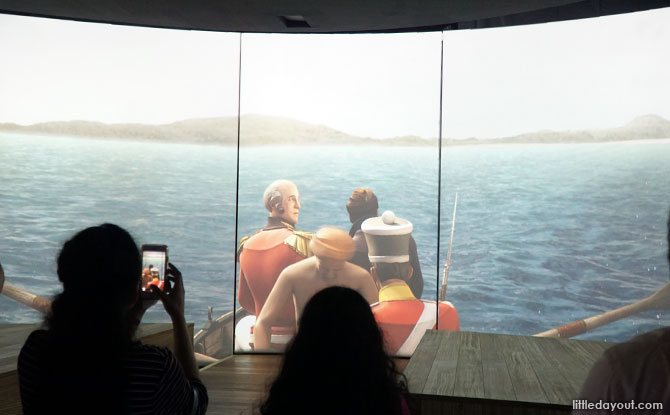 We were then transported on to the deck of the Indiana, the ship which Raffles sailed to Singapore on in 1819, at the next room. Sweeping animations provided a riveting look at the familiar events which took place with the arrival of the British in 1819.

We only wished that all history lessons could be this engaging. 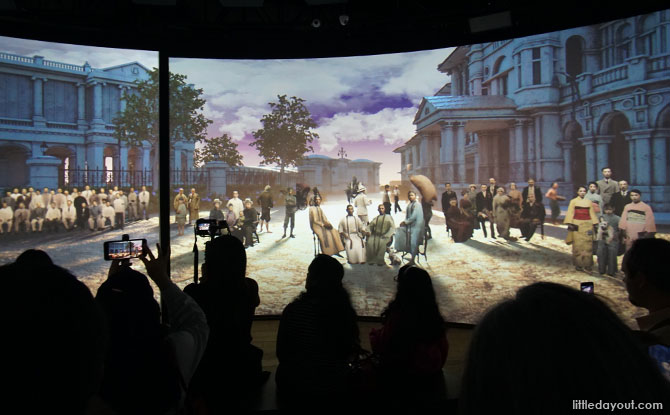 The dynamism of a growing city was captured in Act 3 of From Singapore To Singaporean: The Bicentennial Experience. A 360-degree, wrap-around screen, augmented with motion, provided a cinematic look at the pace of development in Singapore between 1867 and 1941. 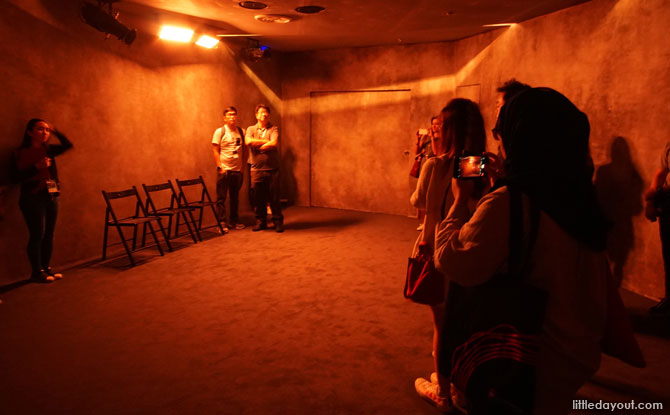 The optimism of the previous act was replaced by a tense shadow in Act 4: Occupation. This segment of The Bicentennial Experience started off in a darkened room that had us feeling as if we were hiding in a wartime bomb shelter.

This was followed by a walk down a narrow corridor with “cracks” in the wall that allowed us to get a peek into what life was like during wartime.

This Act ended with a harrowing account of a Sook Ching survivor’s narrow escape from death. 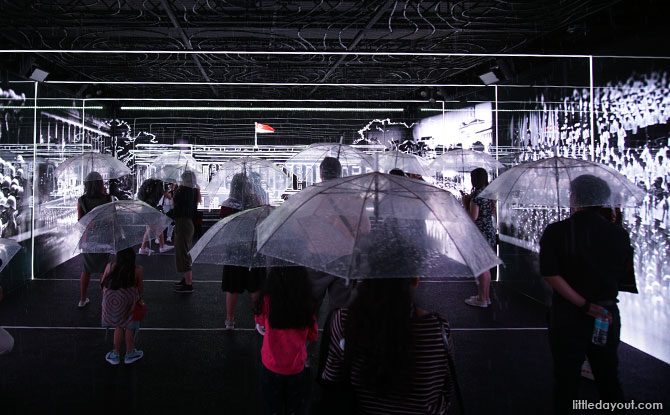 While many exhibitions claim to be immersive, From Singapore To Singaporean: The Bicentennial Experience elevates this claim to a different level in Act 5. We were literally standing around in pouring rain under individual umbrellas. Immersive indeed.

Figuratively, the rain represented the many storms which Singapore weathered post-World War II and on the road to independence. The Act also highlighted more recent high points such as the Malaysia Cup win of 1991 and crisis such as the SARS outbreak of 2003.

The rain was a poetic way to bookend The Bicentennial Experience, balancing off the water installation at the Atrium. 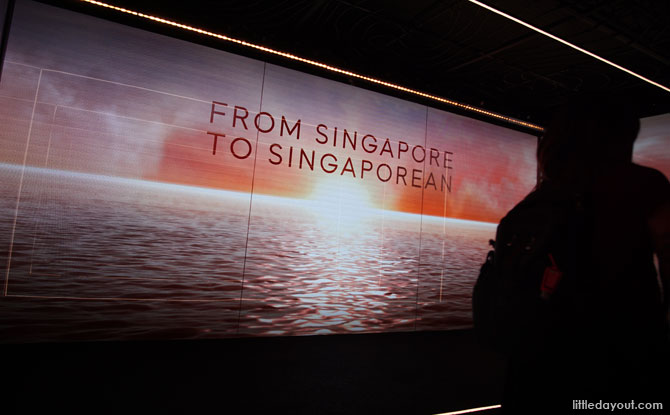 After Act 5, there was also an opportunity to respond by voting for one-of-three values that have played a role in Singapore’s story.

We left Time Traveller impressed and felt it was well and innovatively presented. 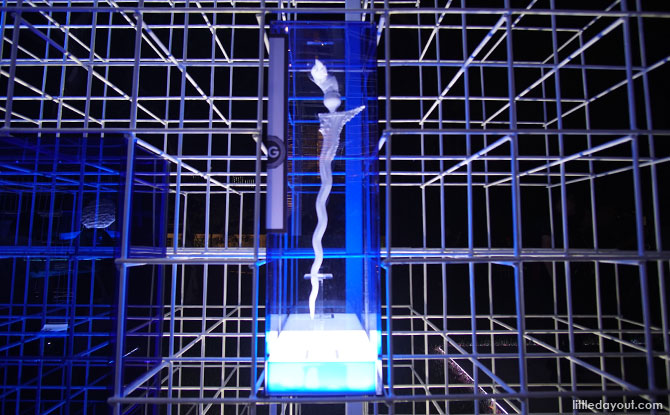 The second part of the showcase, Pathfinder, is a set of outdoor pavilions which have been setup close to the Fort Gate, up the flight of stairs from Fort Canning Centre.

The themed pavilions include Emporium of the East, House of Maps and the Seed Conservatory, amongst others. 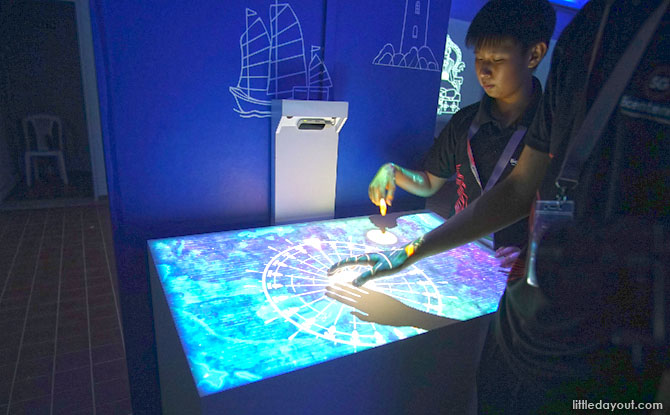 Don’t miss the Observatory at the Old Married Soldier’s Quarters, where Singapore’s timeline is juxtaposed side-by-side with events on the world stage. 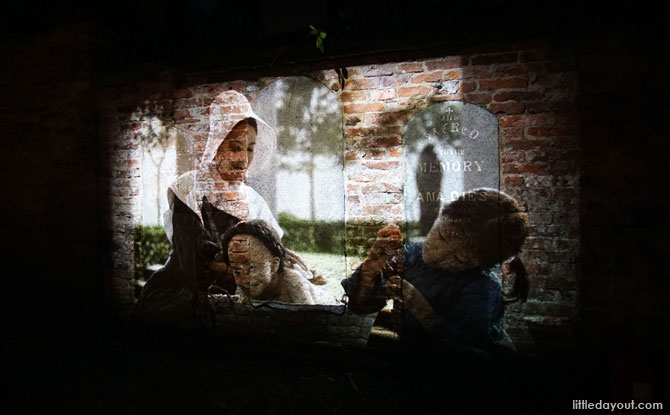 In the evening, four site-specific short films, created by Brian Gothong Tan, imagine and explore the themes of multiculturalism, love and compassion can be viewed at Fort Canning Green.

These have been inspired by early Singapore stories such as the life of Agnes Joaquim and the Gate of Hope at the former CHIJ school compound.

Visiting From Singapore To Singaporean: The Bicentennial Experience

From Singapore To Singaporean: The Bicentennial Experience opens to the public from 1 June to 15 September 2019. Admission is free but ticketed. Tickets can be booked online from the Singapore Bicentennial website.