Home My Little Day Out Fort Canning Park: Exploring The Battlebox During the Holidays 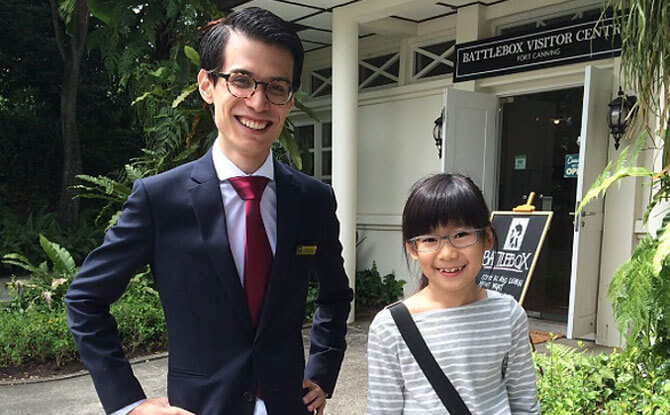 The day before yesterday, my wish finally came true. My mum was willing to take me to the Battlebox at Fort Canning Park!! I could barely sit still on the taxi ride there from my brother’s school. However, I reached there forty-five minutes early and my mum and I had to walk around Fort Canning Park for a while.

We went to the 19th Century Walk and my mother and I saw a fragment of the once-great Fort Canning Wall and the wall’s gate.

The tour was supposed to start at 9.45 a.m., but in our excitement, we got the timing wrong and turned up for the tour fifteen minutes early.

After twiddling our thumbs for fifteen minutes, our tour guide finally showed up. His name was Jerome, and he kind of looked like Harry Potter.

We took a short walk in the 19th Century Walk (again!) and he told us facts about the Battlebox.

As if to confirm he was taking us to the exact same place, I once again saw the faded blue entrance to the Battlebox. Stencilled white on the entrance were the words “DO NOT ENTER. PLEASE USE THE OTHER ENTRANCE.”

He told us of how the name “Fort Canning'” was adopted. It was named after Sir Viscount (pronounced Vi – Count) Charles John Canning.

I asked Jerome if I could go to the sally ports, and he replied that I couldn’t because it was part of the old fort, and the old fort had been demolished as forts had become redundant by the Second World War. After bombs, torpedoes and airplanes had been developed, they did not need forts and cannons anymore. So I was not able to go to the sally ports. What a disappointment!! 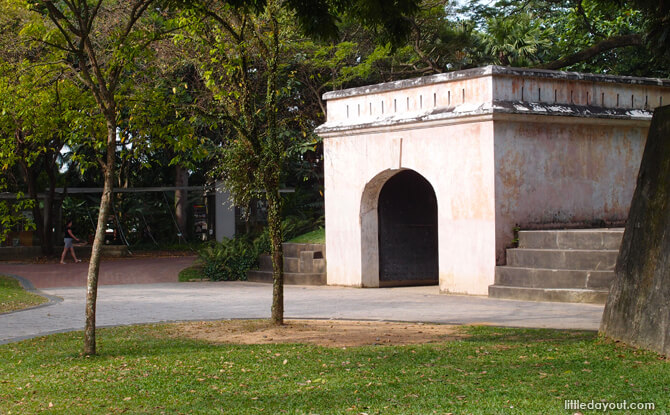 Back then when Singapore was part of the Malaya Empire, they called present-day Fort Canning Hill “Sacred Hill” or “Bukit Larangan” in Malay.

They called it “Sacred Hill” as only kings were allowed up there. The Malay kings chose “Sacred Hill” to live in as it gave them a commanding view of Singapore. Shortly after the British colonised Singapore, they changed the name from “Sacred Hill” to “Government Hill”. As its name points out, many governors used to reside there in the 19th century.

Fort Canning Hotel used to be a former British Military Administration Building. It was built in 1926. When I asked why they were focusing on how their military base looked like instead of warfare, Jerome simply answered, “You mustn’t forget, this was in the 18th century. All buildings used to look like this.”

It was really a waste of resources, manpower, time and effort when the Combined Operations Headquarters at the Royal Air Force base in Sime Road was bombed by the opposition just two days after the grand opening!!

After Jerome answered my questions about Government Hill, we entered the Battlebox.

My nerves tingled with excitement as I clambered down the staircase leading to the underground bunker. I had been waiting for this moment since last year when I read an article about the Battlebox in the Straits Times.

The Battlebox, Jerome had told us, is nine-meters deep, the equivalent to three storeys with a standard height of three meters.

The reason why it was underground was to keep it safe from bombing. In other words, the enemy couldn’t have bombed through the dirt, so it was quite secure. There were hundreds of men and women cramped into that bunker and it got so stuffy that the men had to saw off pieces of the metal door. Apparently the air vent wasn’t big enough!! Now I’m grateful that they restored the Battlebox and put in air-conditioning for us!!! 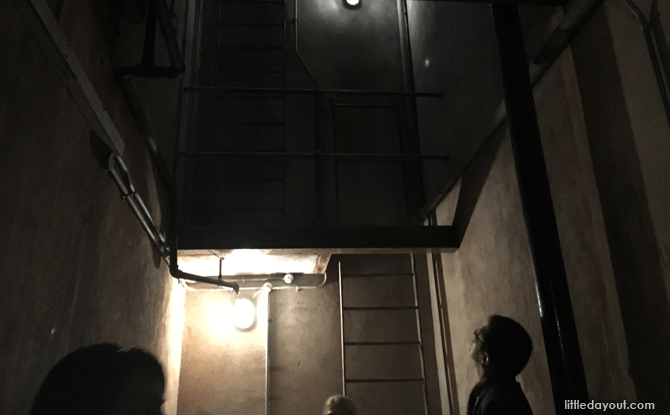 The room which used to hold an air filtration plant was the first room that Jerome led us to. It contained one control box, one projection screen and an air conditioning duct.

Jerome then briefed us on the layout of the Battlebox. He showed us the official blueprint of the Battlebox. When I asked who was the person who drew this blueprint, he asked in return why and I replied it was because this person had very messy handwriting. He laughed for a while before carrying on with the tour. 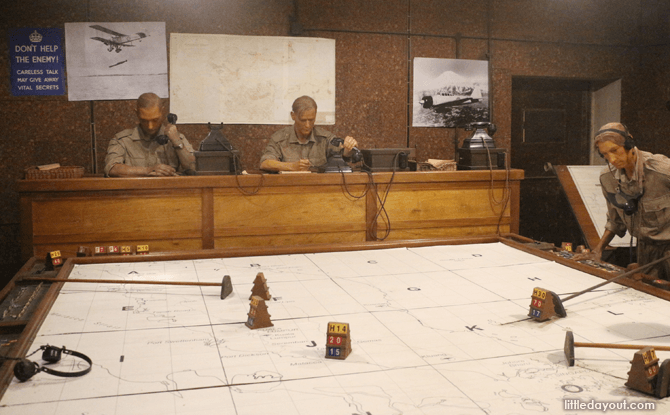 After that, he led us to a room where several people (wax figures) were holding long sticks with a semicircle at the end pushing around little racks with numbers and letters in the rack.

When I asked why the British men were playing pool table in the middle of the war, he and my mum laughed and said that the thing at the bottom was a map and the little racks represented fleets of planes.

The letter ‘H’ represented ‘Hostile’ and ‘F’ represented ‘Friendly’. So for example, I saw H14. The number 14 is code for the enemy fleet.

The one major factor in Britain’s defeat was that all their airplanes was defending Britain. They called it the home force, which left the British forces in Singapore with all the old-model aeroplanes. On top of that, they had to contend with only half of what they ordered. They had initially ordered three hundred planes, but they only received one-third of what they had initially ordered. I had guessed around a quarter to half – so I was quite close.

Another major factor was that the Japanese had more planes and their planes were more modern than the Allies’ planes.

There was a room with a projection screen. There we watched some of the archive videos of World War II. The rooms were kind of scary. It was very dark so I thought that ghosts would spring out at any moment. I think I read too much.

The tour took two hours instead of one because I talked so much. At the end of the day I nominated Jerome under the alias “Jerome “Battlebox” for the Singapore Tourism Awards or something. All in all, I had a great day.

Thank you Jerome for educating me and my mum about WWII. 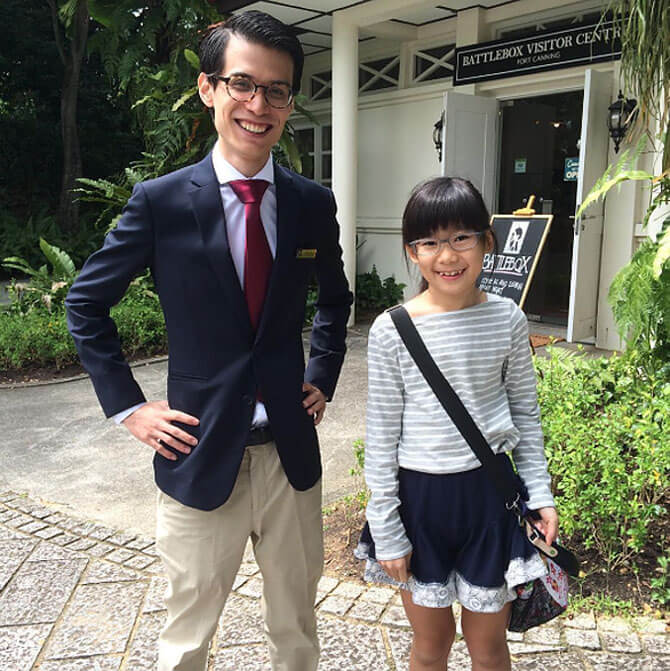 This is a My Little Day Out Story written by Leonny Ong, 11.

Find out how you can have your child’s My Little Day Out Story published and read more stories here.