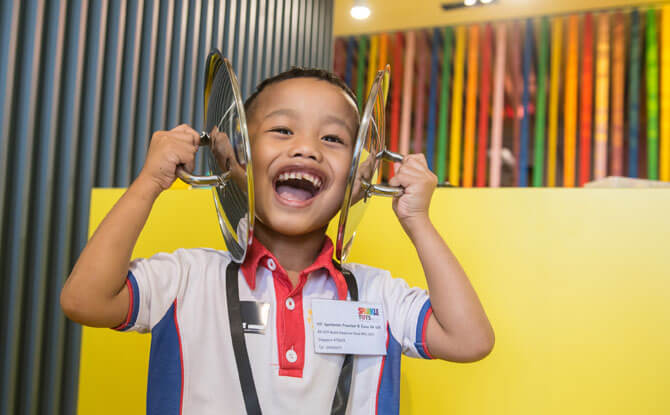 Children’s Festival: Small Big Dreamer 2018 at National Gallery Singapore will be held from 9 June to 9 September 2018. This new biannual children’s festival focuses on an inspirational Singaporean artist who has dared to dream big. It will complement the Gallery Children’s Biennale, a festival launched in 2017 that brings together children’s art programming from around the world.

For Children’s Festival: Small Big Dreamer 2018, the spotlight shines on Lee Wen, an internationally-recognised artist and a pioneer in performance art in Singapore.

Born in 1957, Lee Wen is known for his optimism and perseverance, despite his battle with Parkinson’s disease. He was conferred the Cultural Medallion for Visual Arts in 2005 and won the Joseph Balestier Award for the Freedom of Art in 2016.

Here are some highlights and things to know about the Children’s Festival: Small Big Dreamers 2018 at National Gallery Singapore.

A Waking Dream: Sun-boy and Yellow Man by Lee Wen

Experience five interactive installations based on Lee Wen’s book A Waking Dream and the series Journey of a Yellow Man.

The Rainbow Concert Hall presents an opportunity for kids to make music together before visiting the Daydream Tunnel.

Follow the Cosmic Dancer along the vibrant Rainbow Passageway and pen down your hopes and fears on a pair of wings and set them free at the Dreamers’ Haven.

Lee Wen is best known for his Yellow Man series. At the Anatomy of Dreamers, kids can search for the signature Yellow Man.

Hands On by We Make Carpets

Weave together a carpet made from everyday objects at the hands-on exhibit, Hands On. First commissioned by the National Gallery of Victoria in Melbourne, children can create works of art using household items, pool noodles and Velcro at this Children’s Festival: Small Big Dreamer 2018 exhibit.

Passage and Bridges, Evolution of Firewalk: A Bridge of Embers by Mark Justiniani

One of the most popular exhibits at 2017’s Gallery Children’s Biennale was Firewalk by Mark Justiniani. Now, the artist has a new work Passage and Bridges, Evolution of Firewalk: A Bridge of Embers which is bound to be highly popular at Children’s Festival: Small Big Dreamers 2018 At National Gallery Singapore.

The experiential work aims to connect viewers with the realm of the cherished yet forgotten.

Step inside teamLab’s digital immersive installation and encounter new characters such as frogs and rabbits in a labyrinth that blurs the line between virtual and reality.

Flowers and People – Dark by teamLab

National Gallery Singapore’s Children’s Festival: Small Big Dreamers 2018 will also feature teamLab’s Flowers and People – Dark where the audience’s behaviour will also influence the way flowers spring up and blossom around the installation.

Other highlights at Children’s Festival: Small Big Dreamers 2018 include Art Packs with activity cards and stickers which can be purchased from vending machines, Sound Makers and Family Art workshops and docent-led tours on Wednesdays and Saturdays.

When: 9 June to 9 September 2018
Where: National Gallery Singapore
Website