Home Play Character Cafes in Singapore: Cute, Themed Cafes To Hang Out At 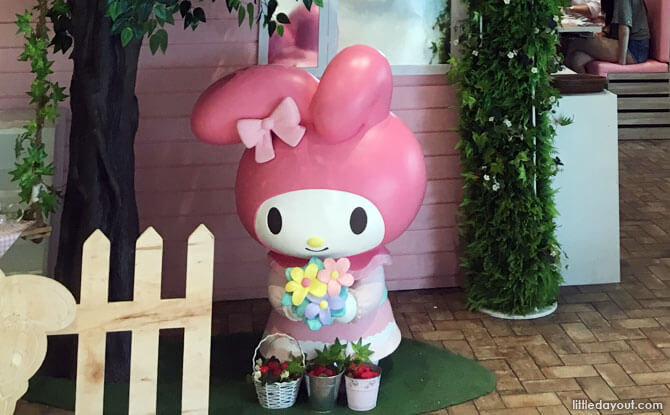 For those who love all things cute, here are some themed cafes in Singapore to check out.

Located at Changi Airport Terminal 3, Hello Kitty Orchid Garden provides a local twist to Sanrio’s popular cat with no mouth. This character cafe in Singapore is decorated with an orchid theme – a way to welcome those who see it at the airport’s Arrival Hall. Menu items include breakfast items such as the Leaning Tower of Kitty and Kitty Meets Benedict while mains include items like Land of the Rising Kitty and Take a Bow.

Another Sanrio character with a character café in Singapore is Gudetama, the lazy egg. This popular themed café at Suntec City serves up “breakfasty” dishes like toast, sausage, bacon and *ahem* eggs, along with pizza and waffles.

Sanrio characters are obviously a popular choice when it comes to character cafes in Singapore. The décor at My Melody Café, located right next to Gudetama Café, is decidedly pink. Menu items include the equally pinkish Princess Bunny curry rice dish, eggs benedict and cute desserts like Merry-Donut-Go-Round.

Dine on dishes inspired by Cartoon Network characters like Ben 10, We Bare Bears and the Power Puff Girls at the Cartoon Network Café located in Punggol’s Waterway Point. On the menu are dishes like pasta and sandwiches. For dessert, a decadent treat is its milkshake topped off with a donut.

Fans of the 90’s sitcom Friends can relive those memories again at Central Perk Singapore. Fashioned to look like the fictional New York café, this themed café in Singapore has mains, pizza and pastas on the menu, many named after the characters from the show.

Superman, Batman and Green Lantern are some of the characters that lend inspiration to the DC Comics Super Heroes Cafes. Light bites on the menu include Aquaman’s Great Salmon Goujon and The Penguin’s Squid Squad. Bite into the Superman burger or Batman’s truffle pasta for the mains. There is also a kids menu for those 12 and under.