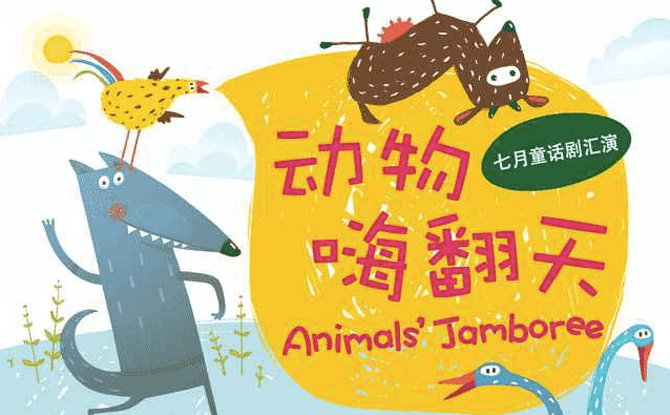 Don’t miss out on our performance, showcasing 100 young actors from our Cultural Troupe on stage, acting, singing and dancing as lively animals in 4 classic children fairy tales, “The Wolf and The Scholar”, “The Rooster and the Sun”, “Cockerel in the mirror” and “Crazy Village”.

Performed in Mandarin with English and Chinese subtitles.

The Wolf and the Scholar
A benevolent Scholar was taking a stroll in the forest when he met a voracious and malevolent Wolf, who was in hot pursuit of an adorable Rabbit. Then along came a trio of brothers, who were Hunters.

What ensued was a comical and intense scene of the Hunters chasing the Wolf, and in turn the Wolf chasing the Rabbit!

The Rooster and the Sun
Once upon a time, in the sky hung 10 Suns, whose beams shone and scorched the earth. The heat became unbearable and an expert archer was tasked to shoot them down.

The 10th Sun went into hiding behind a mountain after witnessing how all the rest was shot down.

Who could convince the last of the Suns to come out from hiding?
Cockerel in the mirror
The beautiful Cockerel was vain and conceited. He holds no interest in learning skills and of acquiring knowledge. He would often sneer and tease his fellow animal friends.

One day, a distorting mirror was placed in the forest!

The ignorant Cockerel was frightened by his own reflection in the mirror, and decided to challenge “the creature” inside to a fight!

Crazy Village
Two little Ducklings have encountered a serious problem! They could not get their shoes to match!

Enlisting the help of their neighbours, the rest of the animals in the forest try to help the little Ducklings to solve their problem.