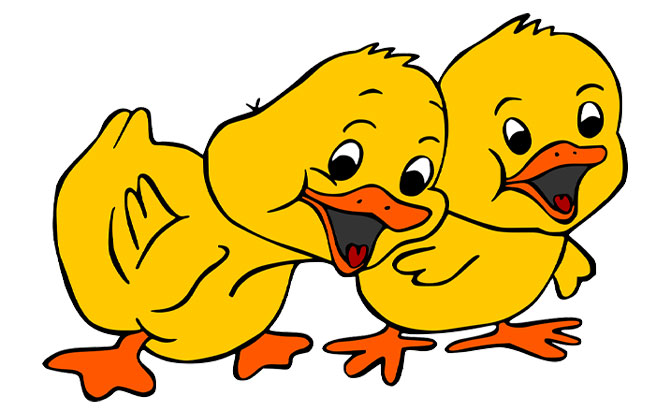 There are many different animal jokes. However, duck jokes are especially great if you’re looking for something to quack up a group of family or friends with laughter. Here are 70+ family-friendly jokes about ducks that will get you quacking up.

70+ Jokes About Ducks to quack you up 1. Why was the teacher annoyed with the duck?
Because he wouldn’t quit quackin’ jokes.

3. Why do ducks never grow up?
Because they grow down.

4. Where did the duck go when he was sick?
To the ducktor.

5. Why do ducks hate reading directions?
They prefer to wing it.

6. Why do ducks lay eggs?
They would break if they dropped them.

7. Why do ducks fly south for the winter?
It’s too far to waddle.

8. What is a duck’s favourite game?
Beak-a-boo!

9. What did the flying golf ball yell to the mallards in the pond?
Duck!

10. What type of food do you get when you cross a duck with a mole?
Quackamole.

11. What do you call a duck that loves fireworks?
A fire-quacker.

13. Why did the duck get a red card in the football game?
For fowl-play.

14. What did the duck say to the corn it ate for lunch?
You taste a-maize-ing.

15. What do you call a duck with fangs?
Count Duckula.

16. Which musician do ducks listen to the most?
Drake.

17. Why was the duck put into the basketball game?
To make a fowl shot!

18. What do you call a duck that steals?
A robber ducky.

19. Why are ducks, bad drivers?
Their windshields are quacked.

20. Why did the duck cross the road?
He was tied to the chicken.

21. What did the duck say to the banker?
“My bill is bigger than yours.”

22. What did the cow tell the duck when she heard she won the lottery?
“You lucky duck!”

24. What do ducks eat with their soup?
Quackers.

25. What kind of TV shows do ducks watch?
Duckumenteries.

26. How can you tell rubber ducks apart?
You can’t because they look egg-xactly the same!

27. What do you get when you put four ducks in a box?
A box of quackers.

28. What happens when you say something funny to a duck?
It quacks up.

29. What is a duck’s favorite sea monster?
The quacken.

30. What kind of music does a rubber duck listen to?
Rub-a-dubstep!

31. Why did the duck cross the road?
Because there was a quack on the sidewalk.

32. What do you call it when it’s raining ducks and chickens?
Fowl weather.

34.If a duck says “Quack quack,” what says “Quick quick?”
A duck with hiccups.

36. What did Santa give the duck for Christmas?
A Christmas quacker!

37. What is a chick’s favorite drink?
Peepsi.

38. What language can a duck who converses with geese speak fluently?
Portu-geese.

39. What do you call a clever duck?
A wise quacker.

40. What did Detective Duck say to his partner?
“Let’s quack this case!”

41. Why did the duck sleep under the car?
Because he wanted to wake up oily.

43. If chickens wake up when the Rooster crows, then when do ducks wake?
At the quack of dawn.

44. What do you call a cow and two ducks?
Milk and quackers.

45. Who stole the shampoo bottle from the bathtub?
The robber ducky.

46. Where do tough ducks come from?
Hard-boiled eggs.

47. Which side of a duck has the most feathers?
The outside.

48. What does a duck wear to parties?
A duck-sedo.

49. Where do duck farts come from?
Their buttquacks.

50. What did mama duck say to the duckling who skipped school?
I demand an eggsplanation.

51. What does a duck say when it goes to the doctor?
Quack.

52. What do you call a bird that can fix anything?
Duck Tape.

53. Why did the duck cross the road? To show the chicken how to do it.

54. When is roast duck bad for your health?
When you’re the duck.

55. What’s the difference between a cranky two-year-old and a duckling?
One is a whiny toddler and the other is a tiny waddler.

57. Did you hear about the duck who thought he was a squirrel?
That was one tough nut to quack.

58. Why do ducks check the news? For the feather forecast.

59. What did the duck say to the spider? “Why don’t you have webbed feet?”

60. What do ducks say when people throw things at them?
“Time to duck!”

61. Why are ducks good at budgeting? They know how to handle the bills!

62. Why do ducks make good detectives?
Because they always quack the case!

63. What did the duck say when he dropped the dishes?
I hope I didn’t quack any!

64. What do you call a rude duck?
A duck with a quackitude.

Puns and One Liners About Ducks 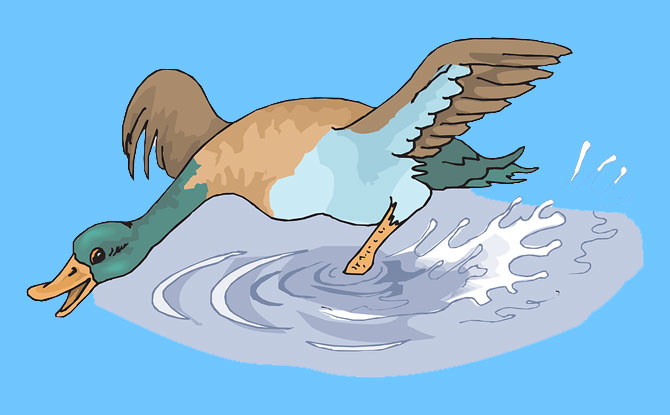 How many puns can you think of with the word “duck”? Here are a few puns and one liners about ducks for a quack laugh.

66. At the mall today I saw a toddler gnawing on a small rubber duck.
I asked him if it tasted like quackers.

67. Two ducks are walking down the road when one says to the other, “Quack”.
The other replies, “I’m going as quack as I can!”

69. A duck and a man are walking down the road together. All of a sudden, the man notices a low-flying plane heading straight for them! The man screams out “DUCK!” to which the duck looks back at him with a confused face and yells “MAN!”

71. Two funny ducks were swimming in a pond. One of them said “Quack quack.”
Then the other said, “Hey, I was about to say that!”

72. Two cows were chatting over the fence between their fields.
The first cow said, “I tell you, this mad-cow-disease is really pretty scary. They say it’s spreading fast; I heard it hit some cows down on the farm down the road.”
The other cow replied, “I ain’t worried, it won’t affect us ducks.”

73. Did you hear about the duck who received terrible medical treatment at the hospital?
He saw a real quack.