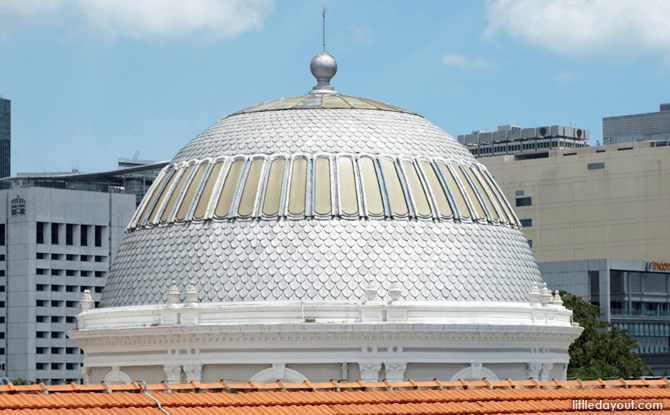 The National Museum of Singapore has a long history.

It can trace its roots to as far back as four years of Raffles’ landing in Singapore. However, it would take several decades more before an actual museum collection would be established. Nowadays, the National Museum of Singapore is most often associated with its grand neo-Palladian building at Stamford Road.

The building was officially opened in 1887. With a history as long as this, if only its walls could speak, what tales they would tell. However, since they don’t, here are some interesting things about National Museum of Singapore that you may not have otherwise known about.

Interesting Things To Know about National Museum of Singapore

Librarian or Curator – Which Came First?

On 22 January 1845, the subscription-based Singapore Library opened. In 1849, it received a donation of two ancient gold coins from Temenggong Ibrahim of Johor. This started off the Library’s museum collection. As its collection grew, the institution became known as the Singapore Library and Museum. This eventually came under the purview of the colonial government in 1874 and was renamed the Raffles Library and Museum.

A dedicated building to house the library and museum was opened along Stamford Road in 1887. This is the building that we now recognise as the National Museum of Singapore today.

Eventually, it was only in 1955 that the museum and the library finally parted ways administratively. The library moved to its own building next door to the museum in 1960.

The museum has gone through several name changes. These reflect its changing roles over the course of its history.

It was first known as the Raffles Library and Museum under the colonial government.

During the Japanese occupation of Singapore, it was renamed Syonan Hakubutsu Kan or the Syonan Museum.

At the end of the war, the institution’s name reverted to Raffles Library and Museum.

After Singapore gained self-government in 1959, the museum was renamed National Museum in 1960 as a way to indicate a break from the colonial past. The institution came under the auspices of the Ministry of Culture.

It remained the National Museum until 1993 when the National Heritage Board was formed. It was then renamed the Singapore History Museum.

In 2006, after $132 million renovation that required the museum to shift to temporary premises at Riverside Point shopping mall, the museum returned to its Stamford Road home and was renamed National Museum of Singapore.

Unicorns at the Museum 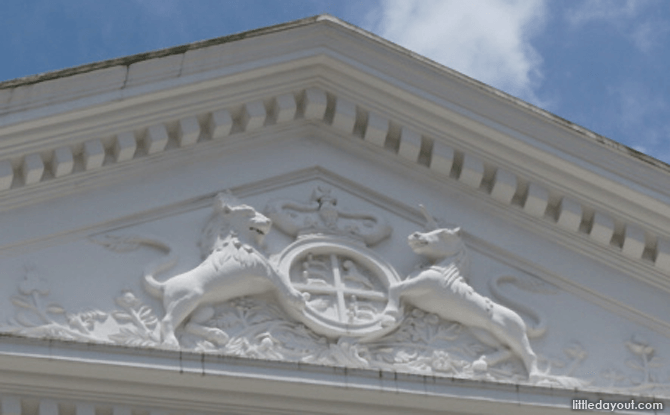 Look closely at the triangular pediments at the National Museum of Singapore’s exterior and you will be able to spot unicorns on the façade. These mythical creatures are found supporting Queen Victoria’s Coat of Arms and represent Scotland.

When the building was opened in 1887, Singapore was still part of the British empire. 1887 was also the year of Queen Victoria’s Golden Jubilee, in other words, her fiftieth year on the throne, explaining why her crests adorn the building.

Today, only three of the four Coat of Arms on the National Museum of Singapore are original. One of them facing the rear was damaged and had to be recreated by artisans from India.

Sanctuary During The War

The museum emerged relatively unscathed from World War II. This was not purely by chance as many other institutions in occupied territories had their collections looted and destroyed.

This was in part due to a Professor Hidezo Tanakadate who was sent by Emperor Hirohito to do a survey of scientific institutions in the region. There is a story told about how after the fall of Singapore to the Japanese, he pasted “Do Not Enter” signs on the Stamford Road building to discourage the Japanese military from seizing it.

What spurred him to do this act, even though he did not have proper military authority to do so, was a chance encounter he had with E.J.H. Corner, Assistant Director of the Botanic Gardens. At the meeting, Corner had passed him a formal note from Governor Shenton Thomas requesting for the scientific and historical collections in the museum to be preserved for their intrinsic value. This led to the Professor’s actions to help preserve the museum.

During the Japanese Occupation period, Marquis Yoshichika Tokugawa was appointed President of the Museum and Gardens. As a relative of the Emperor, Tokugawa’s appointment also brought some security to the museum and its collections. 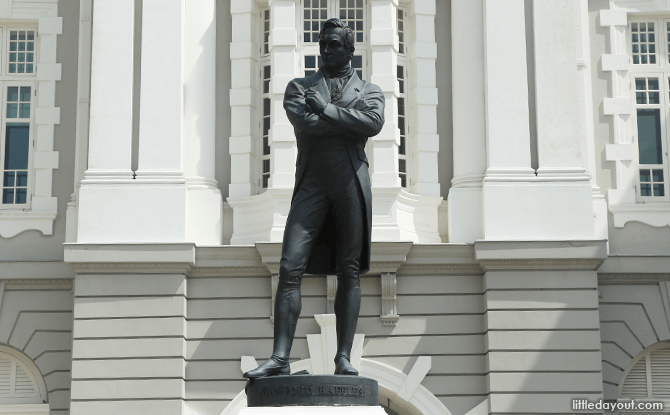 In fact, the statute of Raffles which stands outside the Victoria Theatre and Concert Hall was brought to the museum for safekeeping during the war. Thanks to the sanctuary provided by the museum, the statue is still around today.

For much of history, the predecessors of National Museum of Singapore focused on natural history. It had animal specimens collected from the region for scientific research.

Many older visitors will remember the bones of an Indian Fin Whale on display at the top of the stairs at the National Museum of Singapore.

By the late 1970s, the National Museum had firmly established its role as a place that focused on local history and where people could reflect on their roots. This is a role it fulfils till today.

So, what became of the Raffles Library and Museum’s original natural history collection? It was handed over to the National University of Singapore and can be viewed at the Lee Kong Chian Natural History Museum. 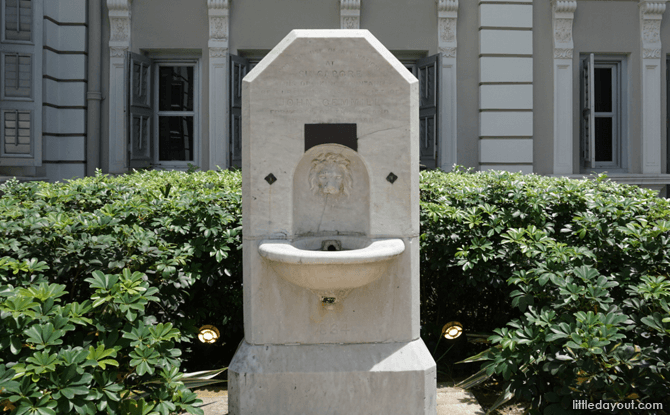 Tucked away in a courtyard at the National Museum of Singapore is the Gemmil Fountain. It is Singapore’s oldest public drinking fountain and was donated by banker John Gemmil in 1864 as a parting gift before he left the island. The Gemmil Fountain used to stand at Commercial Square (now known as Raffles Place), before being moved to Empress Place and eventually to the National Museum in 1967.

If you ever have the chance to visit the National Museum of Singapore’s Gallery Theatre, you will notice a wall made of red bricks. This wall of 16,720 bricks pays tribute to the former National Library building located along Stamford Road. The building was demolished in 2004 and the Gallery Theatre now sites on the location of its old car park.

The information in this article is based on the book, Dome in the City: The Story of the National Museum of Singapore.