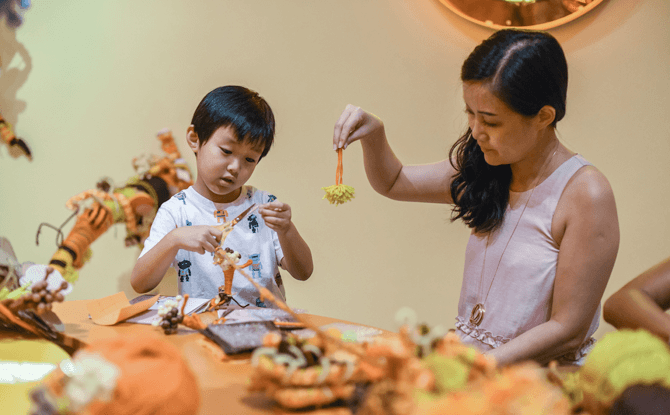 Imaginarium is one of  Singapore Art Museum’s best-loved exhibitions. This year, Imaginarium 2017 promises to continue that streak with an exciting exhibition that reflects on the Earth’s marvels and environments.

Imaginarium 2017 is titled To the End of the Earth and is the seventh in the contemporary art exhibition series geared toward families and children.

Ms. Tan Siuli, Curatorial Co-Head, Singapore Art Museum, said, “Through the exhibition and accompanying programmes, we at the Singapore Art Museum hope that our visitors will experience the powerful potential of contemporary art to inspire and to engage, making room in our lives for play as well as for reflection.”

Here are 10 thing you need to know about Imaginarium 2017 at the Singapore Art Museum’s SAM at 8Q and how it will take you to the ends of the Earth.

1. Imaginarium 2017 starts down to earth and ends in a dream

There are a total of nine art installations at To the Ends of the Earth. The first installation on the ground floor, Lie of the Land, is made out of two REAL bombs. They have of course been defused and are now repurposed as planters. The work reflects the down-to-earth realities faced by people in Laos where the artist is from.

The work at the top floor of the exhibition, Floating Mountain by Thai artist Unchalee Anantawat, is the exact opposite of Lie of the Land. It is a whimsical piece inspired by a dream she had.

These two works have been deliberately positioned at the start and end of the exhibition to bookend Imaginarium 2017, underscoring how our world can stretch from reality to dreamscapes.

2. Be sure to pick up an Imaginarium Adventure Kit and Ranger’s Handbook

Imagine a visit to Imaginarium 2017 (pardon the pun) as an expedition to discover the ends of the earth. Before you embark on your adventure, get an Imaginarium Adventure Kit from the SAM at 8Q front desk.

The Imaginarium Adventure Kit consists of a Ranger’s Handbook, magical four-colour pencils and a set of binoculars for the kids. The items are either available individually at $2 each or as a kit for $5.

The Ranger’s Handbook is a handy activity booklet that guides you through the To the End of the Earth exhibition and its artworks. It includes activity suggestions, along with sketching and colouring exercises.

3. You can be part of Imaginarium 2017 without even being there

One highly-interactive exhibition at Imaginarium 2017 is Vietnamese artist UuDam Tran Nguyen’s LICENSE 2 DRAW. At the exhibit, YOU become the artist and can take control of a robotic drawing machine to sketch out lines on a blank “canvas”.

The exhibit harnesses the power of the Internet and allows people to control the robotic drawing machine from an app. You can even download the app (search LICENSE 2 DRAW) and contribute to the art work without even being at SAM at 8Q.

4. Put your ear to the floorboards to hear Another Island

Created by Thai artist Nipan Oranniwesna, Another Island pays tribute to the tiny island of Singapore with 598 miniscule photographs of Singapore. These have been encased in resin and set into the floor boards of the exhibit. Be prepared to get on your hands and knees to squint at the photographs. They are vignettes of urban and natural landscapes from past and present Singapore.

But that’s not all. If you listen closely, you may also be to hear the familiar sounds of every day life in Singapore, such as the sound of MRT trains, coming from the exhibit.

5. Real mushrooms are springing up everywhere – keep a look out for them but don’t touch

Singaporean Calvin Pang’s Imaginarium 2017 work, Where am I, features clusters of mushrooms hidden around the SAM at 8Q building. The title of the work is a reference to what the mushrooms must be wondering (that is, if they could think).

It is a fun work that invites you to keep an eye out for seven colourful clusters of mushrooms (the key word here being clusters, not just a single mushroom) as you move around the former Catholic High building.

And in case you are wondering, the mushrooms are REAL white beech mushrooms. After they were dried, Calvin painted them in vivid colours and sprouted up this whimsical installation.

Admire them and, after doing so, leave them where they are for others to admire them too.

6. Be prepared to trek through an indoor tropical rainforest

Another Singaporean artist exhibiting at Imaginarium 2017 is Mary Bernadette Lee. Her installation, Wanderland is intended to remind visitors of the natural world and experiences such as walking through a tropical rainforest or strolling through the park.

See if you can spot bulbar hangings, textile birds flapping in the air and little bells chiming out the sounds of nature at the exhibit. This is a highly tactile installation at Imaginarium: To the Ends of the Earth and you are sure to enjoy your wander through it.

Need to take a breather? Head to the Moving Image Gallery on level 2. The total run time of the movies here is 42 minutes. In those 42 minutes, you can watch six shows including An Object at Rest by Seth Boyden, Pale Blue Dot, which won a Silver Award at the Crowbar Awards 2016, by Chin Li Zhi, animated film Way of Giants by Alois Di Leo from Brazil, and others.

None of these films are longer than 12 minutes and the average length is around 5 minutes, making it an easy way to take a pause before exploring the rest of the To the Ends of the Earth exhibition.

Explore the contemporary art works at Imaginarium 2017 with your toddler at special parent-child art-making workshops. The Toddler Art Workshop are suitable for children between 18 months to three years old.

The workshops cost $35 for each toddler accompanied by an adult. Register through the Singapore Art Museum’s website, www.singaporeartmuseum.sg.

The sessions will take place at the following dates and times:

9. Book a family night at the Singapore Art Museum’s SAM at 8Q

Go on a special tour around SAM at 8Q after dark to explore the works at Imaginarium 2017: To the Ends of the Earth. Curators will be taking groups around the exhibits during this family-oriented tour which is suitable for children aged seven and above.

Tickets are available at $12 each from the Singapore Art Museum and SISTIC. Children must be accompanied by an adult.

10. Squeeze into a photo booth and say ‘Cheese!’

Having a physical photograph is such a novel idea nowadays. You can re-introduce the idea of an actual photograph to your kids at the SAM Photobooth on level one. For $2, squeeze everybody into the booth and say ‘Cheese!’ before heading off from Imaginarium 2017!

Imaginarium: The Ends of the Earth at Singapore Art Museum’s SAM at 8Q

RELATED: Find out more about the nine exhibits you can see at Imaginarim: To the Ends of the Earth