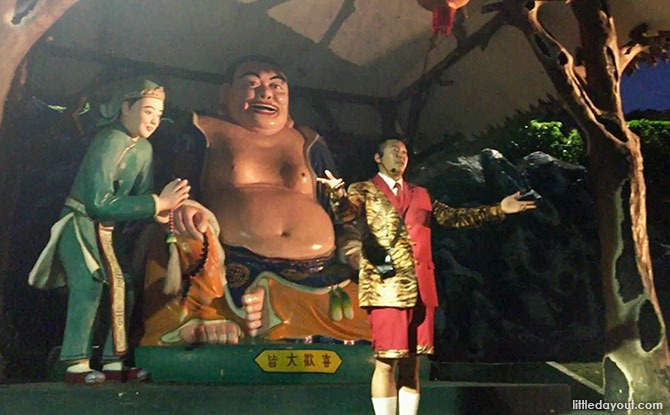 “Come! Follow Me!” urged the Tiger Balm King and millionaire philanthropist creator of Haw Par Villa himself, Aw Boon Haw. And so we were compelled to follow the wide-eyed entrepreneur down the red brick road into the realm of the Underworld, myths and legends as part of The Secret Life Of Haw Par Villa. It also helped that he was played by musical theatre stalwart Benjamin Chow with the amazing voice and snappy wit.

Haw Par Villa was built in 1937 by Aw Boon Haw (meaning ‘gentle tiger’), whose love-hate relationship with his sibling Aw Boon Par (meaning ‘gentle leopard’) frames the backstory of this performance tour. The 8.5-hectare Asian cultural park, the last of its kind in the world, was formerly known as Tiger Balm Garden since its founder was also the marketing guru of Tiger Balm, the medicated ointment we grew up with.

A Welcome by the King 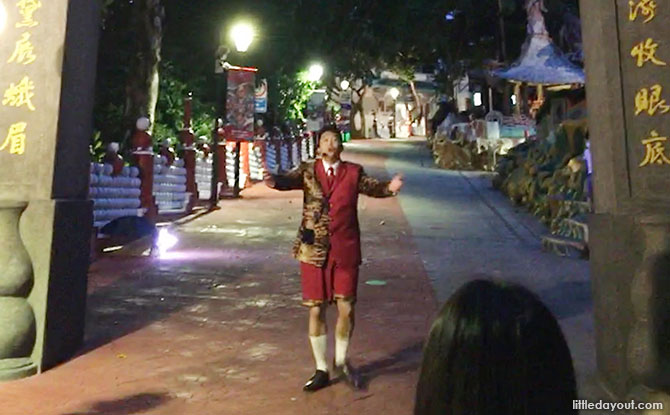 As the Tiger Balm King greeted the audience at the gate with a rousing song and dance item, we entered with an open mind and soon learnt that this was no walk in the park!

When the sun goes down and the weather becomes less balmy, the 84-year-old theme park certainly felt very different at night. But then again, it has been years since we entered this place as a kid and vaguely recalled what it was like since.

Throughout the 100-minute theatrical tour (and in safely distanced groups of five), we were taken through the park’s various dioramas and exhibits, some bleak and others illuminated, such as lakes and caves with flickering wavy lighting design to evoke glistening running water.

The Realm of the Dead 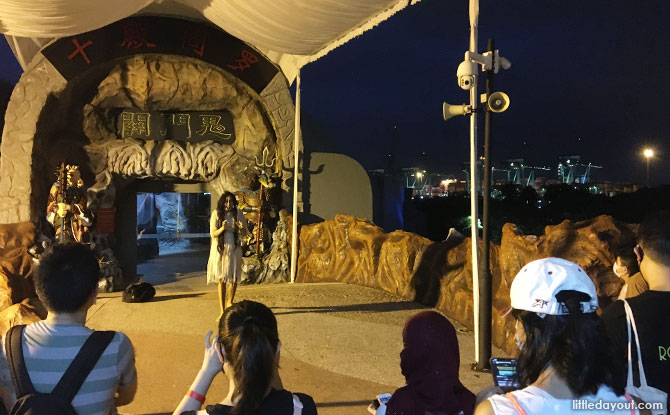 The road first took us to Hell. Ushered by Putu the wretched hysterical ghost (played by Nadya Zaheer) through the Ten Courts of Hell inspired by Chinese folklore, it was novel walking through Hell’s Museum since years ago the only way in and through was on a tram ride!

Within the cavern was a macabre series of miniature statues dramatising scenes of the afterlife, mostly eternal punishments meted out to condemned souls based on their past vices of being hooked on money, greed, power and other indulgences.

The visit to the fearsome Ten Courts of Hell, with its vividly lighted frozen tableau, was a grisly gory grim narrative about justice and retribution, starting with the first judgement Court of King Qinguang.

It was followed by the Courts of Kings Chujiang, Songdi, Wuguan, Yanluo, Biancheng, Taishan, Dushi and Pingdeng, the greedy, wicked, crooks, murderers, cheats, liars and unfilial ingrates were tortured by drowning in lava pits or hot oil, chaining to burning pillars, crushing by mortars, piercing by mounds of spikes, and dismemberment on racks and so forth, executed by grotesque imps.

The souls then move on to the final Court of King Lunhui for their turn on the cycle of reincarnation.

Once through the chamber, we were invited to cross over the bridge to exit and the entire group escaped hurriedly!

Encounters with the Eternals 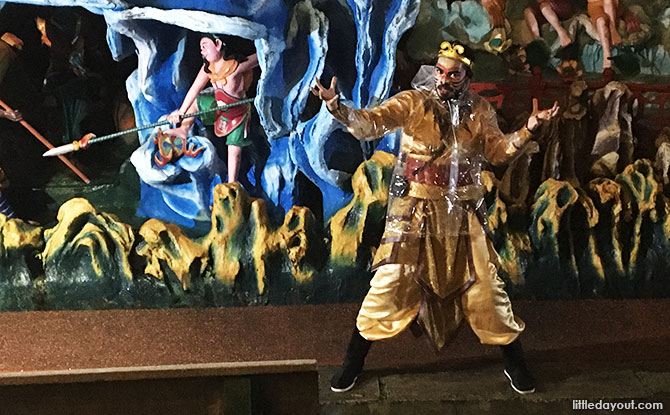 We next met two quirky immortal beings from Chinese mythology along the way who engaged the audience with their surreal stories and philosophical perspectives. 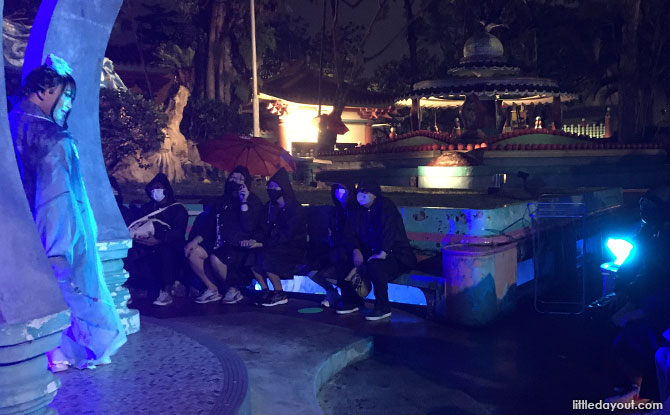 These were played by Lan Caihe (Benjamin Lye), one of the Eight Immortals, and the Monkey King or Sun Wukong (Fahim Murshed).

The tour resumed after the rain subsided, led by the Tiger Balm King who remained a standout act without missing a beat. Garbed in black hooded raincoats provided by the organisers, we felt like a secret society of masked druids in the dark as he guided us ably around the sprawling space!

The Game is Afoot 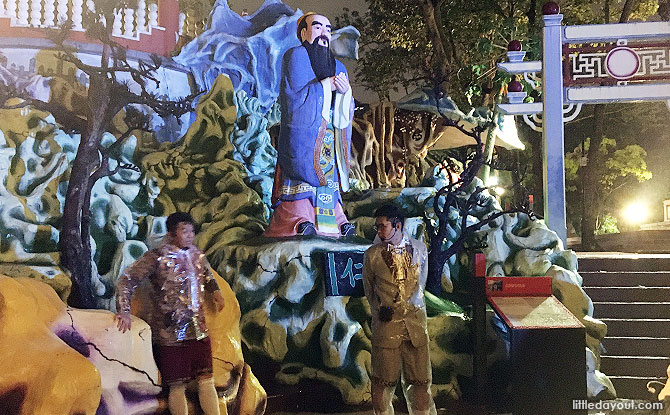 As nightfall turned Haw Par Villa into an unearthly backdrop, the two brothers led us around the park for some action, ranging from a treasure hunt around the river lake of the legendary sage Jiang Zi Ya, thinking fast and furiously to identify Confucius Sayings, to voting for or against vices!

While the transitions between each different character’s segment could have been more smooth, perhaps this was deliberate to show their intention to hijack the Tiger Balm King’s tour as the premise of the production.

Roaming the park at night to uncover a hidden history was certainly an experience. It was an informative journey to hell as well as the distant past and myths, coupled with the historical titbits thrown into the overarching frame of the Haw Par brothers’ drama.

“The Secret Life of Haw Par Villa” is jointly presented by Strawberries, an experimental events company by a group of theatre practitioners who aim to “push art off the stage” and into the public consciousness, Patch and Punnet (a theatre collective) and Journeys (a pioneer in creative development of heritage sites).

Written and Directed by Krish Natarajan
Advisory: Some Disturbing Content
Performance Run: 7 January to 26 February 2022 with two timings every Friday & Saturday: 7 pm & 9.30 pm.
Duration: Approximately 1 hour 40 minutes (without intermission)
Tickets are available now for sale at $59 for adults and $49 for child under 12 here.

80 Boat Jokes To Make You Laugh For Shore