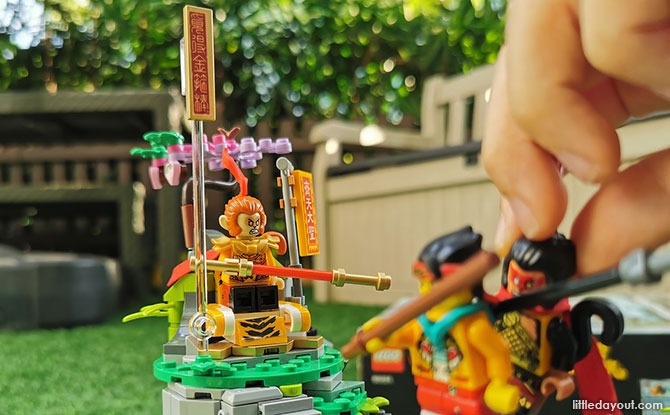 The legendary Monkey King is known by many as a Chinese classic. We might have seen the movies, drama serials, read books and comics about Monkey King. LEGO has released the Monkie Kid The Legendary Flower Fruit Mountain set which is a grand tribute to this legend.

Background to the Legend of Monkey King 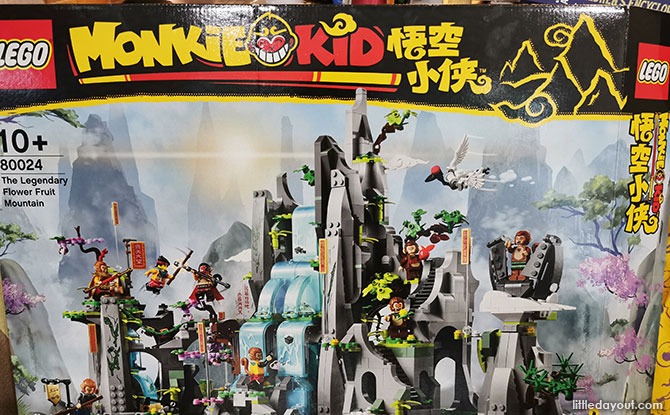 For those who are not acquainted with this Monkey deity, Monkey King also known as 孙悟空 – is the infamous primate born out of a rock, lived on Flower Fruit Mountain claiming to be The King. With one somersault, Monkey King can travel tens of thousands of miles! This extremely gifted intelligent monkey even trespassed into the celestial realm, wreaked havoc by eating lots of longevity peaches, went into the ocean and stole Dragon King’s crown treasure and more. You get the drift.

Would such defiance continue? That’s where “Journey to the West” takes prominence. Since the invincible Monkey King could not be subdued, the celestial emperor seeks help from Buddha who imprisons him under a mountain for five hundred years. He is then rescued by the Tang Monk, who gets him to escorthim to the West to get the Sutras.

With such an riveting tale as the backdrop, the Flower Fruit Mountain promises tons of fun for builders.

A Jaw-dropping Set that Honours the Tale of Monkey King 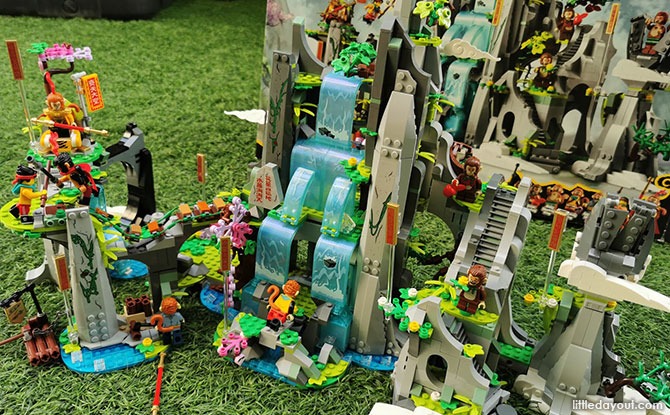 Even before unboxing the set, all eyes were mesmerised by the packaging of the LEGO Flower Fruit Mountain set. It’s a large set with 1949 pieces and three building manuals! With the pictures illustrating the final build, the children were eager to work on the impressive set straightaway.

As this set is dedicated to the story of Monkey King, every section tells a different part of his life story. There are also intricately details of the set which might be appreciated by the adults, rather than the children. There are also 8 minifigures showing the different life stages he has been through for the family to re-enact.

As mentioned, this set has 1949 pieces, much more than the Dronecopter set. The Flower Fruit Mountain is more than a mere mountain, it has secret staircases, a swivel throne for Monkey King, a secret waterfall with an opening, a mysterious rock that opens and a rotating platform for martial arts practice. Even though the mountain isn’t life-sized, it has the magic from the mystical mountain. Now if only we could transform into minifig sized humans. 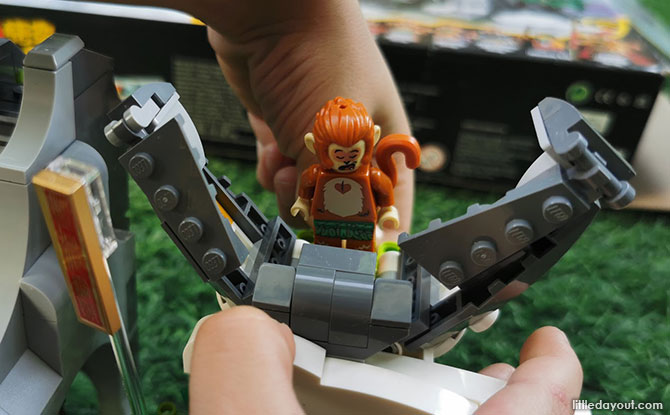 There are six sections within the Flower Fruit Mountain set, each marked by traditional Chinese words as the title. For those who want to decipher the Chinese text, you may want to ask your grandparents for help as the words are in traditional Chinese. The first is about the birth of Monkey King where the rock or the stone egg cracks open to reveal the baby monkey. This was a cool feature as unlocking a mechanism opens up the rock.

Two of the monkey figures are a pair of siblings and one with an apple. This section should be dedicated to the life the monkeys happily frolicking at the mountain, and paradise to them. I like how little touches like Peach blossom, apple trees, wispy celestial clouds are included in the landscape. 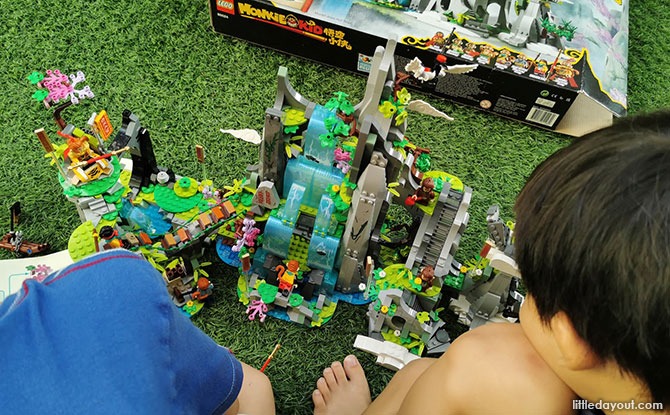 The key section would be the huge waterfall that forms the façade and the secret entrance to the monkeys’ lair. The waterfall “opens” to unveil the cave behind. Just push down the middle rock for the gateway to open. I thought this was a really clever design, and that’s not all! 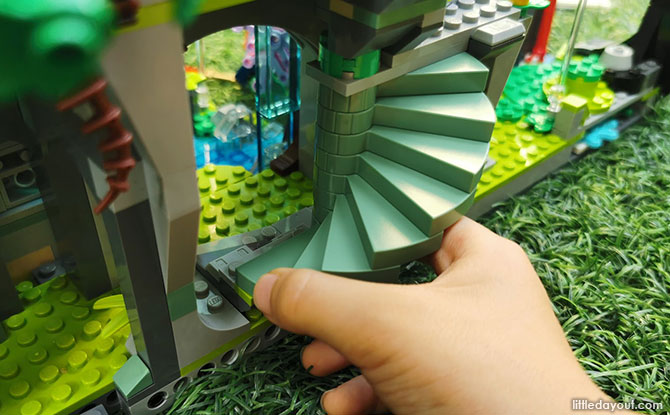 Behind the waterfall is a winding staircase which can be hidden! It seems like a secret stairway leading to the second level where there is a rock engraved with a couplet about Flower Fruit mountain. This could be a great way to develop your child’s interest in Mandarin.

The next part of the story is about Monkey King as an apprentice when seeking deityhood. Monkey King decided to sail away from his kingdom on a handmade bamboo raft to seek an Immortal in order to conquer death. There are also some wooden poles to depict the crafting process. 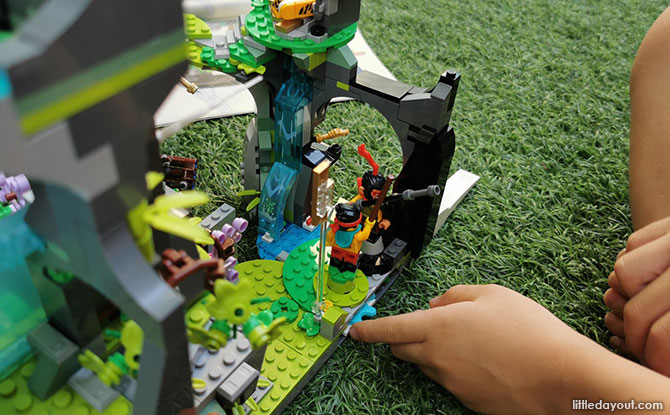 The fifth section is about the Evil Macaque – yes there’s an evil doppelganger! He visits the mountain pretending to be Monkey King to fight with Monkie Kid. Here, you can use the rotating platforms to simulate a battle between the minifigs by using the gears and spinning them.

Finally, Monkey King ascents to his throne. The section is aptly titled “Golden Rod Found” as the golden rod also known as 金箍棒 is the ultimate weapon of Monkey King. Upon his “enlightenment”, he ascends his ultra-cool swivel throne. 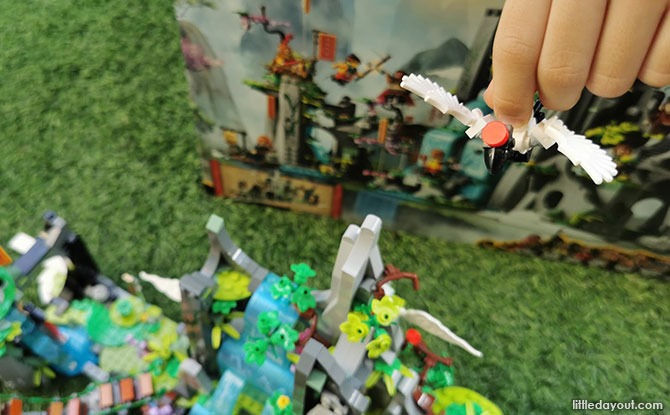 I think this LEGO Flower Fruit Mountain set is power packed with plenty of features and play opportunities. I appreciated the little details of the set – the Chinese inspired designs including dragonheads, bonsai inspired greenery, little nooks for the monkeys to play at and even a beautiful red-crowned crane.  It makes the legend of Monkey King come to life and I’d highly recommend this set for its play potential.

Furthermore, it’s an excellent set to play with all members of the family! Monkey King would be pleased with this set that celebrates his stories vividly.