Opening 15 February 2022, 80 years to the day that the British surrendered Singapore to the Japanese during World War II, New Light on an Old Tale: 80th Anniversary of the Fall of Singapore is an exhibition which showcases many rare artefacts, on display for the first time.

Many of the artefacts come from the collectors’ personal collections and are being publicly exhibited for the first time. The artefacts have been complemented by oral history accounts and images from the Archives’ collection. The New Light On An Old Tale exhibition occupies the atrium outside the Oldham Theatre. It tells the narrative of how Japan and Britain were once allies during the early 20th century before the clouds of war started to gather in the 1930s. 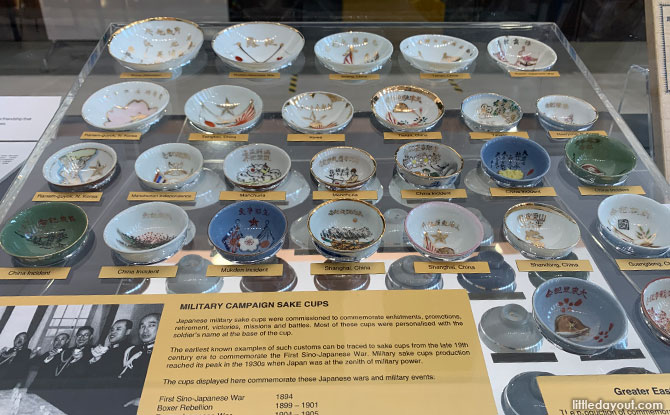 Among the artefacts on display are rows of sake cups, inscribed with the names of soldiers underneath. These commemorate various campaigns that Japan fought. Ironically, there is one which commemorates the Boxer Rebellion Eight Nation Alliance where Japan and Britain were part of the same coalition.

War On The Horizon As war looked more inevitable, the British went about mustering up a local force. There is a wooden plaque of the Singapore Volunteer Rifle Corps, a helmet used by an Air Raid Precaution warden and photos of low cost air raid shelter designs.

Fall Of The Fortress

This section sheds light on the fall of Singapore. One of the most poignant artefacts are the personal effects of Leslie James Jackson who died on the HMS Repulse when it was sunk on 10 December 1941. He was just 21 years old.

In another case, there is a medal issued by Adolf Hitler to commemorate the capture of Singapore. There is also information on how General Yamashita, who was known as the Tiger of Malaya, almost didn’t take up command of the invading army.

Masters Of Our Fate 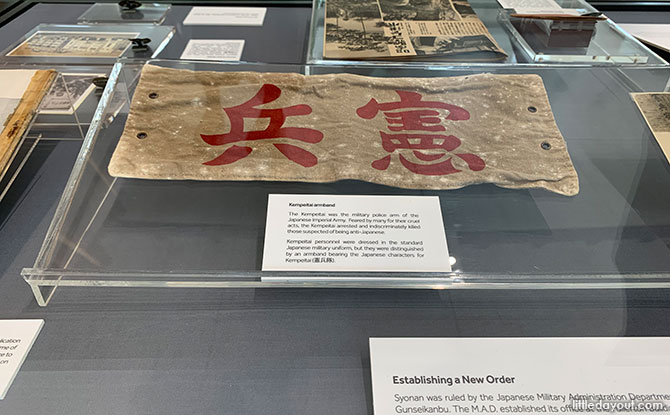 An armband of the Kempeitai or Japanese Imperial Army Military Police is symbolic of the atrocities and fear that the population of Singapore lived with under Japanese occupation. It is one of many artefacts that show how the Japanese occupiers ruled the country. 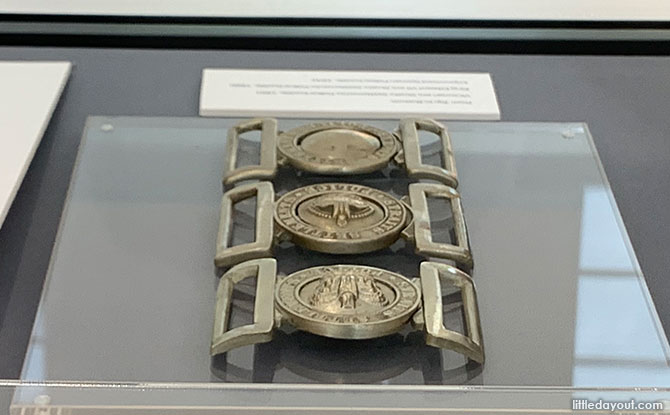 But there are other interesting artefacts too. There are British belt buckles which were allowed to be used by during Occupation because of material shortages, but ordered to be polished down so that British-related insignias were no longer visible. And clay coins that were planned to go into circulation in Japan because of a lack of metal.

These provide a different look at the war and the Japanese Occupation.

New Light on an Old Tale: 80th Anniversary of the Fall of Singapore at National Archives Singapore 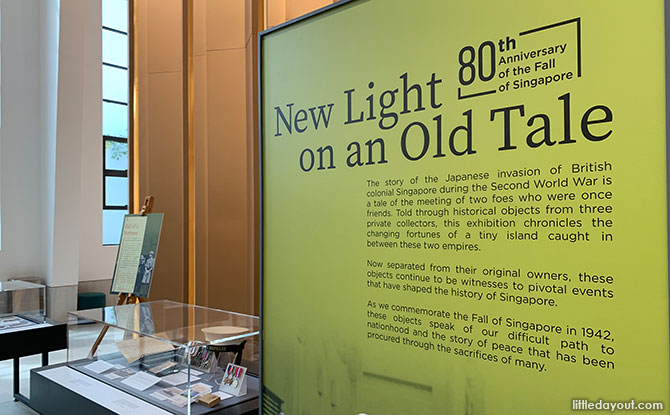 New Light on an Old Tale: 80th Anniversary of the Fall of Singapore is a significant exhibition, not because it is very large, but because it is a rare chance to view and connect with these artefacts from World War II. Together with the archival pictures and oral history accounts, the exhibition offers a somber reminder of those dark days.

In conjunction with the exhibition, there will be programmes that tell the stories of World War II and the Japanese Occupation of Singapore. This includes an “Archives Invites” talk in March by Mr Sng, one of the collectors, on some of the significant artefacts featured and the stories behind them. There will also be specially curated film screenings by the Asian Film Archive.

New Light on an Old Tale: 80th Anniversary of the Fall of Singapore will be at the National Archives Singapore building, Level 3 from 15 February to 30 June 2022.