Home Learn STEM Meeting Of The Planets: Saturn, Jupiter And The Moon In A Row... 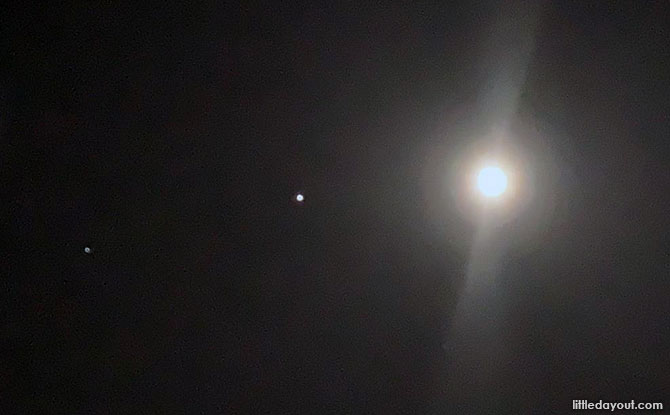 We normally think of the planets Saturn and Jupiter as being very far away (well they are) but if you look up into tonight’s sky, you can see view the moon, Jupiter and Saturn in alignment with the naked eye.

Moon, Jupiter and Saturn in Alignment 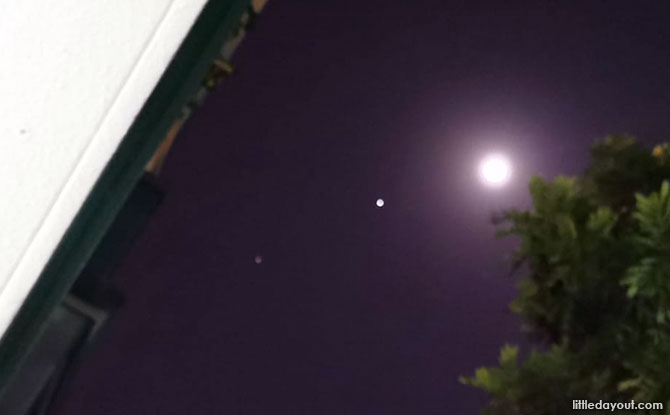 With clear skies, it is easy to spot the three celestial bodies. From the moon, you can spot Jupiter shining brightly and with a dimmer Saturn after that. You can tell them apart from the stars as they shine steadily and do not twinkle.

Here is a post about the Astronomical Society of Victoria about the conjunction (as viewed from the Southern Hemisphere).

In case you are wondering, Jupiter is currently 659.82 million kilometres away from Earth.

Saturn is currently a whopping 1.3722 billion kilometres from Earth.

The distance of the planets from the Earth changes as they are all on different elliptical paths around the sun.

Both Jupiter and Saturn are gas giants and made up mostly of hydrogen and helium. Jupiter is the largest planet in the solar system while Saturn is the second largest.

Saturn is about nine times wider than the diameter of Earth. It is also the farthest planet from Earth to have been discovered by the naked human eye. Galileo Galilei with the first person to observe Saturn with a telescope back in 1610.

Even though this conjunction of the planets is not really a rare occurrence, it is always amazing to be able to look out of our little blue planet and gaze into the solar system.

Another Jupiter-Saturn conjunction is expected on 21 December 2020 when the two planets will be at their closest since 1623!