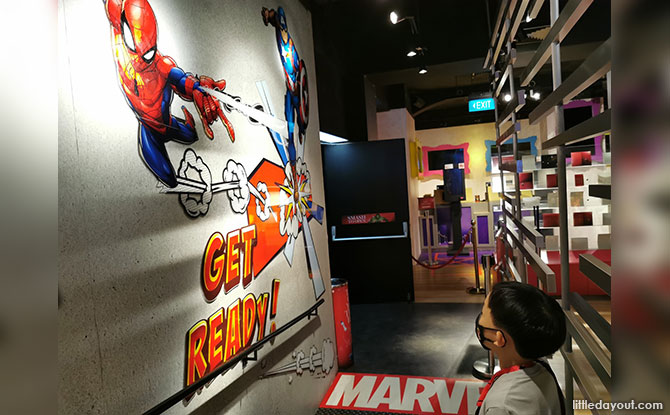 Where? At Madame Tussauds, Sentosa of course. Marvel fans will not want to miss this all new 4D movie experience included in the ticket to Madame Tussauds. Beginning 22 April, visitors will get a chance to complete their Marvel experience after posing with the wax figures by watching the very realistic Marvel Universe in 4D at the theatre.

It was my boys’ first movie on the Marvel Superheroes. (Are you horrified?) And it was a feast for their eyes and senses as they watched the heroes in their full glory.

Madame Tussauds Singapore will be the first in the world to debut the mini-movie. The movie in different variants will then be shown in Madame Tussauds around the world. What a privilege that we get it first! 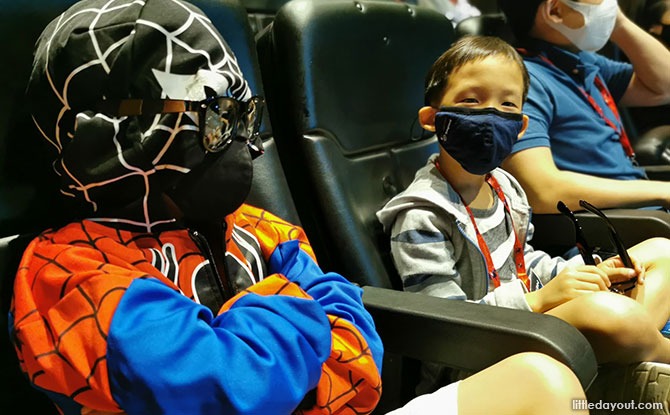 Obviously, the movie will be about the Avengers. There is one twist. Singapore is the battleground! Without giving too much away, the Avengers will have to do battle and try to save the day.

Teamwork is always what makes the Marvel superheroes such an entertaining bunch to watch. Spiderman’s egoistic quips, Groot’s repeating one-liners, Hulk’s lethal smash and the unique traits of every character work well to fight evil together – as one team. Hopefully this helped my children learn to work as a team and minimise the number of squabbles they have.

Never judge the book by its cover. Size matters, and I’m not just talking about the bigger the better. Before I give the plot away and let you in on spoilers, while the giants did have their moments – the size of the characters can be used as strengths rather than weaknesses. Speaking as a petite mum with two tiny boys would proclaim: good things come in small packages.

I’m usually not one to appreciate fight scenes, but watching it in 4D just redefines the experience. It was entertaining and too short (yes I want more!) to lose your attention even in seconds. Seeing expressions right in front of our eyes, feeling the squirts and pokes and tremors in the seat, feeling the brush of air as the superheroes whizzed past us was surreal.

High definition 4D was definitely befitting for the Avengers team. The richness of the colours, textures, emotions definitely was brought out vibrantly with the added dimensions of sound and sensation.

I also loved how the setting of the scene was somewhere familiar. And it ended with the unveiling of the figures of Antman and The Wasp with a special appearance by someone more important than the Avengers combined.

Look out for New Holograms of Antman and The Wasp, coming soon!

Visitors to Madame Tussauds can also look forward to seeing the new holograms of Antman and The Wasp which will be unveiled soon. How marvel-lous! Perhaps we can see all the characters gathered and assembled closer to home?

For more on Marvel Universe in 4D and how you can get tickets click here.