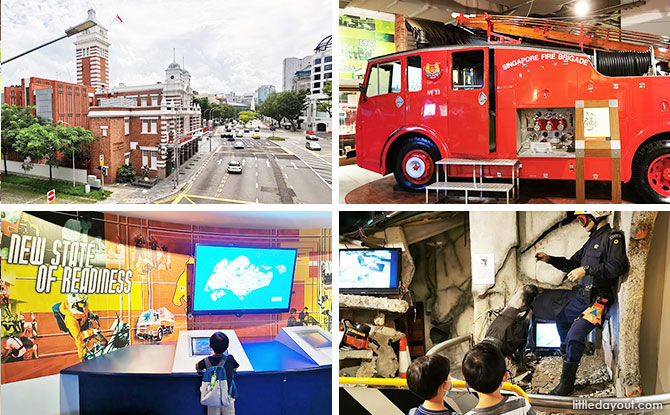 Booking an Appointment Online for Your Visit 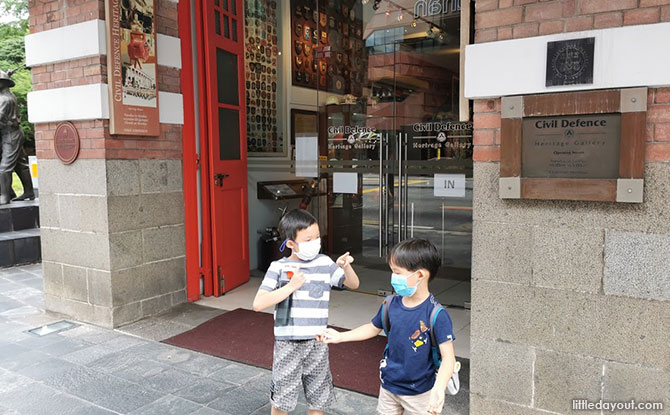 Under normal circumstances, the Civil Defence Heritage Museum & SCDF Emergency Preparedness Centreare open for walk in. However, at the momemtn, visits are limited to a maximum of fiver persons per timeslot. Visitors will need to make an appointment via the SCDF website ahead of time.

Each timeslot lasts for 45 minutes and the gallery will be disinfected before the next batch of visitors. Visits can be made daily except Monday.

All the new protocols  like scanning the Safe Entry codes, temperature taking, health declaration and sanitising of hands apply to the visitors. 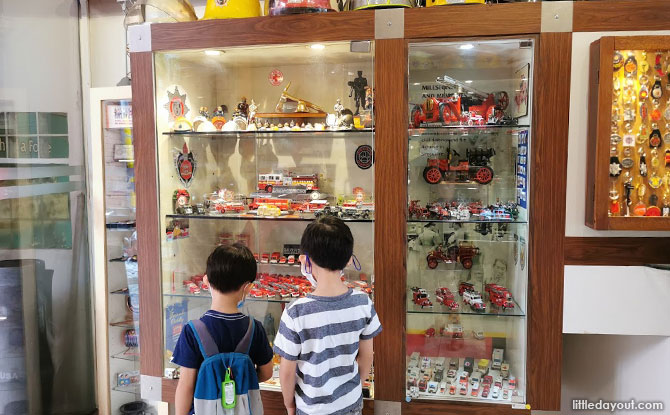 The lobby of the museum is a feast for the eyes with the display of helmets, memorabilia, miniature toys and badges of fire fighting services all over the world. 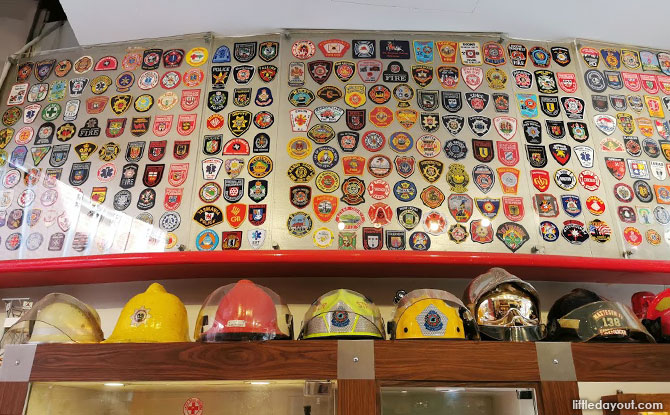 The children spent a good ten minutes just admiring the tiny fire trucks, ambulances, fire men, looking at how different helmets were (they were made of leather long ago!) and trying to spot different badges from different cities. See if you can spot the vintage sprinkler nozzles and the differences between the rescue vehicles.

The early years of Singapore’s colonial past saw much prosperity and migration causing a population boom. This led to many fire hazards yet no organised brigade to meet the need for skilled fire fighting. Fire fighting was frequently managed by the police, volunteers and even convicts. 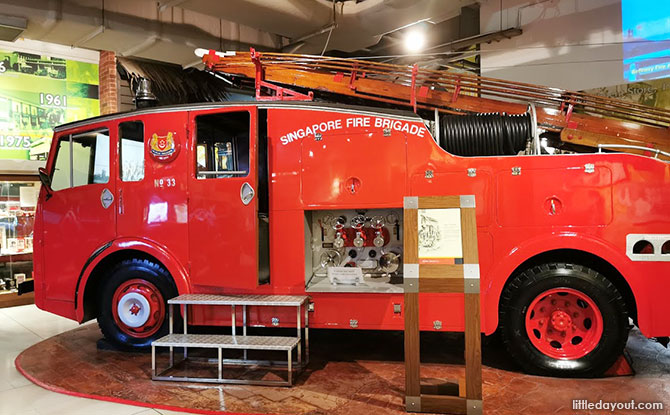 The first gallery of the museum is dedicated to the oldest fire engines used. On display is the first horse-powered fire engine. You can see the water tank that was used in rescue efforts. 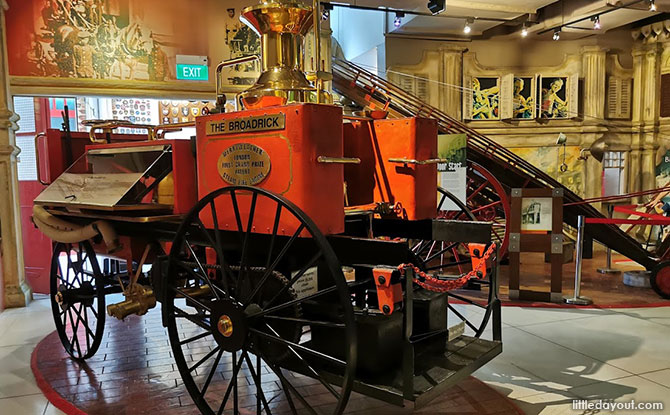 There is also a grand-looking steam-powered fire engine “The Broadrick” on display.

The ladders used in the past were also manually raised using pulleys. It definitely took much effort to put out fires and a lot of time seemed to be taken to travel to the spot and setting up the equipment. 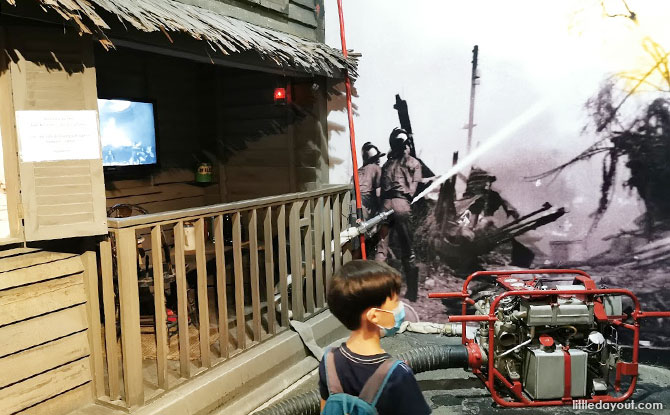 However, given the density of the population and housing built with wood – fires such as the Bukit Ho Swee fire ravaged the area. A scene of the fire-fighting effort during those perilous times was played on the screen to remind us of how challenging it was. 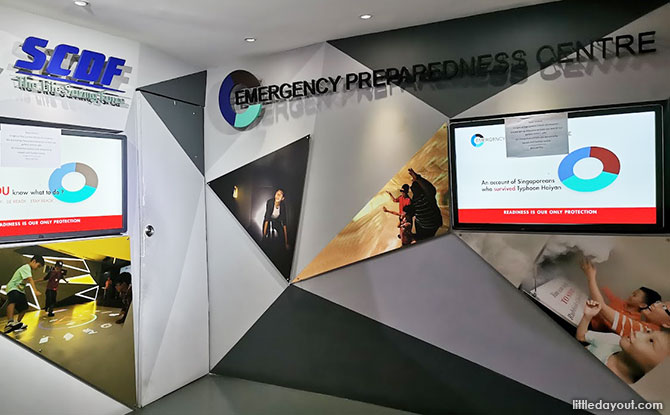 The second floor of the museum is the SCDF Emergency Preparedness Centre – a gallery that charts how the SCDF has grown to today’s scale and expertise. The SCDF consists of paramedics, Disaster Assistance and Rescue Team (DART) and Hazardous Materials Team (HazMat).

The interactive stations are all on the second floor. Unfortunately, because of the pandemic, the stations are all temporarily closed. While this can be a mood-dampener, we still managed to check out different stations. 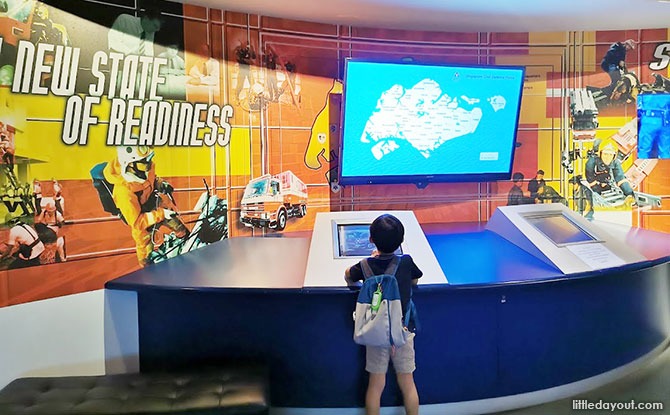 At the SCDF Emergency Preparedness Centre, children will be able to see the numbers of SCDF stations around Singapore, as well as its equipment or fleet of transport. One piece of equipment that we often seen – the Red Rhino is featured prominently. It allows fast and timely response to emergencies as explained in a video. 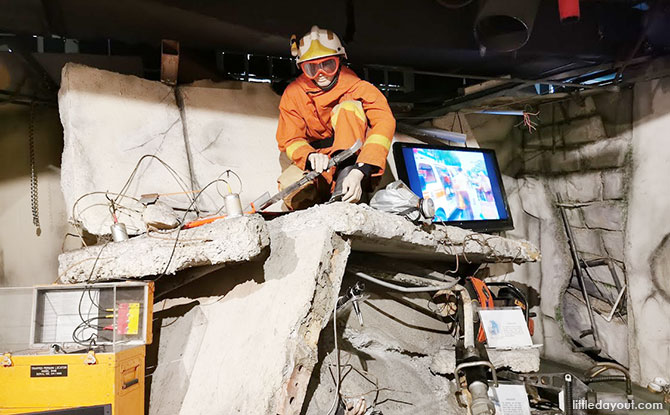 The more significant portion of this gallery is dedicated to the rescue efforts in disasters and emergencies. 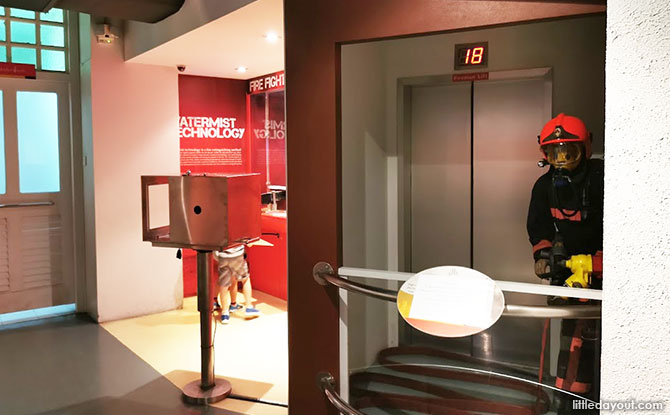 Apart from hearing the account of a survivor from Typhoon Hai Yan, there were also tools on display used for rescue efforts during earthquakes and collapsed buildings or structures. 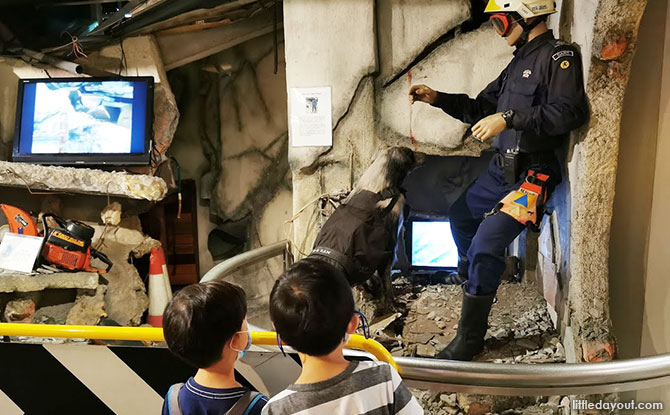 Tools such as power saws, spreaders to lift fallen concrete slabs, air bags can also be seen. We were quite amused by a barking rescue dog capable of using their keen sense of smell to assist the SCDF personnel. 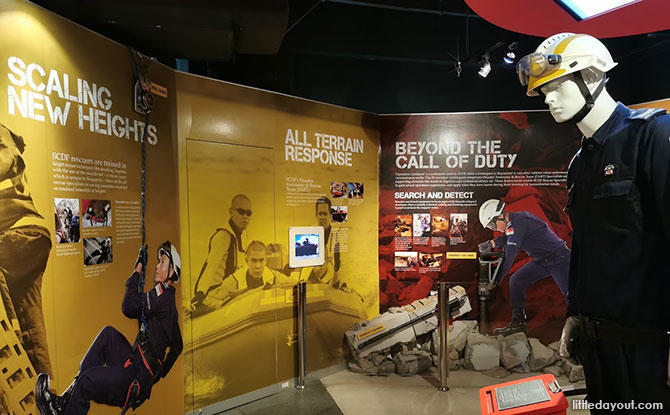 As mentioned earlier, many interactive stations are currently deactivated. These included a station using watergun to try out the watermist technology for fire fighting, to operate various equipment turning valves and trying out the fire-fighting suits. There was also a station for tracing of different vehicles.

Civil Defence Heritage Gallery – A Gem for Fans of SCDF 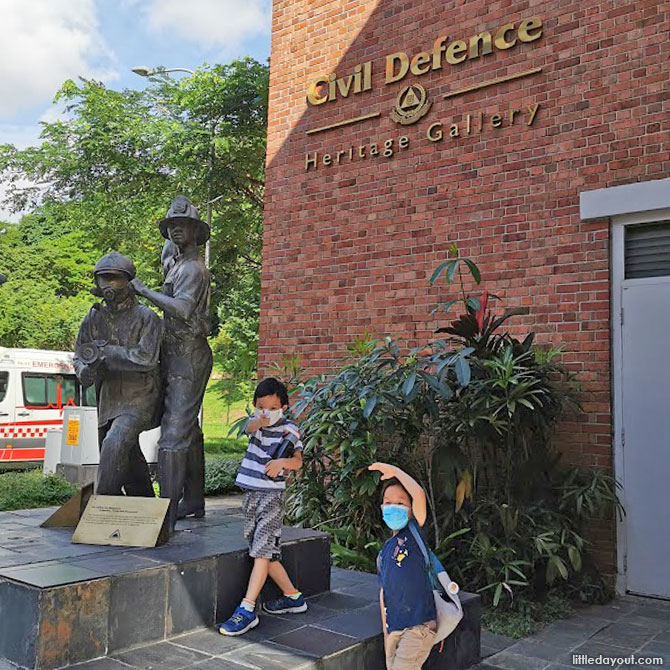 Despite the scaled down engagement, the Civil Defence Heritage Gallery is still a gem for fans of SCDF to visit. From history to current capabilities, there is much to learn about SCDF’s duties. It was also a reminder of how mutual help is essential amongst various countries during massive rescue efforts. The importance of our SCDF is showcased in the gallery, and definitely worth revisiting.