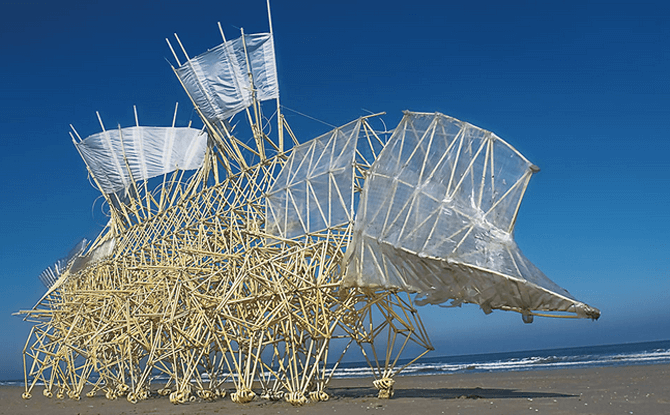 Dutch sculptor, Theo Jansen, has spent the last 28 years designing and building a series of wind-powered creatures called Strandbeests or ‘beach animals’. Jansen’s extraordinary creations, which he describes as “a new form of life”, are a true embodiment of art, science, engineering and performance.

In the spirit of Leonardo da Vinci, Jansen trained as a physicist, then became a painter, before focusing his attention on sculpture. He has applied his background in both art and science to create over 30 self-propelled Strandbeests that utilize wind power to walk in a startlingly lifelike fashion. Originally conceived as a solution to address the threat of flooding caused by rising sea levels, Jansen envisioned the Strandbeests as wind-powered creatures roaming the beaches, pushing and piling sand on the shore to form natural barriers.

Presented in four sections, the exhibition brings together 13 large-scale Strandbeests, from the most recent moving Strandbeests to ‘fossils’ of past beasts, accompanied by a comprehensive collection of films, artist sketches and prototypes. It starts by charting Jansen’s imaginative vision and the origin of Strandbeests, to unraveling the science behind the Strandbeests’ unique locomotion as well as the processes that have driven their evolution. It further explores how Jansen’s beach-walking creatures have dramatically advanced in form and function over the years, becoming more than the practical machines he originally intended, and instead evolving into a new species of man-made animals.

The exhibition concludes with a commissioned installation, Backyard Lab, by Singapore-based artist Isabelle Desjeux. Similar to Jansen, Desjeux’s work is an exploration into the process of creation using everyday objects through trial and error and experimentation.