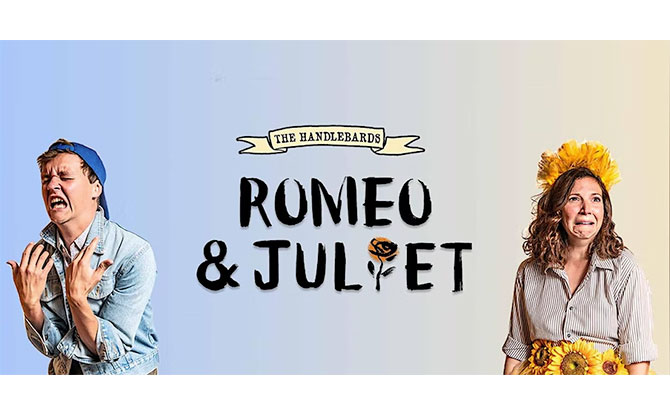 Described by none other than Sir Ian McKellen as “uproariously funny”, the HandleBards present Shakespeare’s plays as you’ve never seen them before – fast-paced, irreverent, and extremely funny.

In the city of Verona two wealthy families, the Montagues and the Capulets, have been enemies for a long time. Romeo Montague and his friend, Mercutio, gatecrash a Capulet party and Romeo meets Juliet Capulet. They fall in love marry in secret with the help of Friar Lawrence.

Romeo goes to celebrate his marriage with his friend Mercutio, but gets into a fight with Juliet’s cousin, Tybalt. Tybalt kills Mercutio and Romeo avenges his death by killing Tybalt. For this crime the Prince banishes Romeo from Verona.

Juliet’s father, Lord Capulet, decides she should marry Paris, a wealthy suitor. Juliet refuses and goes to Friar Lawrence where they come up with a plan for Romeo and Juliet to be together. Juliet will fake her death by drinking a potion which gives her the appearance of being dead and lie in a tomb waiting for Romeo to come so they can run away together.

Friar Lawrence sends a letter to Romeo outlining their plan, but Romeo doesn’t receive the letter and so thinks Juliet has died. He goes to Verona, sees Juliet in her tomb, and drinks real poison so he can be with Juliet in death. Juliet wakes up to discover Romeo dead and kills herself with his dagger.

Upon finding their children dead the Capulet and Montague families vow never to fight again.

Age guidance for children 8+ years
Free seating – doors open at 6 pm and the show will start at 6.30 pm

12 February 2023, 7 pm to 9.30 pm, Tanglin Club – performance in the Theatre with free seating. Please note there is no parking at the Tanglin Club for non-members. 5 Stevens Road Singapore, 257814