This National Day, 9 August 2021, is slightly different from other years in that there will only be a ceremonial parade held at The Float @ Marina Bay. However, there is some good news as there will a National Day Flypast 2021, something to lift the spirits as the Republic of Singapore Air Force’s helicopters fly the Singapore around our tiny island, and a flypast by F-15SG fighter jets too.

Fly Our Flag by Chinook Helicopters 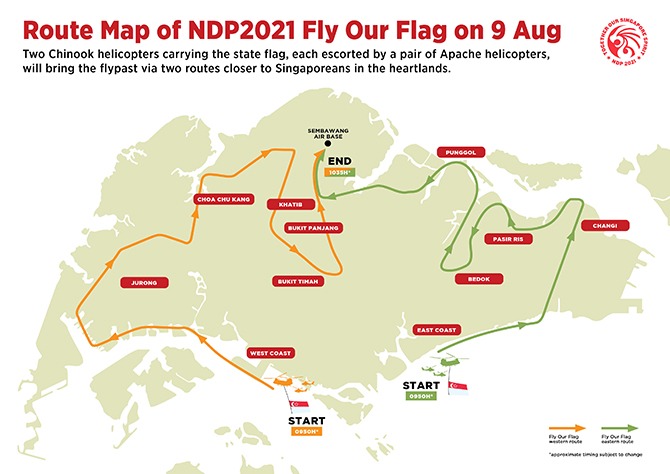 On 9 August 2021, following the ceremonial parade at the Float @ Marina Bay, two Chinook helicopters will fly across Singapore via two routes from around 9.50 am to 10.35 am. Each helicopter in the Fly Our Flag 2021 flypast will be escorted by a pair of AH-64 Apache helicopters. They will fly Singapore flag 1,000ft in the air.

This will bring the iconic flag flypast closer to Singaporeans in the heartlands, as the nation celebrates as one from our homes on 9 Aug 2021.

The Eastern Route will begin at the south of Singapore and will fly along the southeastern and northeastern coastlines of Singapore. It will pass by East Coast, Changi, Pasir Ris, Bedok, Punggol and Khatib.

The Western Route will begin at the same time. It will fly over the southwestern and northwestern areas of Singapore, passing by West Coast, Jurong, Bukit Panjang, Bukit Timah and Choa Chu Kang. 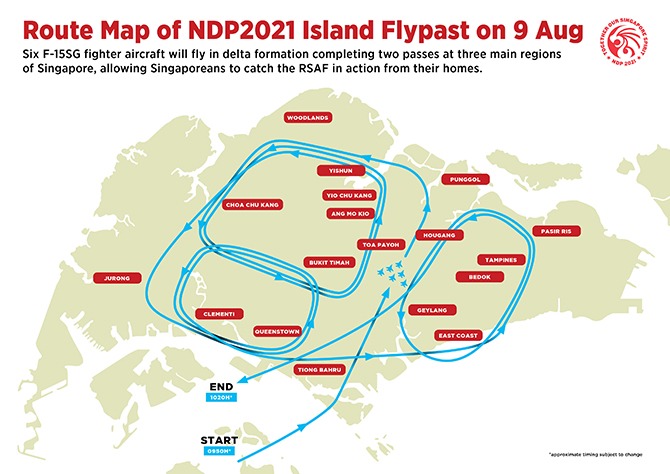 For the F-15SG Island Flypast, will be begin at the Float @ Marina Bay at around 9.50 am after the end of the ceremonial parade.

The RSAF F-15SG fighter aircraft will fly in a delta formation over Singapore’s heartlands at over 600km/h and at a height of 1,500ft.

The flypast will take around 30 minutes.

Let’s all enjoy the National Day 2021 flypasts safely from home!

READ: 5 Things to Know About the National Day Ceremonial Parade 2021