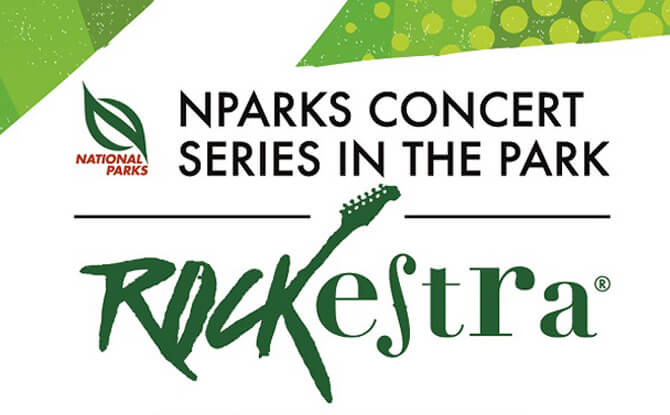 Park users and the local community can look forward to the sixth instalment of NParks Concert Series in the Park: Rockestra® at Fort Canning Park (Fort Canning Green) on 3 June 2017 from 6.30pm until late. Organised by the National Parks Board (NParks), the concert will feature a medley of golden hits from the 60s to the 90s performed by our local bands.

The audience can dine on delectable light bites while reminiscing the good old times with songs from yesteryears. Themed “Saturday Night Retro Fever”, the Rockestra® concert will feature more than 30 hits by the likes of Michael Jackson, Bananarama, Bee Gees, Beatles, Elvis Presley, and Queen by Dru Chen, Jack & Rai, Jive Talkin’, Joie Tan, Shagies and 53A. A newly formed band, The Durian Theory, will be making their debut at the Rockestra concert. The concert is proudly supported by Presenting Sponsor, Temasek, and will be hosted by Justin Misson, popularly known as Warrant Lum in the movie Ah Boys to Men 3: Frogmen.

The event starts from 6.30pm onwards till late.

Interested concert-goers can send in their song requests in advance by texting <Your Name>_<Song Title>_ <Name of Artiste> and <Dedication Message> to 77275 from now till 3 June 2017.

NParks will also be giving out limited prizes to concert-goers who are dressed in retro outfits or share pictures of their retro-themed picnic at the concert on their public Facebook, Instagram or Twitter account with the hashtag #nparksrockestra. Winners will be able to redeem their prize at the concert on 3 June.