Home Lifestyle Shopping LUMOS MOOD: Transform Your Room Into A Galaxy Of Stars 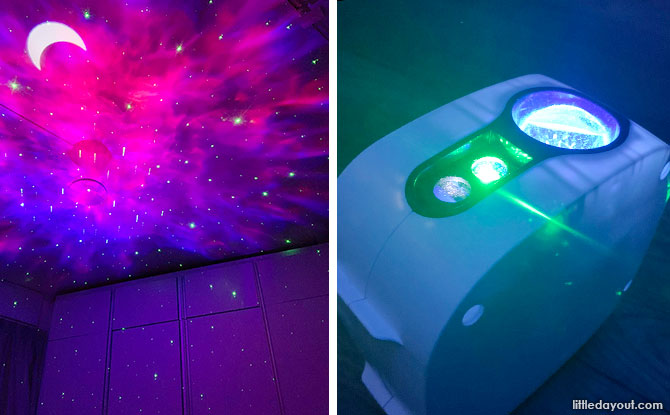 Ever wondered what it’s like to sleep under a galaxy of stars? You can experience it for yourself with the LUMOS MOOD lighting projector.

Homegrown brand LUMOS is no stranger to innovative products and its products have received many satisfied user reviews #supportlocal. In the past, we’ve had a chance to review their projectors such as the ultra-portable LUMOS NANO, a projector that’s around the size of a coffee mug.

This time around, we were given the opportunity to review their new LUMOS MOOD lighting projector. This is a small projector, slightly larger than a book, that bathes a room with a swath of colour. 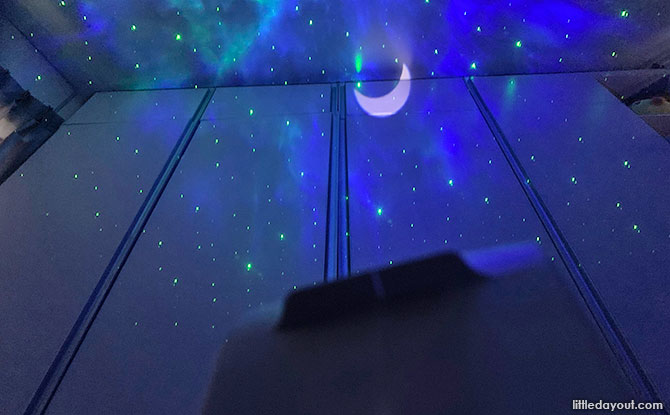 We put the LUMOS MOOD to the test in a bedroom. Placing it in the centre of the room and turning it on, the darkened room was covered with an explosion of light.

The LUMOS MOOD has a tri-colour palette which switches between vibrant reds, blues and greens. The multi-coloured nebula that was cast on the ceiling made us feel as if we had been transported to the deep reaches of space.

Tiny pinpricks of green added stars to the projection. Together, the images swirled around together in a graceful ballet on the ceiling with a projection of a moon. 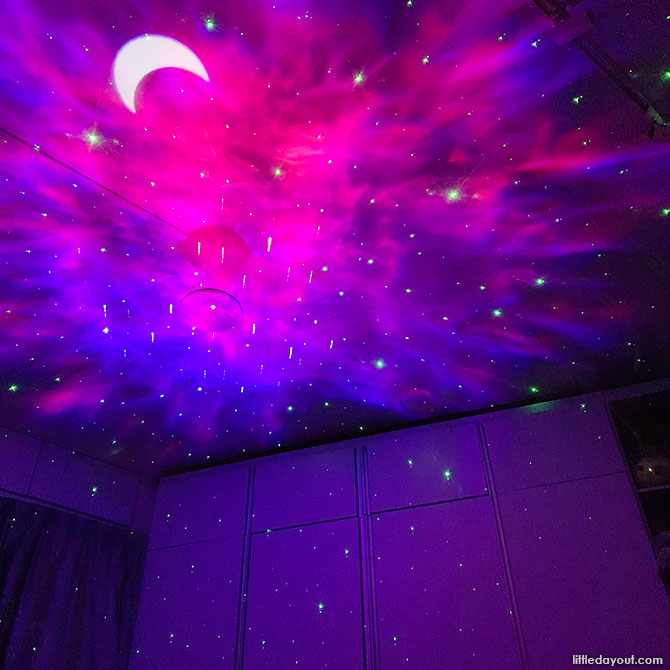 The colours of the LUMOS MOOD were not only vibrant and vivid but we were also surprised to see it projected onto parts of the walls even though the projector was pointed up towards the ceiling. Looking into this, we found out that the LUMOS MOOD has 300 inches of coverage, an ultra-wide projection area that spilled over to the walls of our room.

It should be noted that the LUMOS MOOD can placed in four positions or angles to allow it to be projected either on the ceiling or the wall. 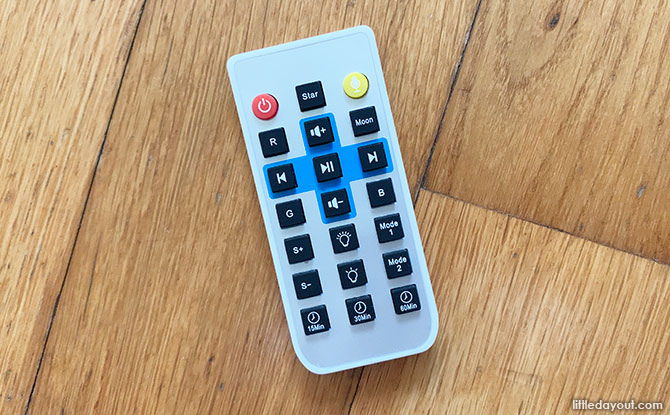 The projector’s remote allowed for even more control over the projection. This includes choosing the colours, deciding on whether to include elements such as the moon and stars, and adjusting the speed of the lighting. These controls allowed us to decide which mood suited us best. 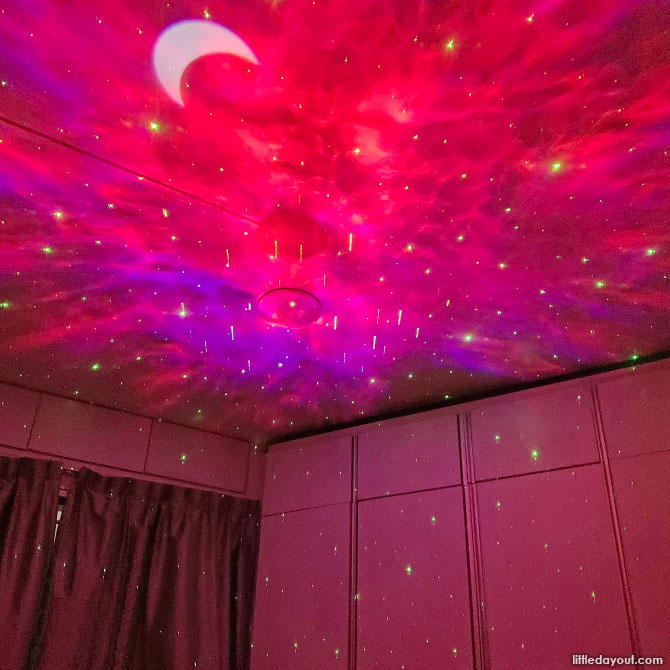 When we originally unpacked the LUMOS MOOD, one concern we had was how the projector would perform in our bedroom since it had a ceiling fan rather than just a blank ceiling. While there was a shadow cast by the ceiling fan when it was switched off (of course), once the ceiling fan was switched on and the blades spinning around, we barely noticed the fan and just ended up entranced by the interstellar nebula glowing above us.

Another feature of the LUMOS MOOD is that it has an inbuilt Bluetooth speaker. Pairing the phone with the projector, the projection syncs up with the beat of the music. This creates an effect which is somewhere between a disco ball and a strobe light. 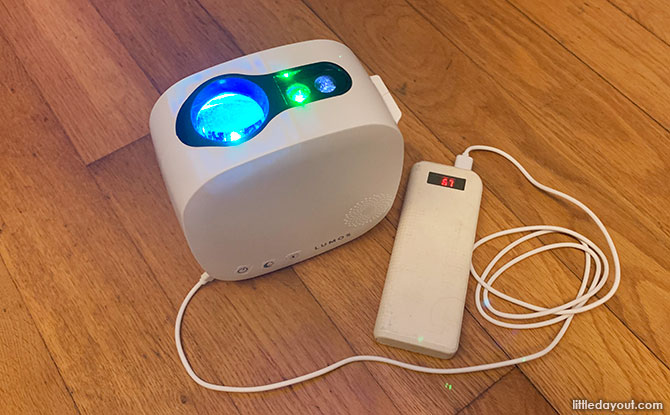 The projector is powered through a USB cable and a plug that goes into the wall socket, just like a mobile phone. This led us to wonder if it could also be powered by a power bank. The answer is yes. This makes the projector portable and it doesn’t need to be tethered to a wall socket.

One small point to note is that we wished the projector casing was built out of slightly thicker plastic. At the moment, it feels a bit light.

Create an Atmosphere in Your Room 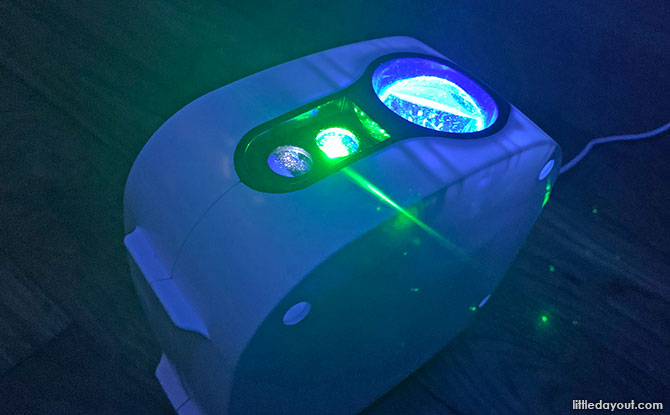 The LUMOS MOOD is an exciting product which easily transforms the atmosphere of any room. It will draw out a “wow” from kids and just about anyone who appreciates pretty aesthetics. You can also pair the MOOD with the NANO projector to watch movies, taking your home cinema experience to the next level.

The LUMOS MOOD is priced at $99 and comes with a one-year local warranty. It can be purchased directly from the LUMOS Projector website and currently only ships to Singapore and Malaysia.

Little Day Out is giving away to two winners:

For a chance to win this prize, simply follow these 4 steps:

This contest has closed. Thank you for your participation!