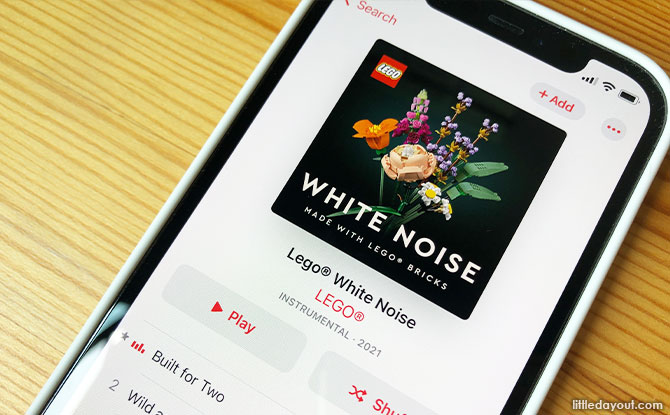 As a kid, one of the best parts of playing with lego was the act of unnecessarily dumping out ALL the lego onto the table with the reason that I could get a better view of what was in the box. (Yes, my chaos showed early on.) Other than pieces flying around the house and me being the cause of fray pieces that were stepped on, it was because I really enjoyed the sounds that the LEGO pieces made as it hit the table. Apparently I’m not the only one and LEGO knows this as it has just released a LEGO white noise playlist.

Although all made with the same material, each track manages to capture unique sounds that one might be less aware of when playing with LEGO.

To make this playlist, LEGO tinkered with over 10,000 LEGO bricks in their quest for “the perfect soothing sound”.

Another thing to appreciate about the playlist is the fun and unique names that each track is titled. The tracks ‘It All Clicks’ captures the satisfying sound of two LEGO elements joining together, and ‘The Waterfall’ was created by pouring thousands of LEGO bricks on top of each other.

All the sounds, minus the mess. Parents, rejoice!

The other tracks are also pretty much audio poetry, such as “Searching for the One (Brick)” which captures the feeling of searching for the one missing piece you’re looking for. (Hint: check under the pillow)

Other tracks such as “Built for Two” is the audio picture of building LEGO together with another person and it includes the rustling of the instruction sheet at the beginning. For those who enjoy rounder sounds and fewer clinks can enjoy tracks such as “Big Hearted Bricks” and “The Night Builder”.

If you too wish to enjoy the sounds of LEGO without having to pick up the pieces after, you can find the playlist on most streaming platforms including Spotify and Apple Music.