Home Events Geronimo Stilton Live In The Kingdom Of Fantasy 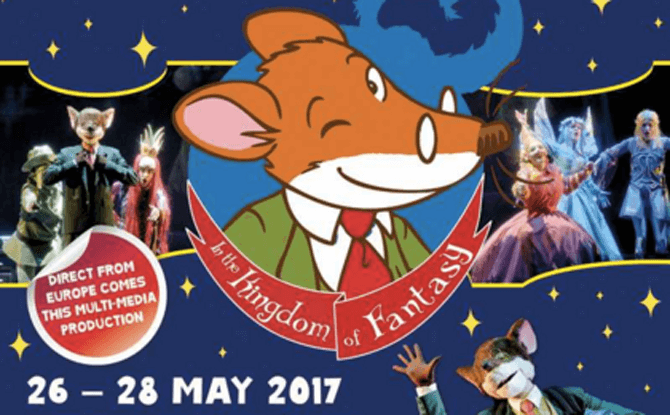 For the first time in Singapore, the popular children’s book hero, Geronimo Stilton, whose adventures has encouraged millions of children to read, will come to life on stage in a brand new musical, Geronimo Stilton Live In The Kingdom of Fantasy!

Based on the best-selling book series Geronimo Stilton and the Kingdom of Fantasy, join Geronimo for his biggest and most “fabumouse” adventure yet as he tries to save the Queen of the Fairies. To succeed, he has to walk through the seven doors that transport him from kingdom to kingdom, bringing him face to face with witches, mermaids, dragons, pixies, gnomes, fairies and a giant! The spectacle is, therefore, a door open to the world of fantasy, with no age limit to cross it.

Fans can look forward to an engaging musical show with strong narrative from the book and a playful mix of live performance and effects. The musical has played to more than 200,000 audience in Spain, Italy, Belgium, Holland and Canada.

Geronimo Stilton Live In The Kingdom Of Fantasy