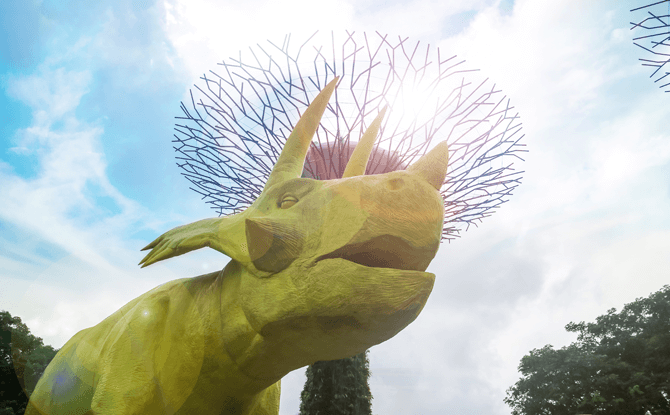 The 2017 March school holidays are here! If you are looking for something to do with the kids, here are four fun festivals and one flea – the Singapore Festival of Fun, i Light Marina Bay, Gardens by the Bay’s Children’s Festival Dye-nosaur Gardens and Festival of Numbers, Sentosa Kidz Flea – taking place during the one-week break for a wonderful March holiday family time. 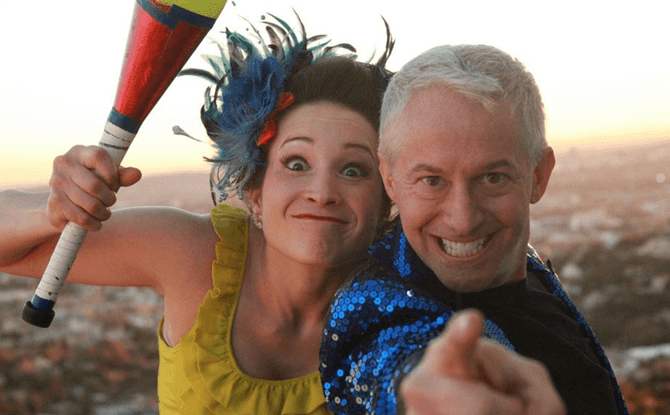 Presented by Clarke Quay, the Singapore Festival of Fun runs from 11 to 19 March and is really three festivals rolled into one.

The Nickelodeon Fiesta takes place on Saturday and Sunday, 11 and 12 March, from 11 am to 7 pm. Enjoy stage games and meet-and-greet session Nickelodeon characters like SpongeBob SquarePants and Leonardo and Donatello from the Teenage Mutant Ninja Turtles.

The Clarke Quay StreetFest take place from Tuesday, 14 March till Sunday, 19 March. From 6 pm onwards, unicyclists, clowns, illusionists will take to the streets to entertain the crowd.

The last is for adults. It is the Magners Irish Cider International Comedy Festival featuring 21 comedians in 10 shows. 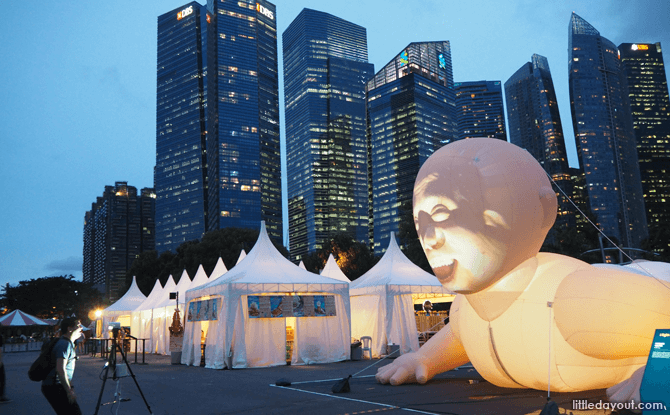 i Light Marina Bay is Asia’s largest sustainable light art festival. Set against the backdrop of Marina Bay, the festival is on till 26 March 2017 and features more than 20 sustainable light art installations. This year, for the first time, it has three themed festival hubs. These include a silent disco for kids and an inflatable park filled with larger-than-life animals and plants. 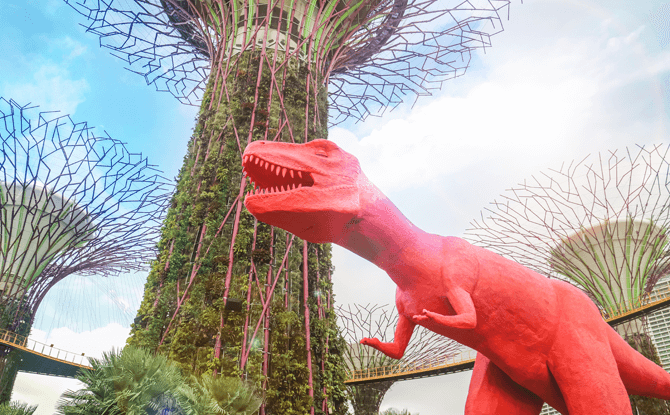 Feast your eyes on multi-coloured, life-sized dinosaurs at Gardens by the Bay’s Supertree Grove from 10 March till 2 April. At Gardens by the Bay’s Children’s Festival Dye-nosaur Gardens, kids can go on a Dinosaur Egg Hunt in the Trail of the Missing Colours and stand to redeem a prize. There will also be interactive storytelling sessions from 13 to 17 March at 4.30 pm & 6.30 pm at the Supertree Grove.

Visit the Far East Organization’s Children’s Garden where activities around the waterplay areas include a Fishing Pond and a Shoot the Dinosaur Game.

If you are looking for “drier” fun, craft stalls have been setup at the Supertree Grove for kids to create attractive crafts such as pipecleaner sculptures and sandart bookmarks.

Ticketed workshops on terrarium making and fossil excavations will also held from 10 to 17 March and every Saturday and Sunday from 18 March to 2 April in the afternoons. These take place every hour between 1 pm to 8 pm. Registration can be done onsite and fees are $20 per participant.

Gardens by the Bay’s Children’s Festival Dye-nosaur Gardens will also feature performances on the weekends. The Lost Colours of the World is a children’s play about Brachy the blue brachosaurus who wakes up to discover that colour from disappeared from the world and Dinocolours water performance incorporates colour to reveal the world of colours. 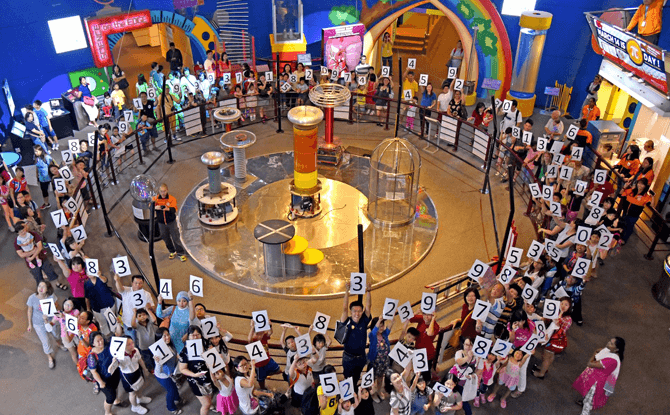 Science Centre Singapore celebrates numbers during the March school holidays with a carnival numbered with fun activities and games. From 11 to 19 March, head to Hall B for the Funfair Math exhibition where you can try out a square-wheeled tricycle, an A-Maze-ing Math trail and learn about patterns, shapes and numbers.

At KidsSTOP, young ones can try their hand at Parabola Art, an activity that combines art with science and play around with 2-dimensional geometric shape to create different images.

Back at the main Science Centre building, there will also be a Gallery Hunt and demonstration on the Mathematics behind the Rubiks’s Cube.

Don’t forget that 14 March is Pi Day either and you can join in to form “the circle of Pi” as everyone counts down to Pi Day at 1.59 pm. 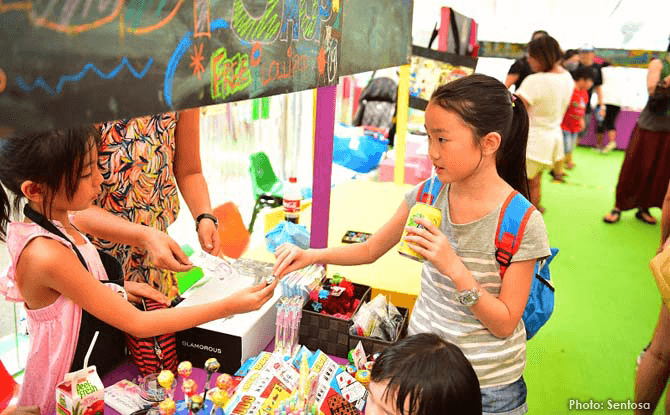 Sentosa KidZ Flea takes place from 11 to 18 March, 2 pm to 7 pm at the Beach Plaza Sentosa. Head down to support children between seven to12 years old who will be selling items such as toys, book and handicrafts. Purchase a minimum of two items from the PLAY-trepreneurs and you can participate in a sure-win tikam-tikam.

In addition, there will be meet-and-greet sessions too.

At the Palawan Pirate Ship, beside the fun water play, kids can also look forward to The Newton Show, an international science show that makes science fun, ventriloquist Explorer Joe and drawing workshops and performances.

Palawan Kidz City will be also be hosting a series of activities and challenges with attractive prizes to be won.

Get the full details here. 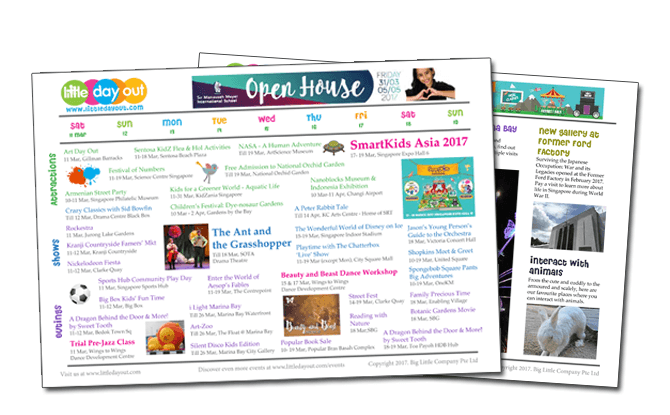 Visit Little Day Out’s March School Holidays 2017 list for more amazing ideas on what to do during the one week vacation and download our FREE guide to the March 2017 school holidays 2017.

Want To Be A Klook Mystery Staycation Shopper? Here’s How.