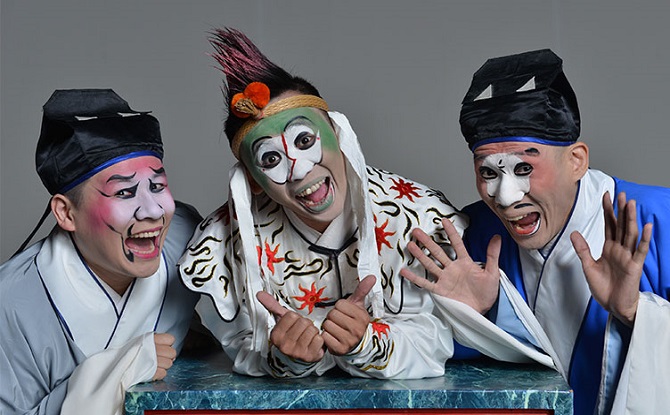 A comic take on a classic tale, told by three Peking Opera clowns through mime, slapstick humour, and of course, Peking Opera!

GuoGuang Opera Company of Taiwan presents The Ghost Seller, their modern interpretation of the allegorical Chinese tale of a man trying to sell a make-believe goat at a market.

Featuring three experienced Peking Opera artists in chou (clown) roles, this genre-bending production is a lively and skilful blend of Peking Opera artistry, comic performance and audience interaction. In The Ghost Seller, the real is often intertwined with the false, and the unexpected is to be expected. The line between imagination and reality blurs as the audience is challenged to figure what is true and what is not.

At its premiere in Taiwan in 2014, The Ghost Seller took Taiwanese contemporary theatre by storm and received widespread acclaim, and was nominated for a Taishin Arts Award. This is one performance that Chinese Opera and theatre-lovers should not miss.

Admission for ages 6 and above.

With English and Chinese surtitles.

There will be a post-performance talk for the 26 Oct 3pm show.