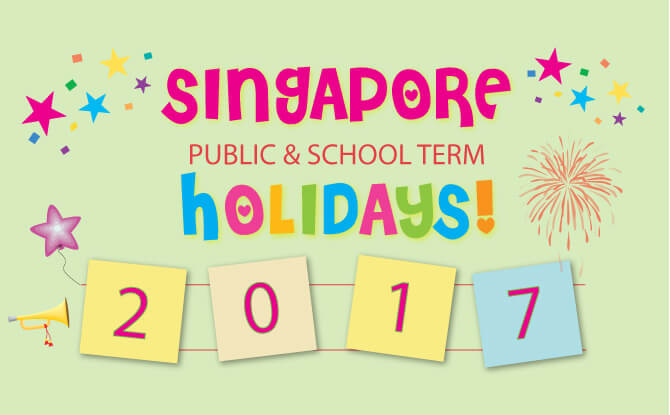 READ: Visiting Singapore with Kids: Best Attractions, Things to See and Do

The kids get an extra day off on the day after National Day. So if you take leave on 10 August as well, you’ll turn that August long weekend into an amazing six-day long weekend!

Teacher’s Day falls on 31 August, Thursday, a day before the Hari Raya Haji. So that’s another four-day long weekend there if you add a day’s leave to join the teachers on their day off!

Take one more day’s of leave on Monday, 3 July in celebration of Youth Day, and on Friday, 6 October for Children’s Day. And you’ll get yet another three-day long weekend to spend with your kids.

READ: Visiting Singapore with Kids: Best Attractions, What to See and Do

Download Little Day Out’s Free 2017 Yearly e-Calendar (PDF) that marks out the public holidays and long weekends, as well as school holidays for primary and secondary schools in 2017! 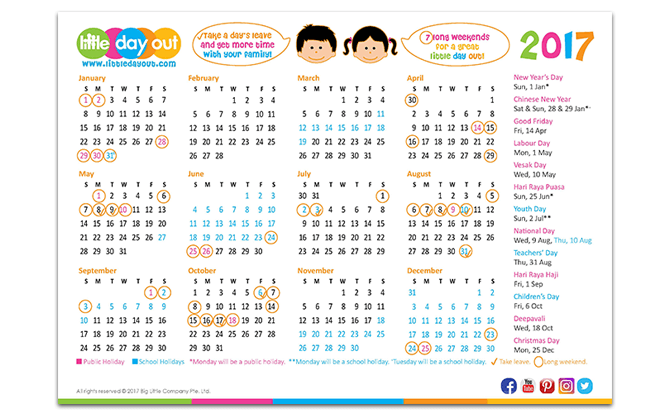 The school year for 2017 for all MOE primary and secondary schools will start from Tuesday, 3 January and end on Friday, 17 November 2017.

* The following Monday, 3 July 2017, will be a scheduled school holiday.
** For primary schools & primary sections of full schools only.

READ: Short Getaways for the Long Weekends in 2017

READ: Visiting Singapore with Kids: Best Attractions, What to See and Do